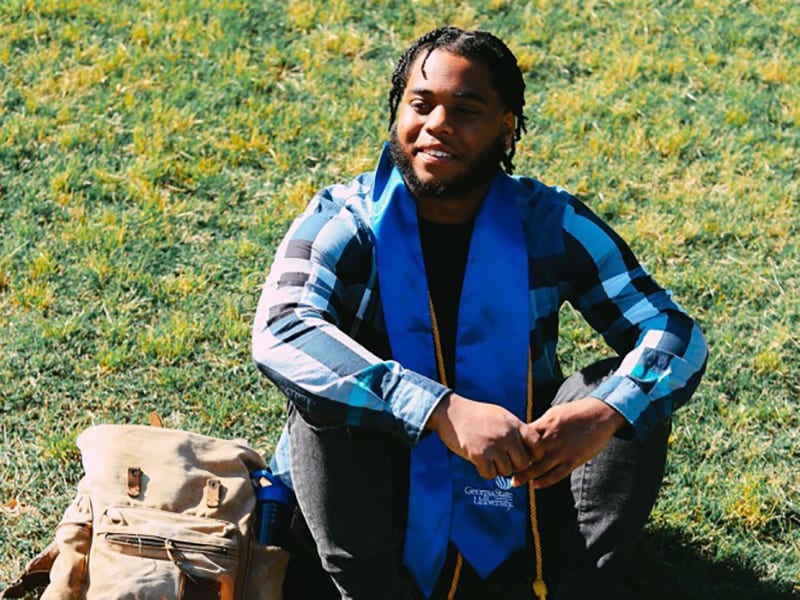 You could say Georgia State University student Lenval Duffus was born to be in politics. His mother, while pregnant with him, worked as a clerk in the Supreme Court of Jamaica.

The family moved to the United States when Duffus was 3, and growing up, his parents encouraged him to commit to making his community a better place.

“My parents taught me that not everything is about you,” said Duffus, who grew up in Snellville and graduated from Shiloh High School.

“My dad taught me that if you see something, you say something and stand up for it,” Duffas said. “They taught me a lot about selflessness. They helped me develop that sense of always looking out for others.”

Duffus, who will graduate this spring with a bachelor’s degree in political science, followed in his sister’s footsteps by attending Georgia State. Once on campus, Duffus said he was encouraged by the diversity of the student population.

In the future, he aspires to run for public office.

“I’d like to run for public office as a local or state representative,” Duffus said. ““I just want to be able to step up for my community and be a positive change, because I want to directly and correctly voice the needs of my community and shift the emphasis of policy away from political party agendas and back on the lives of the citizens.”

Throughout his journey at Georgia State, Duffus has tried to be there for others. As a part of the My Brother’s Keeper program, he served as a mentor to younger black men at the university. Duffus also received the first My Brother’s Keeper scholarship, which included a $1,000 prize.

My Brother’s Keeper, also known as the Georgia State University’s African American Male Initiative, is a partnership program between Georgia State’s Honors College and the Multicultural Center which supports the educational and professional goals of African American male students and provides both mentorship and leadership opportunities.

Duffus said the scholarship will help him as he prepares to apply for law school.

“It was an exciting moment for me and it really helped me out a lot,” Duffus said.

Duffus, who has been accepted into two law schools so far, said he’s currently focused on working at a law firm and advancing his career.

“I want to hit the ground running and make connections before I transition into the political world,” Duffus said. “Going to law school feels like a welcoming into adulthood. It feels like transitioning from a boy into a man. This means a lot for my community and where I’m coming from as a Black immigrant who’s no stranger to the struggle. I want to show people around me that as long as you have the drive and determination, you can make it.”