A weekend trip at the age of 13 changed the course of Myah Vogt’s life.

She attended a wedding at the lush Atlanta Botanical Garden, sipped a mug of hot chocolate at a Midtown café, listened to the ambient sounds of the city and made up her mind to return.

“Despite coming from a family of lifelong Minnesotans, I decided that weekend that I wanted to come and experience just what it was that made Atlanta so magical,” she said.

Vogt’s enthusiasm for Georgia’s capital city is part of what brought her to Georgia State University. In May, she’ll be graduating with Honors College distinctions and degrees in applied linguistics and Spanish. 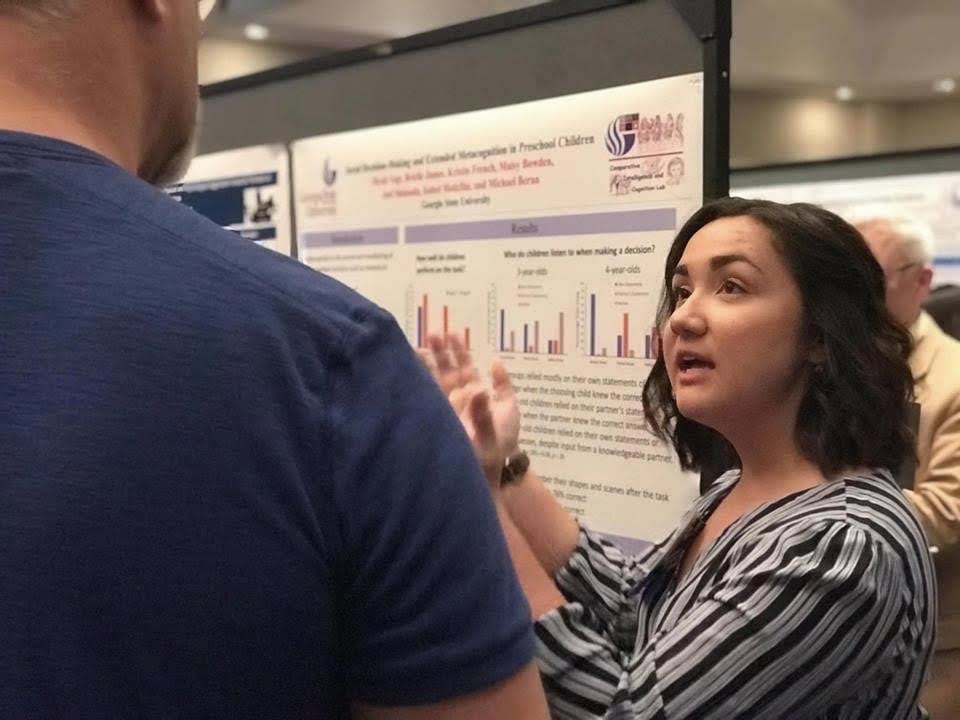 Her next step will be down a path of further exploration into the inner workings of Atlanta. The Woodruff, Whitehead and Evans foundations have selected Vogt to be their 2021 fellow. Vogt is the first Georgia State student to be chosen for this honor.

Vogt will begin her yearlong fellowship in August, working closely with the foundations’ staff to learn about their missions, management and grant-making. Though each foundation has its own board of trustees, all three share offices and personnel.

“You can’t go anywhere in Atlanta without seeing and feeling the impact of the foundations, whether it’s Woodruff Park on campus or the arts center,” Vogt said. “That’s what’s exciting for me about this opportunity with the foundations — they love Atlanta as much as I do.”

Vogt was a competitive candidate because she embodies the missions of the Woodruff, Whitehead and Evans foundations, said Jacob English, director of the Office of Undergraduate Research and Fellowships in the Honors College. English worked with Vogt on her fellowship application and interviews.

“From the moment Myah stepped onto Georgia State’s campus, she has committed herself to being a change agent and servant leader,” English said. “Whether it was helping those with food insecurity, volunteering for local political campaigns or conducting research to improve the lives of those in underrepresented groups, she has committed herself to being a part of the solution and to becoming an impactful leader in the Atlanta community on a broader scale.”

Vogt said she’s also eager to learn about the world of philanthropy and to make use of the data-analysis skills she’s learned through the Honors College’s University Assistantship Program.

“I’m excited to work with the foundations to see how the people stewarding funds use qualitative and quantitative data to make decisions on how to best benefit Atlanta,” Vogt said. “My career goals include figuring out better ways of serving my community.”

During her time as an undergraduate, Vogt has worked as an assistant in the Comparative Intelligence and Cognition Lab of Michael Beran, associate professor of neuroscience and psychology. She studied how non-human primates and preschool children perform tasks to learn more about human evolution, specifically how and when humans acquire certain cognitive skills.

While Vogt acknowledges she has not followed a typical academic path, she says exploring her passions and interests — chiefly language, education, stewardship and cultural understanding — has been rewarding. Through exploration, she has discovered her next calling and developed new skills.

She has honed her leadership style through WomenLead, formulated analytic reporting plans as an intern with the U.S. Army’s Human Language Technology Team, tutored and led virtual school for elementary students during the COVID-19 pandemic, and conducted summer research on contemporary and historical youth literature in Munich, Germany.

“I wish more people knew that they could do things outside of their major,” Vogt said. “Every risk I’ve taken at Georgia State has come with a reward.”