With the unexpected help of a kind stranger, Latonya Young (B.S. ’21) was finally able to finish her associate degree. Inspired by that stranger-turned-friend, she’s about to be the first in her family with a bachelor’s degree.

The story of Latonya Young’s yearning to finish college — and the generous rideshare passenger who helped make it possible — was going viral as she graduated from Georgia State’s Perimeter College in 2019.

She credits her chance encounter with Kevin Esch in 2018 and his help clearing a financial hurdle, as the spark that ignited her drive to finish school. 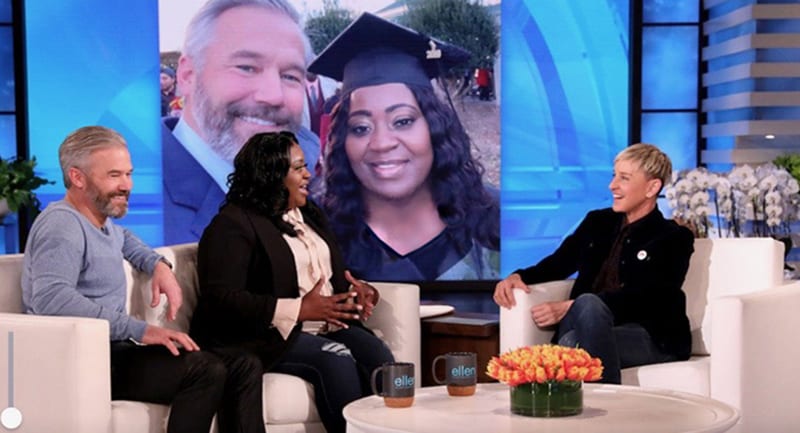 Kevin Esch (left) and Latonya Young on “The Ellen Show” with Ellen DeGeneres.

In a January 2020 appearance on “The Ellen Show,” they talked about their budding friendship and Young’s college goals.

“Kevin is like my Power Ranger,” Young said. “He has really inspired me to excel in the classroom and in life.”

Esch met Young, a 44-year-old single mother of three sons, while seated in the backseat of her car. Young was a rideshare driver, struggling to make ends meet while also working as a hairstylist. She’d picked up Esch, an estate manager in Atlanta, after he attended an Atlanta United soccer game.

During the drive, they talked about a variety of things, including the reason Young had stopped studying at Perimeter College after finally getting her General Educational Development degree. She explained to Esch there was a hold on her college account because of an unpaid bill.

Young also shared that whenever she saved enough to pay the bill and re-enroll, she’d have to redirect the money to family needs or medical bills from surgeries she’d undergone.

They exchanged goodbyes, with Esch wishing Young well and asking for her business card. The following week, he visited Georgia State and paid off the $693 that Young owed the university, paving the way for her to start school again.

The story gained widespread attention, starting with an article in The Atlanta Journal-Constitution, which was followed with features by People, CNN and ABC’s “Good Morning America,” as well as international media outlets.

Esch was in attendance as Young graduated from Perimeter College with an associate degree in December 2019. And he’ll be there again, May 6, when she is the first in her family to receive a bachelor’s degree.

“I am so incredibly proud of Latonya for following through on her goal of finishing college,” Esch said. “She’s managed to do this through health complications and a pandemic while working and homeschooling. She has changed her life and the lives of her boys forever.”

A lot has happened since Young first met Esch. She’s become a substitute teacher, moved out of subsidized housing and written an autobiography. She also nabbed an internship with Six Flags Over Georgia in its security department, and won a scholarship from the Jeannette Rankin Foundation, which awards money to older students like Young to attend college.

She also used part of the $25,000 she received during her appearance on “The Ellen Show” to pay off college loans.

Her middle son, Jakobe Young, is now following in her footsteps and has begun studying business administration at Perimeter.

Young says she’s a long way from the girl who dropped out of high school in Tifton, Ga., and found herself in trouble with the law for fighting, unwittingly writing bad checks and generally heading down the wrong path.

Young’s ultimate goal is to use her criminal justice degree to work as a federal parole officer. She also wants to use her life story to encourage others to stay in school and on a positive path.

While the media attention surrounding Esch and Young’s story has died down, Young is committed to continuing to make Esch — and herself — proud.