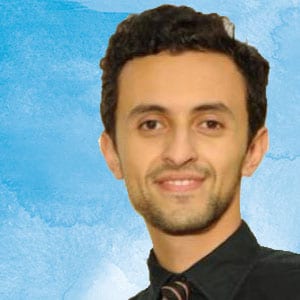 After working as a financial analyst for a recycled paper and packaging company for nearly five years, Youssef Zniber decided to make a career pivot. To do so, he needed more technical skills. He enrolled in Robinson’s M.S. in Quantitative Risk Analysis & Management program, but worried about balancing school and his day job. The graduate research assistantship (GRA) he landed in the college’s Department of Risk Management & Insurance (RMI) allowed him to focus on his studies.

“If I kept working, I wouldn’t be able to fully delve into the courses. I’d just be going through the motions,” Zniber said. “Once the GRA position happened, I took the plunge.”

Zniber has completed a wide range of projects as a GRA. One semester, he designed online marketing materials for the RMI department’s academic programs. Also as part of his assistantship, he and a group of other GRAs partnered with BDO Consulting to automate the company’s cash flow. The firm had been using multiple spreadsheets to evaluate deals, including the probability of loan default. Using Python, Zniber and his peers delivered a single, simple interface to the client.

For Zniber, learning Python in the first place posed a big challenge.

“I struggled a lot in the beginning. The learning curve was really steep,” he said. “By the end of the semester, I started seeing the light at the end of the tunnel.”

The class was Data Programming with Xiangshi Yin, a senior data scientist at Cox Automotive who also teaches part-time at Robinson. The concepts started clicking through hands-on projects. One assignment involved building a model to calculate the cost of health insurance based on patient characteristics such as marital status, number of dependents, body mass index, and smoking habits.

Another super practical course was Econometrics with Nguedia Pierre Nguimkeu from Georgia State’s Andrew Young School of Policy Studies. Using the programming language Stata, Zniber predicted the value of soccer players based on traits including height, weight, speed, left versus right footedness, and dribbling as well as shooting skills. The data set came from FIFA.

By the time Zniber graduates in December, he will be well-positioned to expand his career options. The skills he has developed in modeling and data analysis will be a big asset to employers in practically every field.

“Data is anywhere and everywhere,” he said. “I’m open to a job in any industry, as long as there are insights for me to create.”