From the Weight Room to Wall Street 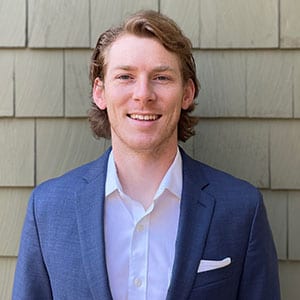 Investment banks heavily recruit talent from Ivy League schools. Students from state schools have to work harder to land those coveted roles. Blake Phillips, a December 2020 graduate from Robinson’s M.S. in Finance program, treated networking and cold emailing employers like a side hustle. The relentless pursuit of his goal paid off. He starts as an investment banking analyst at Truist Securities in July.

Hands down, the best part of Phillips’ academic experience was Panthers on Wall Street, a highly selective program that positions Robinson students to compete for jobs in America’s financial district and beyond. The initiative includes six months of intense preparation and culminates in a four-day excursion to major companies in New York City. The pandemic prevented the 2020 cohort from making the trip. But through virtual meetings, Phillips interfaced with recruiters from firms including Bank of America, Goldman Sachs, HSBC, JPMorgan Chase, and Moody’s.

“Panthers on Wall Street opened a ton of doors,” Phillips said. “I got introduced to so many people who looked over my resume, gave me interview pointers, and let me into their networks. I 100 percent recommend the program to anyone who wants a banking, private equity, or fintech job.”

Phillips’ coursework was super practical as well, particularly Financial Statement Analysis and Loan Structuring with Clinical Associate Professor Richard Fendler. Through case studies, he learned how to pick apart a company’s financial statements to determine whether rendering a loan would be wise. For his final project, he evaluated the financial health of a company from start to finish: things like whether the company could handle taking out credit and whether he recommended buying that stock. Phillips selected a company that specializes in handmade apparel, and aims to pivot from a brick-and-mortar shop to an online sales platform.

The knowledge Phillips built through Fendler’s class came in handy during his final interview at Truist Securities. When a vice president on the interview panel asked him to pitch a company, Phillips chose Wells Fargo. At the time, Wells Fargo stocks were trading at $22 per share; now, they are valued at nearly $40 per share.

“Professor Fendler taught me how to evaluate a company by considering the quantitative facts, such as its financial state, as well as the qualitative backdrop, which is the overall long-term trajectory of a company and the industry,” Phillips said. “Wells Fargo is going through a turnaround under the leadership of a new CEO. I thought the market pricing wasn’t aligning with those efforts, and it turns out the vice president agreed with my thesis.”

One might say Phillips was a different person when he enrolled in the M.S. in Finance program. After earning an undergraduate degree in kinesiology, he started a personal training business. He started reading the Wall Street Journal and found himself watching the stock market during breaks between personal training clients.

“When I began listening to the quarterly conference calls of the companies I was following, I knew it was time for a career change,” he said.

Phillips stepped away from the personal training gig and got involved in his family’s bakery businesses around the state: three Smallcakes Cupcakery locations in Augusta, Marietta, and Smyrna as well as Honeysuckle Biscuits & Bakery in Kennesaw.

“We took Honeysuckle from idea to entity. We did everything from writing recipes, to collaborating with the architect who designed the place, to meeting with banks,” Phillips said. “It was really cool to witness the ideas we discussed over the dinner table become a real store that serves people seven days a week. I felt like I was witnessing the American dream.”

Phillips put all his energy into graduate school upon acceptance to Robinson. He secured internships for every semester of 2020, leveraging each of them to secure the next opportunity: positions at a corporate finance firm, boutique valuation advisory firm, and then a leading valuation advisory firm. Through those roles, he gained the experience and confidence he needed to make a major career pivot.

“I went from being a personal trainer who knew nothing about finance to becoming an investment banking analyst,” Phillips said. “It took a lot of hard work, but I could not be happier with the outcome.”