Game On
Use Scan QR Code to copy link and share it
Junior Brayden Henrichsen is helping Georgia State’s esports program continue its streak of excellence as coach of the SMITE team.
By Michael Davis (B.A. '03)

As a coach for one of Georgia State’s esports teams, Brayden Henrichsen’s name doesn’t show up on the leaderboards, but in his first year at the helm he helped the SMITE team return to the American Video Game League (AVGL) national championship. 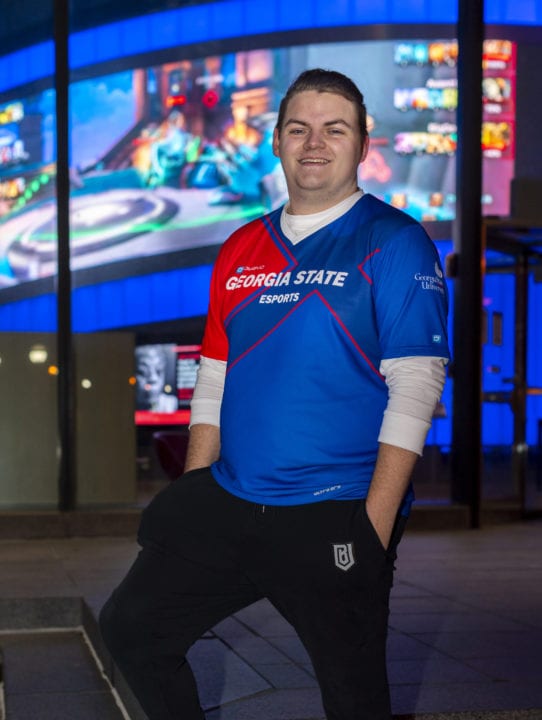 Georgia State’s SMITE team lost to Arizona State in January in a rematch of last year’s title game, marking its first loss in the game in two years. Georgia State had to get past about 40 other colleges and universities from across the country during preliminary rounds last fall to advance to the title game. And though it wasn’t the outcome the team was hoping for, the second-place finish continues three years of successes.

Henrichsen, 20, has been a gamer since junior high school and has years of experience in games like SMITE and Paladins. As a freshman at Georgia State, he and a friend from his graduating class at Carrollton (Ga.) High School tried out for and won spots on the varsity Paladins team.

Now a junior at Georgia State majoring in game design/development with a minor in Japanese, Henrichsen is hoping to land a job after graduation with a major game maker — perhaps one in the Atlanta area. He believes having a background in Japanese will also make him an asset to big game-design studios based in the Far East.

“I moved a couple times during high school, so gaming was a way to keep in contact with friends when I wasn’t in the same state anymore,” Henrichsen said. “It’s also a way to get a break from the everyday stresses of life and escape for a little while.”

After leaving the Paladins team during his sophomore year, Henrichsen rejoined the esports program as a coach in 2020 to oversee the reigning champion SMITE team. With most of the team’s members having been together since the esports program’s founding in 2017, Henrichsen wanted to contribute to its success without disrupting a winning lineup.

“They have the game-play stuff down pretty well,” he said. “For three years they’ve been playing together on this team, but some of them knew each other in high school. They go back, in terms of being friends, and they’ve all got a really good relationship with each other.”

Following the disappointment of the AVGL finish, the team is turning its attention to this season’s remaining tournaments, including an invitational hosted by Illinois State University. It will also compete in the spring PantherLAN tournament hosted by Georgia State, which attracts teams from across the Southeast.

“With AVGL not ending the way we wanted it to, we’re hoping for a good ending at another tournament,” Henrichsen said, adding he’d like to continue coaching next year as the team undergoes possible lineup changes. “Most of these guys who are starters on the team are getting ready to graduate after this semester, so the team is probably going to see a pretty big overhaul.”

Georgia State’s varsity esports program is housed at the Creative Media Industries Institute. With teams dedicated to five different games, it has a combined roster of about 30 players.