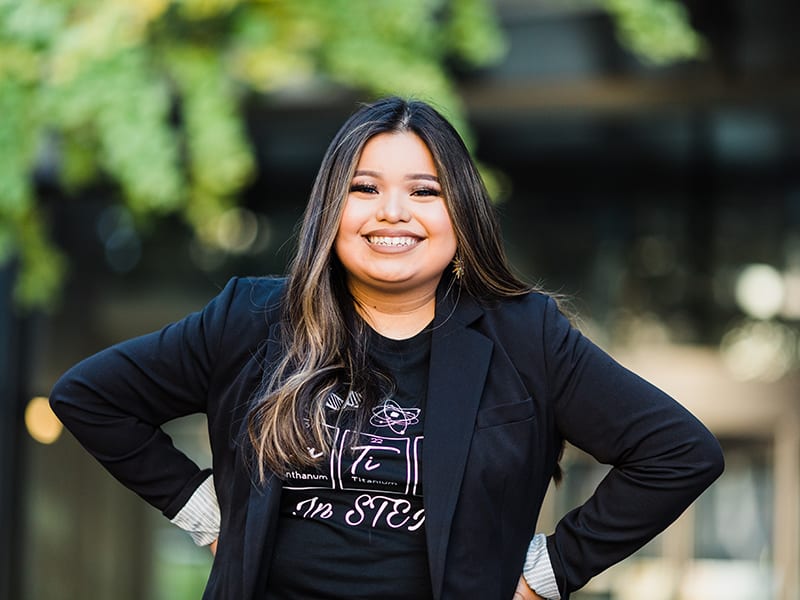 The year that Bernabe Becerra was finishing middle school, she got terrifying news — her mother was diagnosed with stage four breast cancer.

Becerra found herself accompanying her mother, Eduarda Santillan who is originally from Mexico, to numerous doctors’ appointments.

“I had to translate for my mother and try to explain these medical terms to her so she could understand what was happening,” Becerra said.

“That was very difficult for me,” she said. “I had to try to process my mother’s condition and translate what the doctors were saying. I just remember crying a lot of nights and going with her to her chemotherapy sessions.”

Becerra describes that time in her life as a period of resilience and faith, despite the fear of losing her mother. It was also the time when she became intrigued by the medical profession.

This week, she graduates with a bachelor’s degree in biology, becoming the first woman in her family to graduate college, and plans to go to dental school.

Becerra said she was in awe of how many people were involved in her mother’s cancer treatment.

“My mom is a warrior and watching her go through that made me feel like I could do anything,” Becerra said. “I decided that science is what I wanted to do, so I went all in. …I wanted to continue to pay it forward.”

Due to the COVID-19 outbreak, Becerra has not been able to meet with students in person in 2020, but thanks to technology, she has continued to connect with the community through the program.

“I became a better communicator through that program,” Becerra said. “We want the families to learn along with the students.”

Becerra is also the vice president of the multicultural Greek council and a member of Omega Phi Beta Sorority Inc. She helps raise money for women who have suffered from domestic violence and donates her time to distribute food to the less fortunate.

During the tough times in her college experience, Becerra relied on her mother for inspiration. Becerra’s mother, who works as a custodian at Georgia State, often talks to her daughter when she’s feeling down.

“She’s one of my number one supporters,” Becerra said. “Seeing her work every day really motivates me to continue what I’m doing.”

Becerra also wants to be an inspiration to the Latinx community.

She plans to become a dentist after seeing the lack of Latinx representation in the field.

“Being able to graduate feels amazing,” she said. “It feels like ‘Wow, I finally made it.’”