In The Classroom: Learning How Aging Works And What ‘Successful Aging’ Looks Like 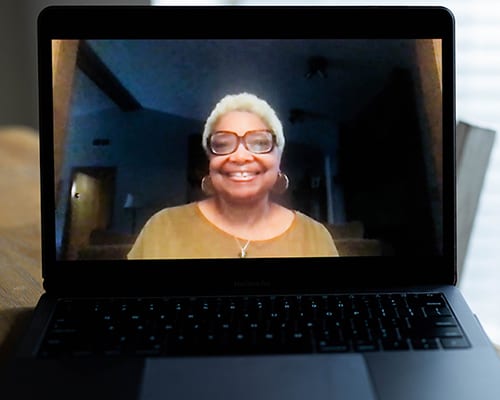 In this occasional series, we ask instructors to discuss how they engage students in the great questions of our time.

Q. What made you interested in teaching this subject?

A. I went back to school in the 62+ program at Georgia State, which offers tuition waivers to people 62 and older. I was offered a position to teach Psychology of Aging after receiving my Masters in Gerontology. This Psychology of Aging class is not your typical psychology class; it looks at the biopsychosocial aspects of aging, which is so cool because it looks at everything from a physical to psychological, or cognitive, function to your social network and how each part places an importance in the aging process.

So this class is really important to me because it gives a view through the lens of real life, of how people are really aging—how their body is aging, their mental capacity is aging, and also their social network is dying out, too, as they’re aging.

Q. Which aspects of your class do you think your students find most interesting?

A. Well, they’re surprised when they really understand the aging process because everyone has an older relative — a grandmother, grandfather, or aunts or uncles. So they’re learning something about the physical and mental capacity changes that take place. But we also discuss successful aging and how people are aging successfully—they’re deciding on what they want to do and when they want to do it. A lot of older people are going back to school, so students always say “this is not what I thought you guys would be like. I envisioned that as you aged, you would be doing something at home, as opposed to going back to school in your seventies and running marathons in your eighties.” So they’re shocked.

Q. What goals do you set for your students in this class?

A. I expect them to learn one thing about an older adult as they’re aging. Pick something—whether it be cognitive, whether it be personality, whether it be life span—and interview an older adult about that topic. I love having students write reflections because we’re online, and I read every reflection, so that tells me that they’re thinking about whatever they’re reading. Whether the chapter that week is looking at cognitive health, personality, health and aging or prevention.

Q. What can students expect to get out of this class?

A. Students can gain a better understanding about the older population from a biopsychosocial perspective. One of areas that are discussed include mental health, which is a major issue for me within the older population; depression and other mental disorders are concerns for the older population. Another area that is covered is successful aging. Students are always shocked that older adults are still living rewarding lives and are aging gracefully either by returning to school, running marathons, or fulfilling a lifelong passion that may not have had time for early in their lives. The final area is death and dying; this is an area that no one wants to discuss. Students were able to look at this topic based on their culture or religion, realizing that everyone takes dying differently especially when religion or culture is involved. Students come to understand that there’s a lot of diversity in it, as well.

Some of students are very interested in Dementia and Alzheimer’s, and they’re interested in that because they know that is a major issue within the older population, and at one point, somebody that they know will have it. Students gain a real insight into this disease when they have to complete the Memory Tape assignment which looks at this disease through the lives of multiple individuals that have the disease in different stages.