In The Classroom: Professor Asks The Literary Question, “Is It Possible To Find Beauty In War?” 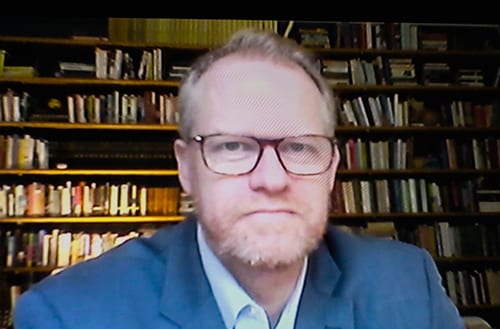 In this occasional series, we ask instructors to discuss how they engage students in the great questions of our time.

Q. What made you decide to teach this subject?

A. As a professor of medieval literature, I specialize in literature from a period that is often viewed inaccurately as an especially violent time. Think about any time someone today describes anything as “medieval” – they mean backward, ignorant, and cruel. Historical documentaries often focus on the castles, the armor, the weaponry — the apparatus of medieval war that stand for it in our imagination. Focusing on only the most apparent images doesn’t help us really understand something, it creates a simplistic fantasy that robs a complicated society of all its depths and nuances. I wanted to create a class that would focus on a problem that belonged to all ages but which is usually assumed to specially characterize the Middle Ages. One of my goals was to place medieval war and the literature it inspired into a wider context. Far from simply accepting or glorifying war, medieval literature offers complex responses just as modern and ancient literature do.

Q. What are some of the goals you set for your students?

A. On the whole, our society thinks of literature as something ornamental and enjoyable, something that we should learn to appreciate but which doesn’t matter in any practical sense. In all my classes I want to place this very recent idea in historical context, so that my students appreciate both that literature is a “socially symbolic act” and that for most of literary history both authors and readers saw literature as an important contributor to public discourse about crucial matters.

Q. Which aspects of your class do you think your students find most interesting?

A. War seems constant and inevitable. Most undergraduates now were born into a post-9/11 world.  Anxiety about and responses to terrorism, conflict in Iraq and Afghanistan, PTSD and other effects on military families have played an important role in their experience, just as the rightness or wrongness of various military actions is a theme that persists in global, political debate.

My students come to class already thinking about war and looking for perspective just as thinking people always have. Students have specifically expressed a lot of fascination with the graphic and emotionally raw “poems of witness” written by British Soldier-Poets during World War I. They report that, though they have previously learned a lot of historical details about specific wars, they had never encountered anything that brings home so clearly the impact of war on combatants. They are also fascinated by a specially literary question. Namely that, since war is certainly horrifying but one important goal of literature as an art form is to find or create beauty, we have to ask “is it possible to find beauty in war?” Many representations of war have captured a strange, compelling, aesthetic in it. War provides opportunities for heightened experiences and feelings, for loyalty, bravery, and compassion, that we can find stirring despite our rejection of violence.

Q. What can students expect to get out of this class?

A. Historical and philosophical perspective on both intellectual beliefs about war (for example, the medieval origins of the theory of “Just War”) and the social-psychological impacts on individuals, not only combatants but others affected by the rippling consequences of violence, like grief and displacement. We find these in works from throughout literary history.