ATLANTA—Adam Segroves has worked 14-hour shifts with few days off for the past month, hiking in extreme heat and smoke to advise firefighters on the best way to suppress wildfires in California while protecting sensitive archeological sites.

Segroves, a master’s student in anthropology at Georgia State, works as an archaeological technician and fire archaeologist with the Hat Creek Ranger District in California’s Lassen National Forest. 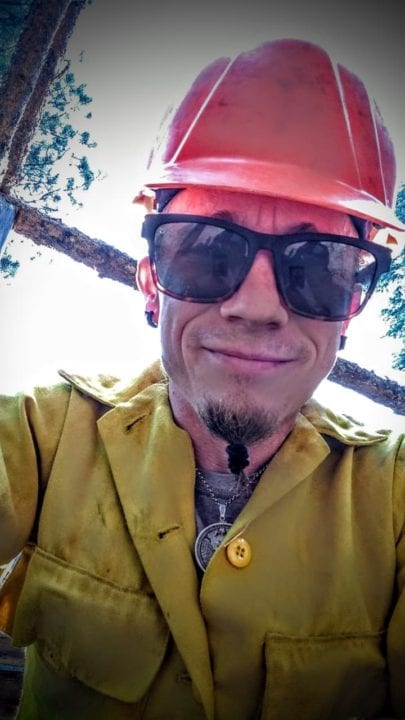 “It’s my job to protect the cultural resources through the implementation of these projects,” Segroves said.

His job has shifted lately to protecting these sites from wildfires. Whenever a fire breaks out at the Lassen National Forest or a neighboring forest, Segroves advises firefighters on the best way to protect archaeological resources in the area. Firefighters then adjust their fire suppression efforts based on the information they get from Segroves, who is also a trained firefighter.

“We try to mitigate the damage that does accrue during suppression activities,” Segroves said. “I try to advise them on how to do their absolute best on fighting the fire and having a minimum impact on the area.”

Segroves has been busy this year. California has been devastated with wildfires, including five of the six largest wildfires in California history over the past month. Since the beginning of the year, there have been more than 8,000 wildfires that have burned 3.6 million acres, according to the California Department of Forestry and Fire Protection.

On days when there is a wildfire, Segroves will work 12-16-hour shifts, seven days a week and sleep in a tent near the hot zone. He holds morning meetings with a resource adviser and the fire department to develop a plan to avoid archeological areas or at least minimize the impact to those areas during fire suppression.

Throughout the day, Segroves and his team may walk directly in front of a bulldozer that’s carving out a fire break to make sure it avoids archeological material. He also gathers data about fire suppression plans and creates preliminary assessments for sites that have burned.

“It has been really busy,” Segroves said. “Of the past eight weeks, I’ve been on wildfires for six of them. It’s been pretty intense and the days can get kinda long.”

After graduating from Georgia State with a bachelor’s degree in anthropology in 2013, he moved to California in hopes of finding a job at a national forest. He landed at Lassen National Forest in Susanville, Calf.

After starting the job, Segroves was in a motorcycle accident that almost killed him. He injured his spinal cord, broke three ribs, broke his lower back and spent a week in an intensive care unit. Then he spent a year in physical and mental rehabilitation.

During his time in the hospital, Segroves decided to set a goal for his recovery process — achieving firefighter II certification. The certification process included having to hike three miles at high altitudes wearing a 45-pound backpack.

“I passed the test a year after my accident,” Segroves said. “I did it with a reconstructed shoulder and I had to learn how to walk again. My experience made everything worth it. My dad always said nothing good comes easy.”

Segroves, who is studying remotely this semester, plans to get his master’s degree in anthropology to make him more competitive for higher level leadership jobs with the U.S. Forest Service.

When he’s not studying, he’s helping firefighters on the Plumas National Forest in northern California, which is engulfed in a 300,000-acre wildfire.

“To be a small cog in the big machine that’s protecting California’s wildland and forest, it’s a highly rewarding experience both personally and professionally,” Segroves said.