ATLANTA—One of television’s most popular court and crime networks is back, thanks in part to the efforts of Georgia State alumnus Scott Tufts.

Tufts (B.A.‘89), who earned a Communication degree, became CourtTV’s senior vice president in January and was instrumental in the efforts to bring the all-day, every day true crime and legal journalism network back to life.

“We really started from ground zero,” Tufts said. “We had to figure out how to build this, how do we train and develop our employees? We had to review video servers and trucks in the field. It was extremely challenging, but exciting. Some days you have to pinch yourself and think, ‘Did we really pull this off?’ But we did it.” 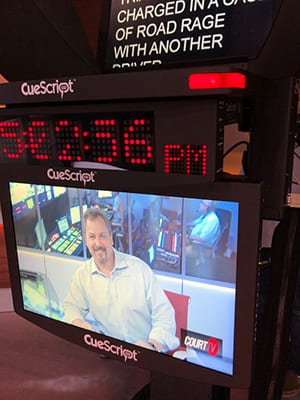 Once the relaunch was complete, Tufts and CourtTV were faced with another challenge—the ongoing outbreak of COVID-19. For more than two decades, CourtTV became a household name by covering high-profile court cases involving the Menendez brothers, Casey Anthony, O.J. Simpson and others.

With the threat of the coronavirus, many jury trials throughout the country have been on hold.

“We had to use new technology and find new ways to make our programming stronger and better,” Tufts said. “It’s going to take some time for courthouses around the country to get back to a point where they feel comfortable bringing citizens in to serve in juries, so we have to get creative.”

Tufts said CourtTV is covering other aspects of cases that do not involve juries, such as preliminary hearings. The network’s upcoming programming will also include coverage of recent social justice trials such as the case of George Floyd, a Black man who was killed by police officers in Minnesota, as well as the trial involving the killing of Ahmaud Arbery in south Georgia.

“There are still very strong stories to be told,” Tufts said. “It’s really important if you’re in the content business to always find creative ways to serve the public. Any business has to adjust to this pandemic and we’re no different. We have a fan base and we must adjust.”

Tufts studied broadcast journalism at Georgia State and his first job in the industry was at the Atlanta Journal-Constitution (AJC), which had its offices in downtown Atlanta at the time. Tufts also worked as a tour guide at cable news giant CNN. That was the start of a 21-year career at CNN, where he climbed the ranks to executive producer, including working for Larry King Live and the current events debate show “Crossfire.”

“I got that job at the AJC because I could literally walk from campus to the AJC and do a cold-call interview,” Tufts said. “It’s incredible to think about.”