It’s a pharmacy technician’s job to make sure medical personnel have the medications they need to take care of their patients.

Candy Sydney has been a pharmacy technician for eight years and in that time, she’s prepared IVs, epidurals and syringes, filled Omnicell medication distribution machines, delivered specific medications to nurses and doctors, and other important tasks.

She’s spent the last four years working at Emory Midtown and has felt increasingly anxious during the COVID-19 pandemic that began earlier this year.

“You don’t know who you’re coming in contact with – even when delivering medicine directly to nurses, it creates anxiety,” Sydney said. 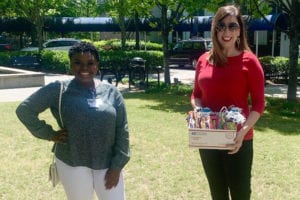 But she’s found hope and positivity in the College of Education & Human Development as an early childhood education student preparing to become a teacher – a goal she’s had for years – and in her conversations with Clinical Associate Professor Laura Meyers, who has collected and delivered more than 80 masks to Sydney and her colleagues since the pandemic began.

“We met up outside the hospital and I had her on FaceTime so my co-workers could meet her and I could explain to them how I was getting these masks,” Sydney said. “That has really brought a lot of joy to our department – knowing that someone thought of us and took the initiative to help.”

While she appreciates the impact she can have as a pharmacy technician, Sydney believes her purpose lies in becoming a teacher. This became most clear to her in one of her recent student teaching experiences, when she shared a children’s book she’d written about Haitian culture as a class assignment with the students in her class.

“It felt amazing that I could reach a group of kids who don’t necessarily see that many Haitian books,” said Sydney, who is Haitian herself and didn’t see her culture reflected in books from her childhood. “I shared that book with my students and they fell in love with the story, but they also wanted to write and publish their own books. The spark that I saw in the kids’ eyes was amazing.”

As she continues her work at Emory Midtown and stays in touch with Meyers, Sydney is inspired to continue her educational path and show the same compassion for others that she’s experienced in the last few weeks.

“As teachers, our work is never done. We have a heart to help and that doesn’t remain in the classroom or in the buildings at Georgia State – it extends so much further,” she said. “Dr. Meyers has really been a blessing and I hope I can emulate the kindness she has shown me to others.”