After delaying higher education while she worked and raised a family, Moniquekia Thompson will graduate from Georgia State this week alongside her daughter, Sierra Jenkins.

When Moniquekia Thompson graduated from high school in the 1990s, she was pregnant with her first child. She went to work, earning a living to raise her family and, consequently, delayed her dream of continuing school.

But this week she will don a cap and gown alongside her daughter, Sierra Jenkins, as the two graduate with bachelor’s degrees in the same Georgia State commencement. 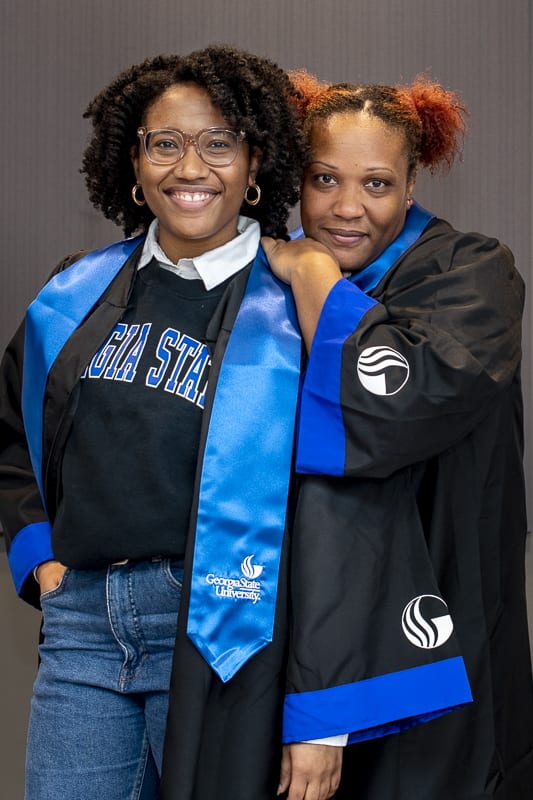 Sierra Jenkins (left) and her mother Moniquekia Thompson will graduate together Dec. 19.

Though she delayed attending college, Thompson said she always stressed the importance of education to her daughters. Jenkins was born not long after Thompson graduated high school and her sister, Auri Jenkins, came along a few years later.

Thompson enjoyed a career in residential management in Norfolk, Va., while raising her daughters, but in 2014 she moved to Georgia after losing her job.

“I had to start over,” Thompson said. “I had family here that was willing to help me.”

The two toured Georgia State during one of Sierra’s visits, and mother and daughter decided to enroll.

And though the two started out pursuing accounting degrees, both changed their plans during their time in school and declared different majors. Sierra said she and her mom rarely saw each other on campus because of their different schedules, but even after she moved in with Thompson following her first year, her mother allowed her to find her own way.

Thompson said she wasn’t aware she would be eligible to graduate until after Sierra mentioned she would finish her degree this year. Thompson said she talked with an adviser and learned she, indeed, would be able to finish at the same time as her daughter.

At first, Thompson was going to forgo the opportunity to walk across the stage during her own graduation ceremony. Because of where their last names fall in the alphabet, Sierra was assigned to the morning College of Arts and Sciences ceremony and her mother was assigned to the afternoon commencement.

Thompson asked to have her allotment of tickets to the ceremony transferred to the morning commencement so she and other family members could attend Sierra’s graduation. But instead, Georgia State reassigned Thompson to the morning ceremony so the family could watch both graduates walk in the same event.

“I was surprised that it was even an option,” Thompson said.

After graduation, both mother and daughter have designs on applying to master’s degree programs. Sierra plans to work as a freelance writer while researching graduate programs in African American studies. Thompson, who works as a dispatcher for the Gwinnett County Police Department, wants to transition into a human resources role and to eventually pursue a master’s degree in art or communications.

Sonja Lassiter has known Thompson for more than 20 years, since the two were classmates in high school. She is also Sierra’s godmother and is proud of both mother and daughter.

“The goal is for them to do better and be better,” Lassiter said. “And that’s what [Thompson] set out to show.”