DECATUR, Ga.—Georgia State University’s Perimeter College graduated its first group of State Farm Scholars at its Decatur Campus this week, two years after the university began the first-of-its-kind program to help low-income students from DeKalb County schools on their path to graduation.

Students in the program received tuition, academic advising and the full suite of Georgia State’s student success programs as part of a $14.5 million grant from State Farm. Nearly 85 percent of the students – 33 of the 39 – received their associate degree from Perimeter in two years and are transitioning to four-year degree programs. They graduated at nearly 10 times the national average for students pursuing associate degrees.

“This program, with its absolutely transformative results, again shows that demographics are not destiny,” said Tim Renick, senior vice president for student success. “In many cases, these are students who would not even have attended college in the past. Now, they are graduating at record rates.”

The program is called LIFT (Learning, Income and Family Transformation). LIFT expands staff support in offices critical to student success, deploys predictive analytics to keep students on track, supports emergency grants to help students cover life’s necessities, funds a peer mentoring program to allow students who have succeeded help others and supports financial literacy programming for students and their families. State Farm employees have volunteered their time and expertise to these programs and will support students through professional development and networking opportunities.

During a May 6 ceremony for the scholars and their family and friends on the Decatur Campus, the scholars received bright red State Farm stoles to drape over their graduation gowns. They also were recognized for their accomplishments during the past two years by Eric Cuevas, Georgia State’s director of student success; Des Potier, director of Georgia State’s Learning, Income and Family Transformation program, and State Farm executives Mark Robinson, DeWayne Griffin and Tammy Higa-Seaver. 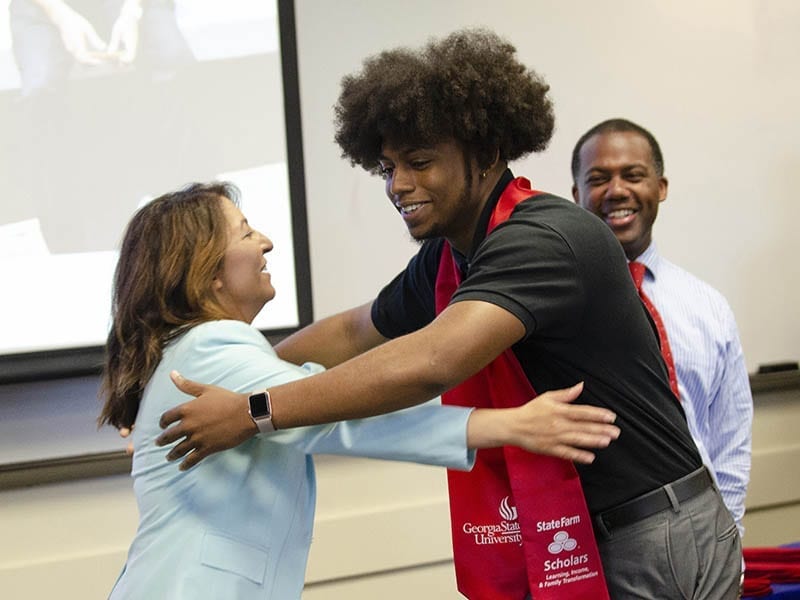 State Farm Scholar James Denson hugs Tammy Higa-Seaver of State Farm during a special ceremony Monday. The students celebrated in the ceremony, where they received stoles to wear at Commencement.

The ceremony was a poignant reminder for Keyanna Johnson of how fast the time has passed. Johnson began her educational journey at Perimeter College with a gleeful phone call. “You’re speaking to a future Georgia State Panther,” she told her mother. “I got the scholarship, mommy!” during the Southwest DeKalb High School surprise scholarship ceremony in April 2017.

While at Perimeter College, Johnson received an internship with The Drake House for homeless women and children and became involved with the Nonprofit Leadership Alliance (NLA) on Georgia State’s Atlanta Campus. Working at The Drake House and with others at the NLA inspired her to change her career path from history to political science and public policy, she said.

“I realized that I really wanted to focus on a career that would benefit my community,” she said. “Before the State Farm scholarship, I knew I wanted to go to college, but wasn’t sure about spending the money to come. Because of my great experience, now I want to start a nonprofit mentoring program for girls.”

Johnson will continue her studies in political science and her involvement with the NLA on the Atlanta Campus this fall. This summer, she takes on another internship with 100 Black Men of Atlanta, where she’ll help plan its fall conference programming.

“This group of scholars are pioneers,” Potier said. “They took a chance on themselves and the State Farm Mentoring Scholarship and are now in position to not only obtain a post-secondary credential but to do so debt-free. They are future film makers, teachers, lawyers, doctors, psychologists, social workers, researchers and community activists — and now they are Georgia State University Perimeter College graduates.”