Samuel Ferreira, a baritone, took a masterclass three years ago at Universidade Federal of Minas Gerais (UFMG) in Brazil. Taught by Kathryn Hartgrove, an associate professor of voice in Georgia State’s School of Music, the class intrigued him. He quickly decided to trade the tropics for downtown Atlanta, 4,500 miles away, to pursue a master’s degree under Hargrove’s tutelage. Now, he’s knee-deep in his studies, but the road to this point, which came with personal sacrifices and self-discovery, wasn’t easy.

Ferreira started studying music when he was 12 and living in Sete Lagoas, a city in the Brazilian state of Minas Gerais. He pursued a bachelor’s degree at UFMG, initially in piano performance, but a faculty member challenged him. 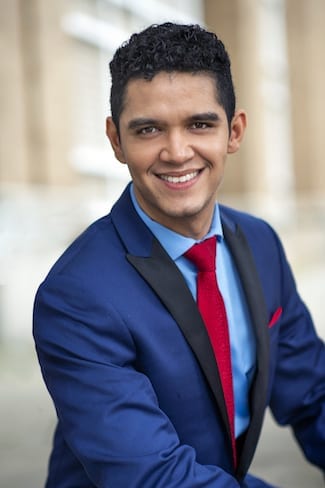 “Are you sure about this?” she asked. “I think you have a voice in there.”

Laser-focused and eager to study with Hartgrove, Ferreira was determined to get to Georgia State. To raise money for English lessons and the TOEFL (Test of English as a Foreign Language) exam fee, he performed in two fundraiser recitals. Things were scary, and money was tight, but Ferreira worked hard and accepted help from old friends in Brazil and new friends in Atlanta to make things work. He’s especially grateful for his family’s unwavering support.

Along the way, he learned the value of grit and determination.

“When you really want something, it will happen,” he said. “Just do what you need to do, and you will live one miracle each day.”

That’s the mantra that kept him going in his darkest hour, when his mother lost her battle with cancer. Ferreira hadn’t been able to travel back home to Brazil to see her one last time, but he pressed on.

“I keep her in my heart and mind, and in everything I do in my life, and I am sure she’s looking down on me,” he said.

Most recently, Ferreira performed in Germany and Austria as part of a summer project at the Internationale Chorakademie Lübeck. He also made his European debut as a soloist in a Mozart Scenes Program.