Before she became a star student-athlete, Madelyn Ott was nervous about transitioning from her small hometown in rural Virginia to the city life in Atlanta at Georgia State.

“I’m from the country, where you can’t see your neighbors’ homes because everything is so spread out,” Ott said. “I thought I would feel lost in Atlanta, but I feel like I’m surrounded by family here.”

Ott is majoring in social work in the Andrew Young School of Policy Studies and an Honors College student. The 6-foot-2-inch junior is also the middle blocker on Georgia State’s volleyball team, a spot that requires strength, skill, speed and height. 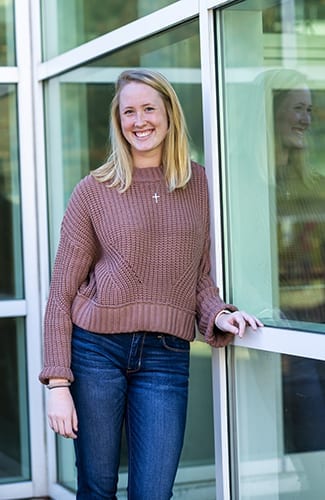 Ott’s interest in social work started during childhood. Growing up, she enjoyed hearing her grandmother tell stories about the people she met, helped out and got to know through her career as a social worker.

Later, when Ott was in the eighth grade, another childhood experience led her to focus on mental illness and substance abuse.

“Someone very close to me was experiencing mental health challenges and began engaging in self-harm,” she said.

Ott sought help for her friend through a school counselor, but the outcome left her discouraged and disappointed. The experience inspired her to put herself in a position where she could take action and effectively help others herself.

Like all student-athletes, Ott is always juggling her classwork alongside a rigorous game and training schedule.

“It’s made me extremely disciplined,” Ott said. “During volleyball season, I wake up at 4:45 a.m. every morning to get to practice at 6. I then run off to class after training.”

She also credits her time on the courts with sharpening her leadership skills.

“I work with 17 girls on the team,” she said. “That experience makes it easier for me to lead and direct the flow of things. These skills come through when I’m working on group projects, where it’s sometimes hard to get everyone to do his or her part.”

Ott made the president’s list in 2017 and 2018 and attributes much of her success to head coach Sally Polhamus.

“She reminds us often that being a student comes before being an athlete,” Ott said.

Now settled into her roles as a student, athlete and Atlanta resident, Ott said her early worries about not feeling at home in Atlanta are long gone.

“Playing volleyball has introduced me to my best friends,” she said. “I can’t wait to get on the court with the girls.”

As she continues her journey, Ott says she’ll abide by the lessons she has learned on and off the court at Georgia State: discipline, leadership and patience.