Director of Communications
College of Law

The Lawyer on the O-Line

Gabe Mobley, a four-year starter for the football team, is in his second year of law school.

Many people have an archetype in mind when it comes to a college football player, and it’s not Gabe Mobley (B.S. ’17, J.D. ’21). A starter on the offensive line for the fourth straight season, Mobley earned a bachelor’s degree in History in just three years and is in his second year in the College of Law. He may be the only Division I football player in the country in law school. 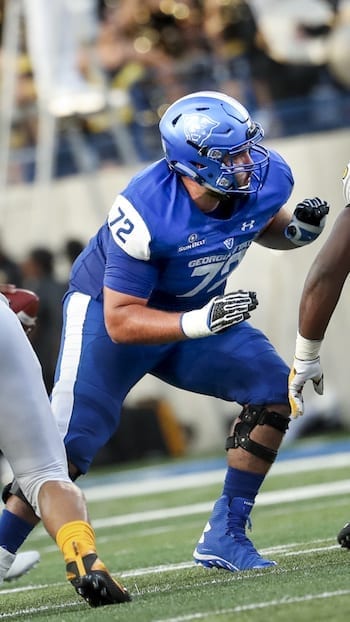 Mobley is not sure yet what area of law he will pursue, but he is sure the competitiveness of football is partly what drew him toward a legal career.

“I like the thought process of law, the mental battle, and there is definitely a correlation for me between football and law,” Mobley said.

Mobley grew up in Moultrie in south Georgia. His father, Bubba, is an electrical engineer and encouraged Gabe’s foundation in math. Cathy, his mother, tagged inanimate objects around the house and asked him to spell them and sound them out, which led to Gabe being an early reader. He earned 24 college credits while still in high school.

His brothers, Mike, who is nine years his senior, and Jake, who is 12 years older, taught Gabe the value of athletics and resolve. Gabe was at his brothers’ high school football or baseball games before he could walk or talk. As a youngster, Gabe was often on the bottom of his brothers’ playful rough pileups and there was no whimpering allowed.

“It was as if I had four parents,” Mobley said.

At 285 pounds, Mobley is light for a Division I offensive lineman. But in the scrum of the offensive line, the win goes to the player with low pads, fast hands and the one who understands the precise angles. Defensive linemen have been staring down at Mobley and trying to bully him for three years. He stays on his feet and has played every snap for 35 straight games coming into the 2018 season.

Cedric Williams, the offensive line coach, thought one of the younger backups might be a threat to move Mobley out of the starting lineup before the 2018 season. Mobley beat back the challenge.

“The guy behind Gabe is more physically gifted, but when you turn on the film, the guy making his block is Gabe, the guy playing with great effort down the field is Gabe,” Williams said. “It is at the point where I have to find things wrong with him. Gabe is just one productive human being.”