Keep Pivoting
Kevin Vettickatt (B.S. ’22), an Honors College student and Presidential Scholar, refuses to let setbacks keep him down and has his sights set on an emerging industry.

When Kevin Vettickatt zeroes in on a goal, he has the grit and aptitude to achieve it — even when he encounters great adversity. The actuarial science major knows how to put in the work and make it happen. 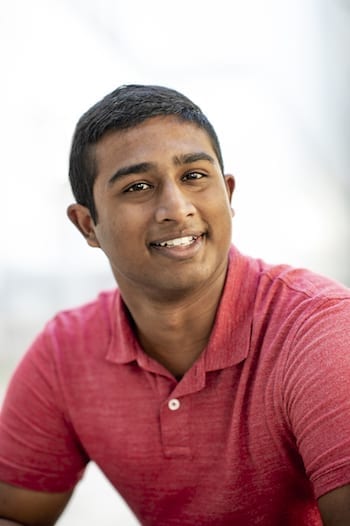 When his Marietta, Ga., high school offered no clubs that matched his interests, he started his own and found ways to fund them.

Vettickatt entered Wheeler High School focused on playing football. But in the third quarter of his first game, he dove into a ball carrier’s side and as the runner went down Vettickatt’s right knee popped out of place. He made the tackle, but his season was over.

After wearing a brace for months and enduring grueling physical therapy sessions twice every week, Vettickatt returned to the team for his sophomore season. Five games in, he dislocated his left knee. This time, the doctor convinced Vettickatt to hang up his cleats and focus on academics and extracurricular activities.

Math had always been Vettickatt’s main scholarly passion, but Wheeler High School had little to offer outside the classroom. So, he and some friends started the Actuarial Science Club, Engineering Club and Wheeler STEAM (Science, Technology, Engineering, Arts and Math) Leadership Group. And thanks to the sustainability plan Vettickatt implemented, the members of his clubs learned from experienced mentors in the field how to secure funding on their own so the cost of membership dues wouldn’t exclude anyone.

Like most college freshmen, Vettickatt isn’t entirely sure where his interests will carry him, but he’s got his eye on an emerging field that spans many of his interests.

“Self-driving cars are going to change the car insurance industry drastically, and I want to be involved in the development of the models and pricing that will shape it,” Vettickatt said. “Studying actuarial science and taking advantage of Georgia State’s Entrepreneurship and Innovation Institute will prepare me for meeting my goals of working in the industry and possibly one day owning my own business.”