Natsai Nadia Ndebele helps lead the way for young women of color in the tech world.

Natsai Nadia Ndebele has a mission. The computer science student wants to change the face of the science, technology, engineering and mathematics (STEM) fields by opening doors for other young women of color who, despite their interest in technology careers, can’t find a way in.

After moving to the U.S. from Zimbabwe, Ndebele became increasingly concerned with the underrepresentation of African-American women within the technology community. So, she made a commitment to fix that — starting with herself.

“If technology is building our futures, we all need to play a strong and active role in its development,” she said. “Everybody should have the opportunity to make an impact on the future.”

As a volunteer for the Atlanta chapter of the Black Girls Code, Ndebele is already making good on her commitment. Black Girls Code ­­works to bring more women of color into the STEM fields and empower them to become innovators. 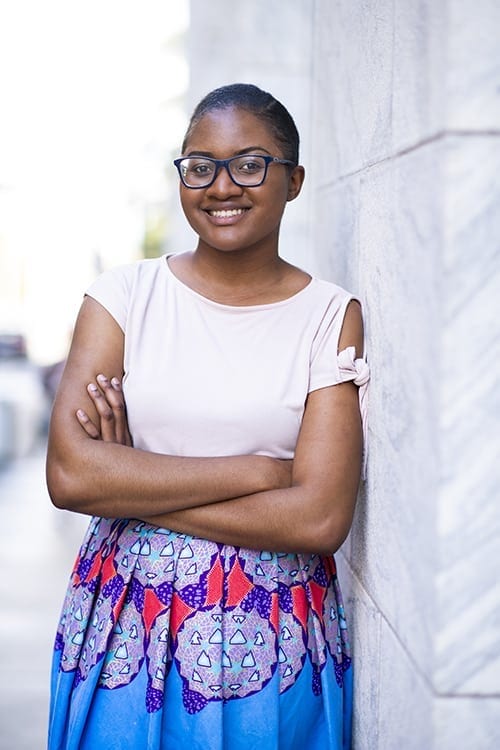 “Black Girls Code is about exposing young girls of color to computer science and technology at a very young age,” she said. “Then they can start seeing themselves in those fields.”

Even though she had prepared a stellar application and earned a good grade point average, she admits she was still scared to apply. But after recalling the lessons she learned at Georgia State’s WomenLead program at the Robinson College of Business, Ndebele took a leap of faith, elevating her ambitions above her fears.

“At WomenLead, they talked about men applying for jobs even if they didn’t meet all of the qualifications,” Ndebele said, “and that was the semester I decided to just go for it.”

Ndebele cites her grandmother, who died when she was very young, as an enduring source of strength and motivation. And she says that her mother, a teacher by profession, has been and will always be the guiding force in her life.

“One thing my mother told me that still sticks with me to this day is that, without dreams, we have nothing,” she said. “If you’re not going to dream big in life, then what’s the point of living?”

Ndebele’s dreams, combined with her dedication to service and giving back, drive another big part of her mission: her YouTube channel. There, she documents the challenges of pursuing a career in computer science as an African-American woman and reaches out to others like her. She says she wants to encourage young girls of color to overcome obstacles and struggles as they navigate their way through the technology world.

“I want them to take away that they can do it — but also that not every single person will be your cheerleader,” she said. “Nothing good has ever come without working hard, so be prepared to put in the work, and don’t be afraid to speak up. Don’t be afraid to talk about the things you go through. Other people have gone through it, too.”

The next chapter in Ndebele’s journey will take her to BlackRock, a global investment management corporation based in New York City, where she will work as an intern in a mentoring program that pairs students with entrepreneurs. While she does not know precisely where the internship will lead her, her dreams have only grown larger.

“My biggest goal is to bring STEM education back to Africa,” she said.

Reflecting on her time at Georgia State, Ndebele says she has sought opportunity at every turn — taking advantage of the open doors, kicking down others and leading the way for other young women to follow her.

“I’m really happy I came here,” she said. “I’ve grown a lot here, more than I could have ever expected.”