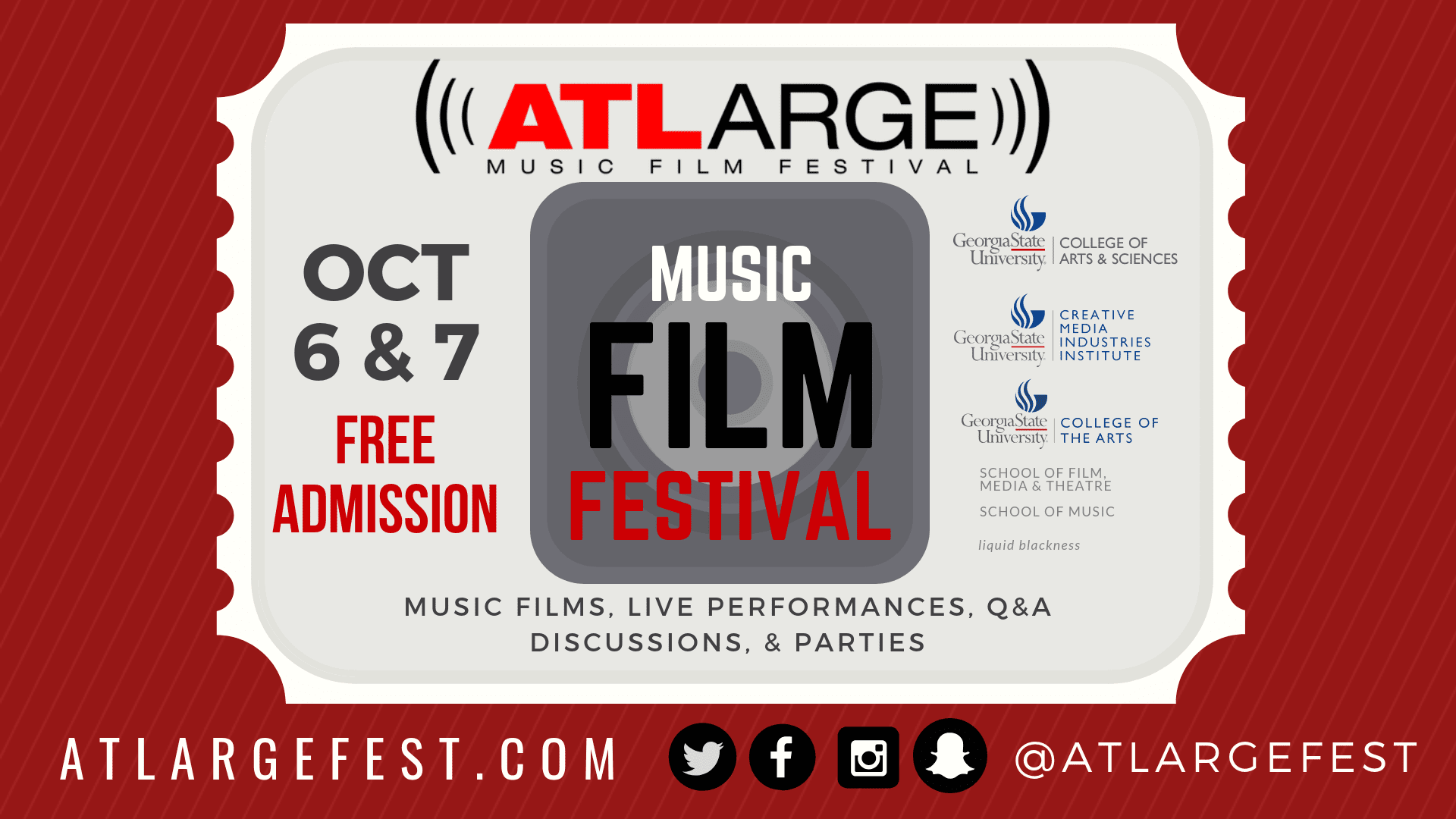 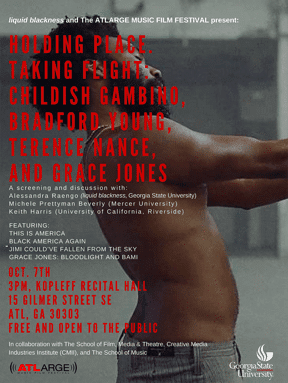 ATLANTA—liquid blackness, a Georgia State University research project on blackness and aesthetics, and the ATLARGE Music Film Festival present a public screening and roundtable discussion dedicated to some of the most thought-provoking visual and sonic artists working today:

FREE AND OPEN TO THE PUBLIC

“Holding Place, Taking Flight: Childish Gambino, Bradford Young, Terence Nance, and Grace Jones” seeks to provide a space for a conversation about the world-making powers of black art in the context of racial violence in America. The screening brings together signature works by, or about, some of the most thought-provoking visual and sonic artists working today: the award-winning musician, writer and actor Donald Glover/Childish Gambino, the creator of the FX series Atlanta; Oscar-nominated cinematographer, director and installation artist Bradford Young; experimental filmmaker and creator of HBO’s Random Acts of Flyness ,Terence Nance; and the legendary Grace Jones.

Donald Glover, showrunner, writer and actor in the FX series Atlanta and frequent collaborator with Director Hiro Murai, delivers a sense of unpredictability through jarring juxtapositions, abrupt shifts and absurdities. These constructs upend the viewer’s ability to clearly comprehend, and therefore dismiss, black affect and intention..

With Random Acts of Flyness, Terence Nance brings to the small screen the Afrosurrealist sensibility he debuted in An Oversimplification of her Beauty (2012), a dream-like celebration of multiplicity and free-wheeling creativity through an unrestricted mingling of diverse genres. Jimi Could’ve Fallen From the Sky uses a similarly unrestrained meditation on Jimi Hendrix’s skydiving skills to tell a story about the origin of his unique sound and playing technique.

Black America Again, directed by Bradford Young, was made to accompany the release of Chicago rapper Common’s 11th studio album. The lyrical short film, shot in Baltimore along the route of Freddie Gray’s “rough ride,” is grounded in the local community and celebrates its beauty, resilience and rituals of memory and mourning. Looking at a past influenced by diaspora and at a future yet to be written, the film pivots around the ambiguous sense of the “again” of its title. A shift from the denunciation of ongoing systemic oppression into the voicing of a different desire echoes Stevie Wonder in the song’s bridge: “We are writing the new Black American story.”

Sophie Fiennes’s documentary Bloodlight and Bami begins in 2005 and follows Grace Jones through her personal life, her return to family in Jamaica, recording sessions, and recent international performances. The legendary artist’s boundary-breaking career infuses the film with a combination of rawness and excess, disarming honesty and careful artifice, conveying the enduring power of a popular-culture icon that never agrees to be defined by others.

Liquid blackness is a research project on blackness and aesthetics that curates critical encounters around arts of the black diaspora, online research tools and resources, and a scholarly journal. It is coordinated by Dr. Alessandra Raengo with graduate students and alumni from the Moving Image Studies Doctoral Program at Georgia State University. “Holding Place, Taking Flight” fits within liquid blackness’s continued research on experimentations with uncompromising black film aesthetics and the intersection between the ethics and politics of form.

ATLARGE Music Film Festival, the Creative Media Industries Institute (CMII), the School of Film, Media and Theatre, the School of Music, and the College of the Arts at Georgia State University