It has been an exhilarating summer for the School of Film, Media, & Theatre’s Professor Daniel Robin, who travelled to Portugal in July to present his new film short “All the Leaves Are Brown” at the prestigious Curtas Vila Do Conde – International Film Festival.

As one of the most important and top ten film festivals for short films in the world, Professor Robin (Film and Digital Media Production) was one of a few American filmmakers that was invited to the festival alongside a highly competitive field of internationally acclaimed filmmakers such as Laura Poitras (of Citizefour – the Edward Snowden documentary), Jia Zangke (multiple Cannes feature competition films), and Ben Rivers (the celebrated British experimental documentary filmmaker).

Professor Robin (2nd from the right) at a panel discussion with fellow filmmakers.

“Having my film selected to screen in the International Competition at Curtas Vila Do Conde has been one of the most gratifying experiences I’ve had as a filmmaker, on parallel, perhaps, with my experiences screening films at Sundance,” said Robin. “The quality of filmmaking at Curtas Vila Do Conde is rich with innovation and risk, and the conversation with filmmakers nourishing, leaving me with a profound sense of both melancholy and joy when the festival was over.”

“All the Leaves Are Brown” is an 11-minute autobiographical reflection on film, in which Robin turns to nostalgia for the past and for his life in California (as in the music of The Mamas & The Papas that the title suggests) in imprinted on the beautiful landscapes shot in Super8 (More info here). 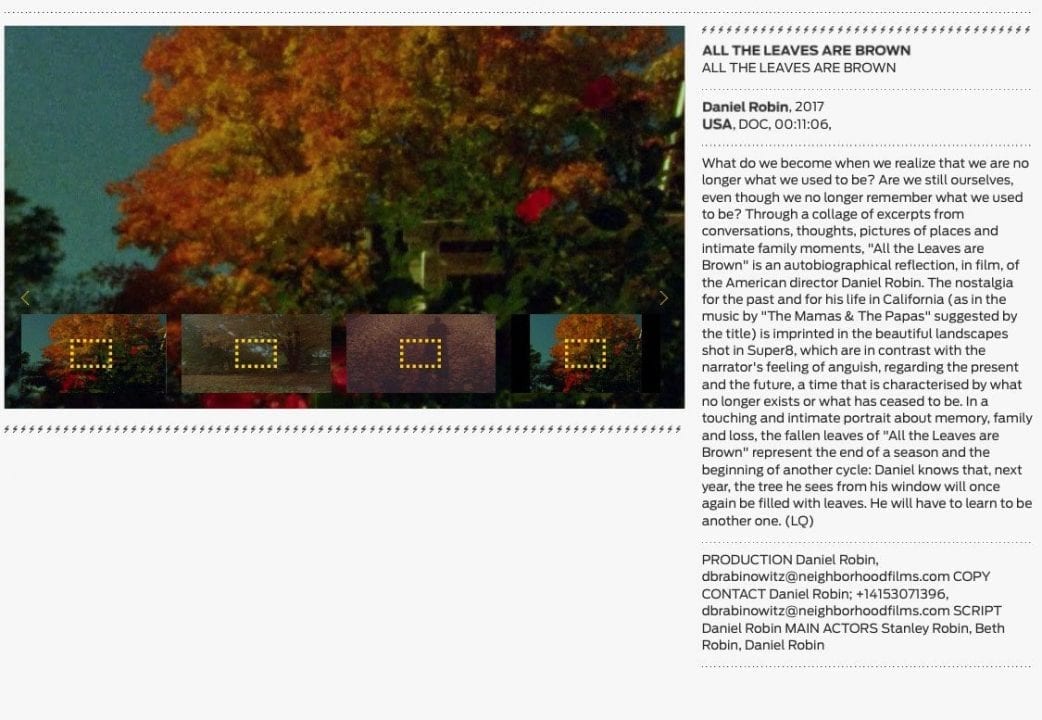 Tapping into the talents and resources of College of the Arts, Professor Robin collaborated with School of Music’s Professor Gordon Vernick, who played trumpet for the film’s closing credits.

What’s next? Look for the “All the Leaves Are Brown” at the 19th annual Sidewalk Film Festival in Birmingham in August.

Congrats to Professor Robin for this prestigious and important honor!