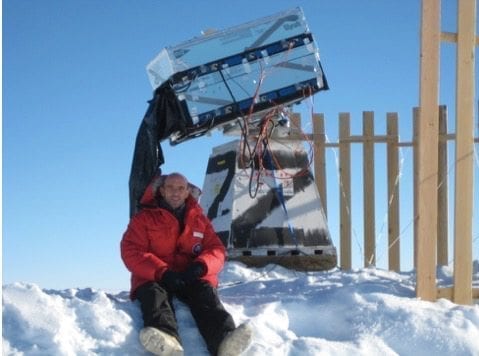 ATLANTA—Dr. Stuart Jefferies, professor in the Department of Physics and Astronomy at Georgia State University, will lead a multi-institutional team in opening the South Pole Solar Observatory in Antarctica and installing and operating instruments that will record high-resolution images of the Sun.

The project, sponsored by the National Science Foundation’s Division of Polar Programs, will begin in December.

The South Pole Solar Observatory will be 4 kilometers away from the United States Amundsen-Scott South Pole Station in Antarctica. The two instruments being installed will log high-resolution images of the Sun every five seconds at two different heights in its atmosphere.

The data will also have applications in several other areas of interest in solar physics, including studying the triggers of space weather events (solar flares and coronal mass ejections) that have direct societal impact, mapping of the Sun’s sub-surface structure and dynamics, and investigating the solar coronal heating enigma, a long-standing puzzle of why the temperature of the Sun’s atmosphere rises from about 6,000 degrees at its visible surface (the photosphere) to a few million degrees in its outer atmosphere (the corona).