Athlete, leader, caregiver, researcher, and healer, these are just some of the titles that the Class of 2016 claims. Overall, they represent the more than 350 undergraduate and graduate that the Lewis School is launching into the healthcare world. 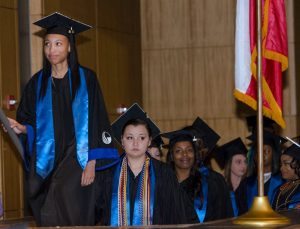 Brand-new nursing graduates Ebony Johnson and Katelyn Guzman personify determination and hard work in the face of adversity. Johnson had to make her way in a new city, working nights while enrolled in the challenging ACE undergraduate nursing program. Guzman immigrated to the United States as a child and was sought by two other Atlanta colleges before the Goizueta Foundation Scholars Fund solidified her decision to attend Georgia State. After enrolling in the nursing program, she became both a translator and caregiver to her seriously ill mother.

Nutrition bachelor’s graduates Greg LaFortune and Diana Parker use their leadership skills to share their passions for healthy foods. LaFortune and Parker both served as 1913 Society student ambassadors for university President Mark Becker’s office. LaFortune, who has had diabetes since childhood, uses public speaking and social media opportunities to share his knowledge of nutrition. Parker is a manager of the nutrition student-run Panther Pantry, a food pantry for students in need.

Former Olympic cycling hopeful Nick Housley traded his medical school plans for a doctor of physical therapy degree. Following his August graduation, he will enroll in yet another doctoral program, a Ph.D. in applied physiology program at Georgia Tech. Read how a major cycling accident changed the course of Housley’s career.

Student athlete and undergraduate respiratory therapy student Deidra Bohannon shares healthcare experience with Stephanie West, an integrated respiratory therapy graduate student. West pursued a back-to-back integrated bachelor’s and master’s degrees while undergoing the hemodialysis for chronic kidney disease. She chose a career in healthcare at an early age and credited her illness for giving her a special empathy for her patients and their families. Like West, Bohannon also chose health care early on when she helped care for her chronically ill mother. 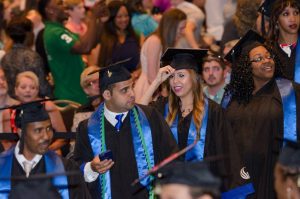 A student-athlete, Bohannon, who is a star court volleyball player, had to learn to balance her busy schedule of practice, games, lab simulation, studying and clinical rotations. Bohannon praises the coaches and faculty at Georgia State for giving her the tools to succeed.

The Lewis School is proud to launch these seven graduating students and their classmates into their respective healthcare careers and know that they will bring their individual talents to enhance individual and community health in a culturally diverse society.