he U.S. Fish and Wildlife Service and the U.S. Geological Survey last month delivered a sobering update on the white-nose syndrome (WNS) epidemic in North America. WNS has been confirmed in a little brown bat (Myotis lucifugus) near North Bend, Washington, over 1,300 miles west of the previously identified western edge of the disease front, Nebraska.

The news hit the WNS and bat conservation community hard. For the previous 10 years, WNS has spread in a stepwise manner from state to state in a radial pattern from Albany, New York, which is thought to be where the infections started. The consistency of this spread allowed researchers to model the movement of the pathogen, Pseudogymnoascus destructans, with an anticipated arrival on the Pacific Coast in 2026.

Researchers have been developing strategies to control WNS and prevent the massive bat mortalities that have been the hallmark of WNS since 2007. And yet, the disease has spread faster than predicted. Where does this new point of infection leave researchers developing techniques to stall this devastating disease?

Gateway to the west

In order to understand why this is such bad news for bats, one needs to understand how wildlife biologists seek to control the spread of devastating pathogens.

Many of the strategies currently being investigated to minimize the impact of WNS on susceptible bat populations are predicated on the idea that “stop-gap” methods could be employed at geographical choke points to delay the spread of the disease to new populations. That would buy time for scientists to develop permanent solutions, such as vaccinations or “gene silencing” techniques to control the disease.

The arrival of WNS on the West Coast takes this approach off the table in many respects, as it’s already past the geographical bottleneck spots where scientists had hoped to slow it down. But the WNS community has other reasons for concern with this new case.

Studies of the fungus from the eastern U.S. have shown the pathogen to be mono-clonal. That is, P. destructans in Georgia is the same genetically as P. destructans in Missouri or New York. This is a good thing for bats because it gives them a better chance to develop resistance.

Subsequent evaluation indicates that P. destructans, like most fungi, is likely capable of participating in sexual reproduction in areas where complementary mating types (think male and female, but with numerous potentially compatible “genders”) exist together. When this is considered along with the recent finding that P. destructans and WNS are widespread in eastern Asia, it presents the possibility that this West Coast case may have been introduced a new way or it represents a different strain of the fungus. Significantly, it could be a complementary mating type to P. destructans in the eastern U.S.

This could be a very bad thing for bats for several reasons. To understand how bad this infection could be to the future of WNS in North America, researchers will need to determine its source and any sexual compatibility with existing isolates.

Tougher than your average spore 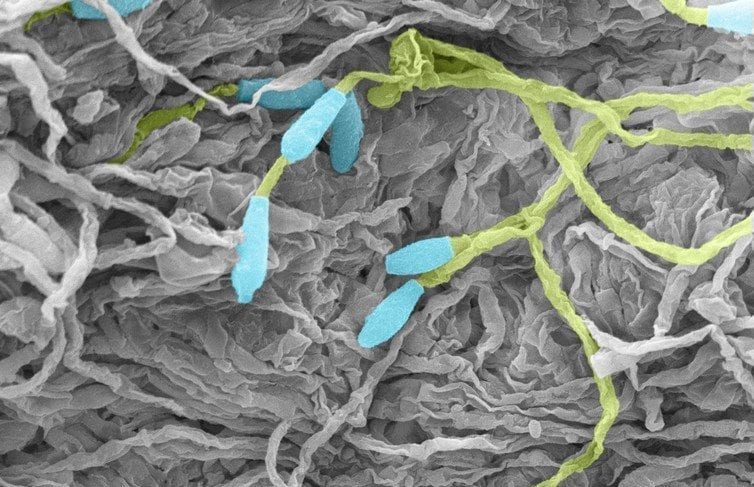 The spores (reproductive cells produced by fungi) that are produced in asexual reproduction are known as conidia. All the current work being conducted to make spores inactive to control the spread of WNS are predicated on the sensitivity of these conidia to a given control agent.

Yet the phylum of this fungus, known as Ascomycota, can reproduce in another way – sexually, through a type of spore known as ascospores. In numerous examples in other Ascomycota, it has been shown that ascospores are more resistant to control methods than conidia.

If researchers find that the particular P. destructans fungus is capable of producing ascospores – that is reproducing sexually, rather than asexually as with conidia – then current decontamination protocols will need to be revised to address the increased resilience of these sexual spores.

A Red Queen and brown bats

The ultimate significance of whether the fungus reproduces sexually involves a long-debated theory of evolutionary biology that many have been hopeful will ultimately save susceptible North American bat species: the Red Queen hypothesis.

The idea is that in a system with a host (bat) and parasite (P. destructans), coevolution occurs as the disease recurs through numerous generations. If only the host is reproducing sexually (i.e., WNS in North America) and generating greater variation with each generation, the host will be able to evolve a tolerance to the parasite.

However, in a system where both the host and parasite reproduce sexually, coevolution supports the status quo. So as bats evolve tolerance to one strain of P. destructans another strain resulting from sexual recombination that is capable of causing disease in the new tolerant host will become the dominant strain.

A mysterious fungal disease is wiping out North American bats at breakneck speed. Can we save them?

Thus, the analogy of the Red Queen running in place in “Through the Looking-Glass, and What Alice Found There” by Lewis Carroll. Although evolution is occurring (running), everyone is evolving together so the disease paradigm never changes.

This is the possibility the introduction of a complementary mating type presents to WNS in North America. Bats won’t be able to evolve a significant tolerance as the fungus reproduces sexually and rapidly adapts to any resistance the bats develop.

Bats everywhere but not a hibernacula to treat

In addition to the strategic and biological challenges that a Pacific Coast WNS case may introduce, there is also a major logistical challenge that has been looming over the WNS community: where are hibernacula – the shelters where bats hibernate – in the west?

Treating bats during the spring, summer and fall when they are widely dispersed on the landscape is impractical. The effort it takes to capture a few individuals is not scalable to an extent that could have a significant impact on WNS-related population declines. That is why most efforts to develop management strategies have been focused on intervention during the winter at known hibernacula where large groups of bats could be treated together with reasonable effort.

If any of the treatments currently under investigation were available today, how could they be used in Washington? Without understanding how these western bat species use the landscape and where they hibernate, there is no way to deliver any future management tool.

In many ways this new western case changes the paradigm of WNS.

In the worst-case scenario, a complementary strain has been introduced into North America and will eventually find its way to locations where the East Coast strain exists, facilitating a more recalcitrant and adaptable pathogen.

In the best-case scenario, this case represents a loss of containment within North America, reducing the value of efforts to slow the westward spread of WNS while treatments can be developed and western bat hibernacula can be identified. Either way, the news of a WNS-positive bat in Washington state represents another disaster for bats that are already experiencing unprecedented declines.

This article was originally published on The Conversation. Read the original article.