Trey Cason took his first career-related job at Atlanta Mission in August of 2011. Freshly armed with knowledge from his bachelor’s degree in social work, Cason felt ready to join the workforce and end homelessness, but things did not go as he planned.

“A few weeks into the job, one of the men came to me and said, ‘You think you know me because you read a book about me? Please, enlighten me about my life,’” Cason says.

Cason was stunned. He decided to move into the shelter.

“We want things to change, but we don’t want to change. We live in our safe suburbs, then come into the cities and do our community projects and leave. We transfer goods, but the broken relationships that lead to poverty and homelessness haven’t been solved. That’s why I decided to move in,” he says.

He also made some changes to his own appearance. He got rid of the desk in his office, ditched his ties and button-down shirts and grew a beard in order to appear more approachable and welcoming toward the men in the shelter.

Cason spent the next six months living in The Shepherd’s Inn, 450-person capacity shelter that provides emergency shelter, temporary shelter programs and residential recovery. He also spent a great deal of time in Fuqua Hall, a separate, smaller traditional housing shelter. He ate meals, took showers and slept in the bunks alongside men who turned to the mission for shelter and support.

At Shepherd’s Inn, Cason ran the chapel, taught classes in finance and money management and worked with the job retention program. During this period, Cason admits he was dealing with painful things in his life, but he found healing at the shelter.

“It was truly one of the most cathartic experiences of my life. I was hurting, they were hurting. I didn’t like them a lot of the days, and on a lot of days they didn’t like me. I felt like I wasn’t supposed to be there, but we were able to find bridges to connect with each other,” Cason says.

Learning names and nicknames, understanding culture, and sharing a mutual love of Atlanta’s own OutKast allowed Cason to start to building relationships with the men.

Late at the mission one night, Cason heard a man in his early twenties screaming and threatening others. There is no tolerance of violence or threats, and the mission strongly enforces those rules. Although he could have kicked the young man out of the shelter for violating the rule, something inside Cason told him not to do it.

“I brought him in my office, and after we waded through all of the tough talk, I found out he thought someone had stolen his favorite jacket,” he says.

After spending more time talking with the young man, Cason realized the jacket was the one connection he still had with his sister. It was the only thing she had ever given him, and he did not know where she was. His parents had abandoned the family a decade earlier, at which point he felt he had to make money for his brothers and sisters to survive. He told Cason that at 12 years old, he started selling drugs on the street.

They discovered the missing jacket was simply in the laundry, and Cason began to work with the young man to help him find a job. He helped him get a suit, edited his resume and drove him to interviews. But with his criminal record, no one was willing to give him a chance. After countless rejections, the young man started to give up hope.

“He told me he knew he could walk down the street today, start selling cocaine and make $1,000 dollars a day. But he wanted to do the right thing. He wanted to get a job that pays seven dollars per hour – to ‘go straight’ – and he was willing to give up the opportunity to be a boss on the streets. But no one gave him that opportunity,” says Cason.

“What happened to him when he was a kid was not his fault. He made some bad decisions, yes, but would I have done things differently if I were him? I don’t know.”

“After living there, you can never be the same,” he says. “There are personal and systemic things that lead to stories like his, and we heard them over and over in the shelter. He made bad decisions, but did we make the path to success easier or harder for him?”

Through this experience, Cason says he realized homelessness is where the collective brokenness of society comes together.

“When there is brokenness in society, which is endemic, poverty thus follows,” he says. This brokenness can be in the form of relationships with family and friends, society, government, urban planning and belief systems. 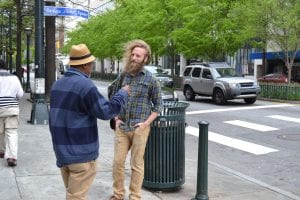 When he graduates with his M.S.W., Cason hopes to intervene at the community and policy level by advocating for mixed-income housing and community development.

“It’s going to take all of our efforts to solve homelessness, not just giving our leftovers. You have to ask yourself, ‘Am I okay with poverty?’”

Cason says ending homelessness should be a collaborative effort from each individual in the community.

“We have to believe that everyone on earth, no matter how long they’ve been homeless, has value and worth. They are people, and if all I do is treat them as a project – something to be managed – I’ll miss out on who they are and the great things they have to offer.”

After this experience, Cason earned a Master of Divinity from the New Orleans Baptist Theological Seminary. He spent two years doing mission work overseas in economic development and sustainable agriculture before he decided to pursue his masters at Georgia State University. With his B.S.W. and his work overseas, Cason was able to pursue the advanced standing M.S.W., which allows students to earn the degree in one year.

Cason will graduate in May. He says he plans to continue to fight to end homelessness and work in the fields of community development and human rights. 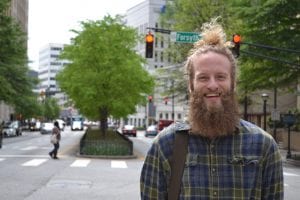 “The men in the shelter changed me. They made me better, and that doesn’t come from volunteering a few hours on the weekend. We ate every meal together, and I got to know them as people, not ‘the homeless,’” Cason says. “It was beautiful.”