The Lewis School co-sponsored, in conjunction with the College of Arts & Sciences, a successful BrainModes 2015 course and workshop in December. This international conference, held for the first time in the U.S., brought together experts from various disciplines and sought to explore innovative means of understanding complex brain activity and multimodal neuroscience data sets. Georgia State hosted more than 100 participants and speakers to the workshop and more than 20 at the two-day pre-event course, which included hands-on demonstrations of brain recording, stimulation and simulation technology.

Since the first BrainModes held in Berlin in 2007, it has been focused on exploring innovative means of understanding complex brain activity and multimodal neuroscience data sets.

In December of 2015, world experts from the three distinct fields of neuroimaging, cognitive neuroscience, and computational neuroscience came together for discussions of cutting-edge methodological and technological innovations in brain sciences on Georgia State Campus. 17 invited lectures and 20 contributed poster presentations shared recent neuroscientific discoveries and spurred new discussions and collaborations.

Lively discussions on novel findings, methods on brain data analysis and modeling on the topics of brain processes highlighted the course and workshop. 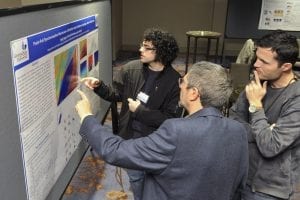 “… [BrainModes] fostered delightful informal discussion among a diverse group of people from many fields including mathematics, physics, neurology, cognitive neuroscience, computational neuroscience, and more,” said Andrew Butler, BrainModes co-organizer and associate dean of research for the Lewis School. “Through these discussions, we’ve not only learned more about oscillatory and large scale networks but formed new collaborations, new friends and new social networks that span the globe.”

Stimulation (TMS). Magnetic stimulation is a non-invasive, pain-free technique used to excite and depolarize neurons in the brain and peripheral nervous system using induced currents. When stimulating the brain rTMS can produce lasting effects on cerebral functions, such as improvement of mood in depression.

Brain Vision LLC, a North Carolina-based company partnered with Brain Products for electroencephalography (EEG) technology, taught the basics of brain electrical activity recordings and demonstrated their latest EEG products with hands-on experience for the participants. EEG is an electrophysiological monitoring method to record the electrical activity of the brain in a noninvasive manner. EEG measures voltage fluctuations resulting from synchronized ionic current flow within the brain neurons and networks, which allows this technology to apply to the understanding of both brain functions and dysfunctions. 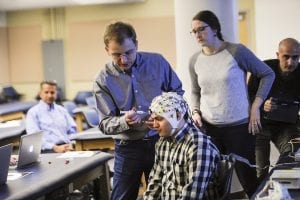 “There are many pressing and challenging research problems in basic and clinical neuroscience. More than before, in the context of remarkable technological developments in the current time, research progress in these fields depends on collaborative efforts from many disciplines. BrainModes 2015 brought together many outstanding experimental, computational and theoretical neuroscientists to discuss important topics such as brain oscillations and networks, critical for understanding brain functions and many brain disorders,” said Mukesh Dhamala, a co-organizer, and instructor of BrainModes 2015 course and workshop.

“For the first time, in the workshop, we also brought together our local colleagues who are working on research in cognitive, computational and mathematical neuroscience,” said Dhamala, who is also an associate professor of physics and neuroscience.