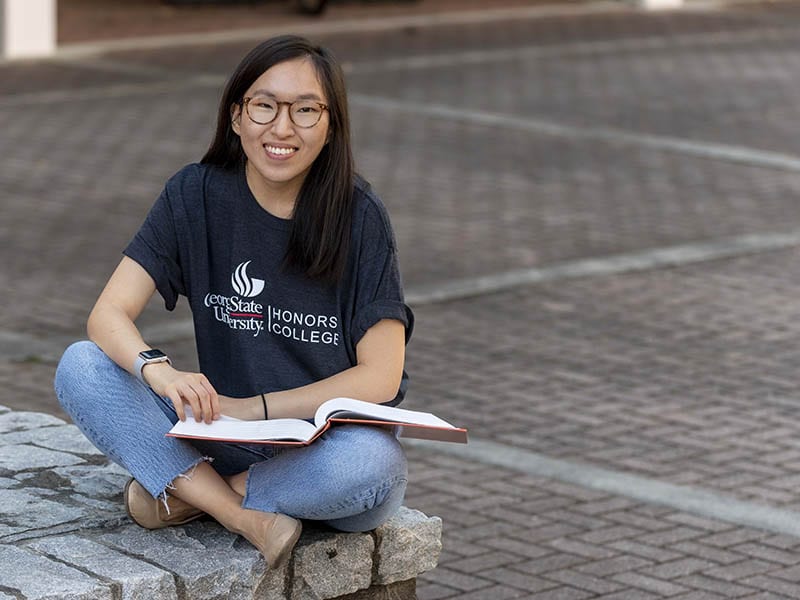 Loam Shin is feeling confident these days, and she likes it.

Born profoundly deaf in South Korea, 25-year-old Shin has fiercely confronted and overcome obstacles since immigrating to the United States at age 5. Now, she’s among a select group of semifinalists for the competitive Jack Kent Cooke (JKC) Undergraduate Transfer Scholarship, whose winners are selected based on factors such as leadership, service to others, academic ability and persistence. It is the largest private scholarship for two-year and community college transfer students in the country

“It means a lot to me that they were able to really recognize more about me, who I am, and not just see my challenges,” Shin said. “They were able to see my story, my history, my honesty, and I was just thrilled to be chosen for that.”

The youngest of three daughters, Shin moved with her mom and siblings from South Korea to the United States to join her father, who already had immigrated to America to work as a Korean translator.

Then, the unthinkable happened.

“After the family moved here, my father immediately left us,” Shin said. “He quit his job, and he left us without a penny, with nothing. My single mother took care of me and my sisters, making sure our needs were met and worrying about the bills constantly.”

Life was difficult, including complications that arose from the family not having proper immigration documents. Shin and her sisters received Deferred Action for Childhood Arrivals (DACA) status, which allowed them to attend school legally.

“As a student with DACA status, there were very few opportunities and many limitations,” she says. “With my deafness on top of it, it made my experience accessing information regarding scholarships, or anything in life, more difficult.”

But Shin’s mother set high standards for her daughters.

“She’s tough on me, and I really appreciate that,” Shin said.

“One of the best pieces of advice from my mom was ‘if you’re feeling kind of diminished or down because people are telling you that you can’t do it because you’re deaf, use that to prove that you can do it,’” she said.

By the time Shin enrolled at Perimeter College, her mother’s health had begun to deteriorate due to years of untreated diabetes. Because of the family’s immigration status, accessing health care was difficult. To help, Shin and her sisters worked while attending school. DACA enables the young women to work legally in the United States.

Shin and her older sister Bomm were featured in a 2015 Georgia Perimeter College article when both were attending the college as Honors College students and scholarship recipients.

Dr. Tina Stern, now retired, taught Shin and described her as “the kind of student faculty members love to have in class. She is engaged, fully present, interested, motivated, curious and open.”

Shin appreciates the support and encouragement of family and Perimeter professors. She followed the college’s psychology pathway and graduated in 2017 but couldn’t immediately pursue her bachelor’s degree because she had to work to save money and help her family. She now is a paraprofessional at the Atlanta Area School for the Deaf.

She remembered hearing about the Jack Kent Cooke scholarship, however, and decided to apply. She spent two months working on her application, writing and rewriting each answer until it captured the essence of her — not only as a deaf person, but as an immigrant to the United States living with DACA status. She wanted reviewers to understand that, despite the often unfortunate circumstances she has experienced, she has high ambition and capability.

“I hope this shows that people who face challenges in life, like me, can overcome them and do anything,” she said. “Being selected as a semifinalist really gave me hope.”

Shin wants to attend New York’s Rochester Institute of Technology or California State University, North Ridge, in Los Angeles, to study how to design products and websites that are accessible to everyone, including deaf individuals. It’s called human-centered computing, with a focus on user experience (UX) and user interface design (UI).

“As helping the marginalized, especially deaf people, has always been my passion, I became interested in improving and enhancing accessibility and usability,” Shin said. “With a degree in human-centered computing, I hope to become an UX/UI designer who makes an impact on people’s lives and creates the best possible experiences by addressing their needs through technology and design.”

The announcement of this year’s Jack Kent Cooke scholarship winners is expected in late April. Each recipient receives up to $40,000 per year for up to three years to complete their bachelor’s degree. Since 2002, the JKC Foundation has awarded 21 Perimeter students the scholarship.