By Michael Davis (B.A. ’03)
Use Scan QR Code to copy link and share it

Collaboration is ubiquitous in the music industry, with songwriters sharing credits, performers making guest appearances on other artists’ singles, and producers, arrangers and publishers getting slices of the proceeds when a song is streamed or downloaded.

It’s a complicated world for a novice, but Robert Hatcher (B.A. ’17, MBA ’20) and his startup Aurign (pronounced ȯr-ə-jən) are hoping to make it easier. Over the past year, as the company has prepared to hit the marketplace, it’s won a trio of big awards in prestigious business plan competitions.

With a platform to allow artists to collaborate in real time, even remotely, while at the same time recording each contributor’s part of the project and their publishing rights information, Aurign will offer a simple way to ensure musicians and producers are paid what they’re owed.

Hatcher, 30, of Atlanta, conceived the idea for the company while in an entrepreneurship class as an undergrad at Georgia State. An amateur musician and songwriter, his idea was to create a virtual music studio using blockchain technology — a kind of electronic ledger and the premise behind cryptocurrencies like Bitcoin — to track a song’s development from start to finish.

Because each step of the writing and production is put down on the ledger, each contributor can be assured their part of the song’s eventual royalties will be appropriately credited and paid.

“Publishing royalties are all based on contract management,” Hatcher said. “If you have multiple artists contributing and performing on a song, there needs to be a contract that specifies who the contributors are and what their percentages of the song’s royalties are.”

Creating those contracts can be a daunting process for artists and their representatives, especially when a number of artists (three to seven is not unusual) are involved in a song’s production. Hatcher said the pressures of release deadlines often complicate the process further, creating room for errors that can lead to lawsuits.

“I started my company as an undergrad, and I was a psychology major, so I wanted to develop my business acumen and be able to see the whole picture. The courses I’ve taken related to my business venture, so I was able to use that in what I wanted to do with my startup.” 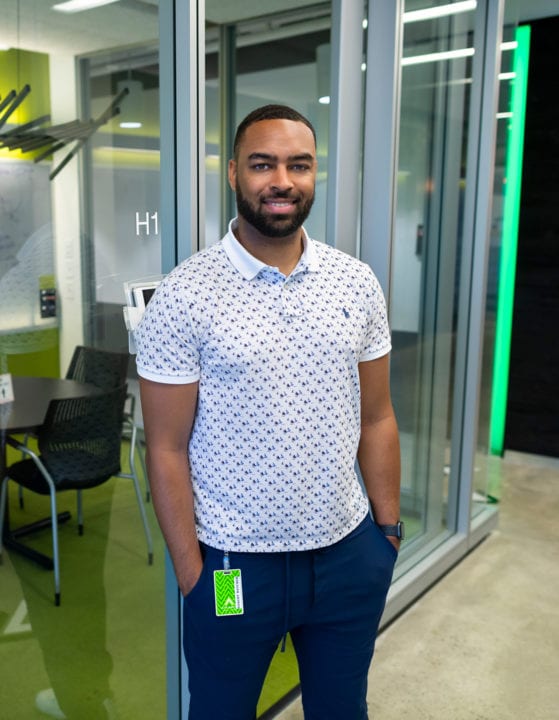 Robert Hatcher co-founded Aurign, a company that offers a simple way to ensure musicians and producers are paid what they’re owed.

Aurign’s model streamlines rights management and royalty distribution to help even independent artists make the most of their music. With Aurign serving as a publishing administrator, Hatcher said artists will be able to capture their royalties without having to sign with a publishing firm or create their own legal entity to accept payments from performance rights organizations like the American Society of Composers, Authors and Publishers, and the Harry Fox Agency.

“You either have to be signed to a publisher or create your own LLC and be a publishing firm in order to receive your royalties. But a lot of artists, especially younger artists, they’re just putting music out directly to Spotify,” Hatcher said. “Spotify may pay their royalty for the master, but Spotify doesn’t necessarily know who the rightful owner of the publishing is, so people don’t get paid for that. And there’s about $2.5 billion that’s gone unclaimed from publishing royalties alone.”

Aurign’s executives include co-founder and Chief Operating Officer Kevin Taylor, a hip-hop and R&B producer with more than 20 years’ experience in the music business. Hatcher said Taylor’s industry knowledge has been invaluable in creating Aurign’s tools.

Over the past year, the company has seen an infusion of cash from national entrepreneurship competitions, including the $350,000 grand prize from the 2020 Rice Business Plan Competition hosted by Rice University.

In March, the company came in second place in the Baylor University New Venture Competition, taking home $25,000. Last summer, Aurign won the Heartland Challenge at the University of Arkansas, a national pitch competition for undergraduate and graduate students, which came with a $50,000 prize.

Hatcher said the company will be beta-testing its platform this spring, with plans for a product release in the fourth quarter of this year. In the meantime, Aurign’s been enhancing its management team and refining its technology in order to scale it up to customers.

Hatcher said the lessons he learned studying at Georgia State have given him a firm foundation as an entrepreneur. After transferring from a community college in Alabama and earning a bachelor’s degree in psychology from Georgia State, he said he wanted to stay local for his MBA. Georgia State’s Flexible MBA program allowed him to get started the summer after finishing his bachelor’s degree.

“I started my company as an undergrad, and I was a psychology major, so I wanted to develop my business acumen and be able to see the whole picture,” he said. “The courses I’ve taken related to my business venture, so I was able to use that in what I wanted to do with my startup.”

After meeting at Georgia State, Lance (MBA ’03) and April (B.A. ’01) Ledbetter embarked on a lifelong journey together — as husband and wife and as co-founders of dust-to-digital, a Grammy award-winning record label mining music’s past to preserve it for future audiences.
By Henry Lake
Georgia State Alumni Association 40 Under 40 honoree and rocket scientist Kavya Manyapu has been tapped to work with NASA’s Artemis program.
By Rebecca Rakoczy