A beloved fixture of the Georgia State Child Development Program for four decades, Danny Darby helped shape its reputation, has taught countless students and teachers, and even welcomed the children of former students to its classrooms.

At over 6 feet tall, Danny Darby might appear to be an imposing presence, especially to preschool kids. But over a career spanning 40 years in the Georgia State Child Development Program, which operates two centers for children from birth to 5, Darby is known more for his uncanny ability to soothe crying babies, relate to inquisitive toddlers and stay focused on the most important part of the job — the children. 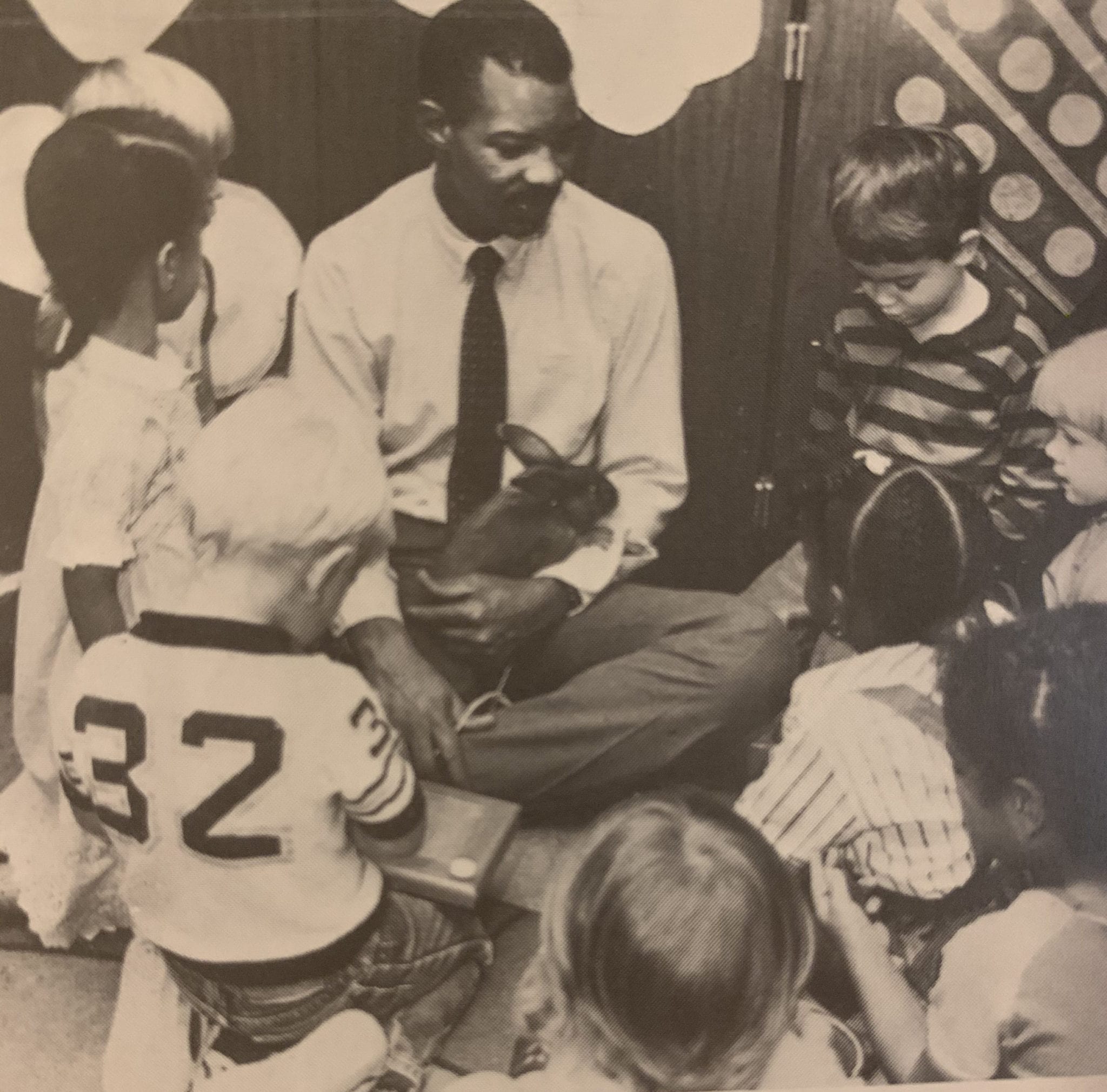 In this photo from 1985, Danny Darby and a furry friend are surrounded by children in Georgia State’s Child Development Center.

Darby is highly respected for his knowledge of the field, and he’s also revered for his unflappable calmness and a demeanor that allows him to quickly bond with children who soon see him as a role model and mentor. (Some children have even been known to take a wardrobe cue from Darby’s signature shirt-and-tie ensemble.)

Known to some simply as “Mr. Danny,” Darby retired from Georgia State at the end of May after starting his career in the Child Development Program in 1981, which was then housed at Atlanta’s Central Presbyterian Church. At the time, the center was being brought into the university’s Department of Early Childhood Education and converted into a program for the children of faculty, staff and students of Georgia State. For several years before that, it was an informal hourly care program run by students who took turns looking after each other’s children while parents attended classes. The program moved from the church to its current on-campus location in 1983.

Starting his career as the lead teacher in the 1-year-old classroom, Darby has taught all ages at the center. He’s also built a reputation around the state as a teacher of teachers, presenting at conferences and hosting training sessions for thousands of early childhood education professionals. In 1999 he became the curriculum coordinator for the Child Development Program, and though it’s not a classroom role, he remained a fixture in children’s days, often visiting classrooms to read to children and help out with learning activities.

“When I first started, it was extremely unusual for a male to work with children that age,” Darby said. “I knew that because it was something different, I had to make sure I knew what I was doing and make sure the parents understood that, even though they’re toddlers, we have to set up an environment where they’re going to thrive and really learn. So, I think the parents got used to it pretty quick. It was a learning experience for everyone.

“It also made me realize what I was going to be doing was just as important as what’s happening in the school system, and in a lot of ways it’s even more important,” he said.

Before Darby retired, he had a chance to get to know the children of some of the children in his earliest classes.

Because of the COVID-19 pandemic’s restrictions on parents entering the center, Darby was often the staff member greeting children at the door to walk them back to their classrooms after being dropped off.

“Here Danny is, this huge, muscular guy, and he’s holding Leo’s little, tiny toddler hand. It’s just the most amazing sight because of our history and the fact that Danny really helped raise me in my early years,” Owen-Smith said. “To see him, hand-in-hand with my son, it’s a testimony to what an amazing person he is and how long he’s been a part of this important space for so many little ones.”

Mallory McKenzie (MBA ’18), director of alumni programs for the Georgia State Alumni Association, was enrolled at the center as a child when her mother, Sheridan Gordon (B.A. ’91, M.S. ’96), was a student at Georgia State. McKenzie recently spoke to her mother about the decision to enroll her at the center.

“When she enrolled me, she was so excited to hear there was going to be a male in the classroom,” McKenzie said. “And when she met him, she was even more excited because he was so gentle, kind, good with children and passionate about his work. She was comforted that he had a presence there, and I grew up in a diverse classroom.”

McKenzie’s 2-year-old son, Charlie, has been enrolled at the center since he was 12 weeks old.

“It’s been so special to come full circle and not only work at Georgia State, but to have Charlie be at the same center I went to,” McKenzie said. “It’s been really meaningful.”

Simone Grant is studying applied linguistics at Georgia State, and as a student has had her 3-year-old daughter Kennedy enrolled in the Child Development Program since she was 5 months old.

Grant remembers having a birthday party at the center as a preschooler. Her mother was out of town that day and wasn’t sure she’d be back in time for the party. Darby helped set up for the party and stayed especially focused on Grant to keep the anxiety about her mother at bay.

“I wasn’t sure if she was going to be there or not, and he understood what was going on and what I needed at the time,” Grant said. “He helped to keep me calm, and we played, and he helped keep me distracted during the day until my mom got there.”

“To see him, hand-in-hand with my son, it’s a testimony to what an amazing person he is and how long he’s been a part of this important space for so many little ones.” — Ashli Owen-Smith

(Left photo) A preschool-aged Ashli Owen-Smith (bottom row, fourth from left) grins during a class photo with Danny Darby. (Right photo) Today, Owen-Smith (left) is an assistant professor of health policy and behavioral sciences in the School of Public Health. Her 3-year-old son, Leo, is enrolled at the center.

(Left photo) A preschool-aged Ashli Owen-Smith (bottom row, fourth from left) grins during a class photo with Danny Darby. (Right photo) Today, Owen-Smith (left) is an assistant professor of health policy and behavioral sciences in the School of Public Health. Her 3-year-old son, Leo, is enrolled at the center.

As much as he was a mentor and teacher to the children in the program’s care, Darby has also been a role model to those with whom he worked.

Ruby M. Hopkins, who retired in 2015 but now works as a part-time supervisor in the Department of Early Childhood and Elementary Education, was already working at the center when Darby started.

“He has such a calmness around him that just brings peace to children,” Hopkins said. “He’s the person that, if there’s a challenging situation, you just know he’ll handle it. He treats everyone with respect, from the youngest to the oldest. He’s so kind to everyone.”

Stacey French-Lee (Ph.D. ’18) knew Darby by reputation before she began working at Georgia State in 1998. Her first job with the program was as business manager. She became the executive director of the Child Development Program in 2000 and oversees the program’s two centers, the original Lanette L. Suttles Child Development Center and the Capitol Hill Child Enrichment Center, which Georgia State took over 12 years ago. 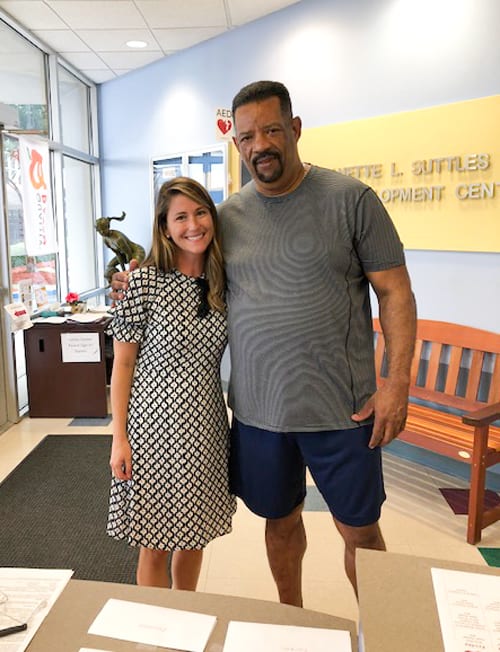 Mallory McKenzie’s (MBA ’18) 2-year-old son, Charlie, has been enrolled at the center since he was 12 weeks old.

French-Lee is also a clinical assistant professor in the Department of Early Childhood and Elementary Education.

“Before I started at Georgia State, I was already in the early care and learning field in Atlanta, and Danny was already known in the community as a great teacher, trainer and role model,” French-Lee said. “In the building, he was legendary among parents.

“I learned a lot from Danny about high-quality early care and learning, about interacting with children and doing what’s best for individual children as well as groups of children.”

Because of the program’s support of Georgia State’s teacher education programs and early childhood research, untold numbers of educators have had a chance to observe Darby in the classroom and observe those he’s trained and mentored.

Phyllis Kimbro, associate director of the Suttles Center, started working for the program about two years after Darby. She remembers teaching 3-year-olds on one side of a large room, while Darby taught 4-year-olds on the other.

“He’s a trailblazer. The parents were always enthused and excited about Danny being their child’s teacher,” Kimbro said. “He is really good at sharing information with teachers and training teachers to be great teachers.”

Grant, whose daughter Kennedy is enrolled in the center, also briefly worked at the Suttles Center and got to reconnect with Darby as a parent and a co-worker.

For Darby, who is the oldest of six siblings and doesn’t have children of his own, the end of a career dedicated to nurturing and educating children won’t come abruptly. Though his final workday has come and gone, he plans to volunteer with the program. He may even be seen in the future, reading to children in classrooms or supervising student-teachers.

Georgia State Alumni Association 40 Under 40 honoree and rocket scientist Kavya Manyapu has been tapped to work with NASA’s Artemis program.
By Rebecca Rakoczy
After meeting at Georgia State, Lance (MBA ’03) and April (B.A. ’01) Ledbetter embarked on a lifelong journey together — as husband and wife and as co-founders of dust-to-digital, a Grammy award-winning record label mining music’s past to preserve it for future audiences.
By Henry Lake