Georgia State men’s hoops is a certifiable brand now, having played in four of the last seven NCAA Tournaments. Just look at the preseason Sun Belt Conference poll. A program that lost its top six scorers and has a first-time head coach would typically be picked so low it would have to look up to see the bottom of the standings. The Panthers are picked to finish in the top half of the Sun Belt (fifth), which is a statement.

This is a statement, too: The Panthers are moving into the glistening new 8,000-seat Convocation Center and it is no time to lay new track, or utter the word “rebuild,” even after losing so much scoring. You want to start a fight with that first-time head coach, Jonas Hayes? Just mention the words “honeymoon” or “grace period.”

“I want to be clear, the standard is the standard,” Hayes says. “It’s time for us to achieve more. That’s my hashtag.”

The 41-year-old Hayes, who grew up in southwest Atlanta just 6 miles from the Panthers’ new basketball home on Capitol Avenue, insists Atlanta and Georgia State are the gravitational center of basketball in the Sun Belt Conference. He is not going to allow that status to slip away.

In fact, Hayes aims for the program to hop up on a higher shelf — not just a regular in the NCAA Tournament but, once there, a team that does real damage.

During practices, one moment Hayes will hurl an f-bomb or two to stir his players into bearing down on defense.

“Somebody’s got to step up!”

The next, he’s the coach who allows a mischievous player to tap him on the right shoulder then duck behind his left shoulder in the classic, “Gotcha.”

“That’s terrible, blue, gotta fix it, blue,” he barks to the team outfitted in blue practice jerseys during a half-court scrimmage.

“If you’d have told me I can script my career for the best-case scenario, this would be it,” says Hayes, Georgia State’s new head basketball coach and an Atlanta native. While this is his first head coaching job, he led Xavier to the NIT title last season as the team’s interim head coach.

He spent the summer connecting with his players while also replenishing the talent. He dipped into the transfer portal to snag three players who will likely be starters: 6-foot-2 guard Dwon Odom from Xavier, 6-foot-3 guard Brenden Tucker from the College of Charleston and 6-foot-6 guard Jamaine Mann from Vanderbilt.

Odom scored 18 points in the National Invitation Tournament (NIT) Championship Game win over Texas A&M as Xavier was the surprise of March with four straight wins in the postseason. More surprising was Hayes stepping in as the interim head coach one game into the NIT run after his boss, Travis Steele, was fired, and leading the Musketeers to the championship in Madison Square Garden.

Hayes might have gotten the job permanently until Sean Miller was welcomed back to Xavier. Miller had the status of taking the Musketeers to four NCAA Tournaments in five years before leaving for Arizona.

No matter. Hayes didn’t just land on his feet, he notched his dream job.

“If you’d have told me I can script my career for the best-case scenario, this would be it,” Hayes says. “Growing up in the city, playing pick-up basketball upstairs in the Sports Arena … All the places I’ve been, all the jobs I didn’t get, and Georgia State is my first head coaching job? In my hometown, a stone’s throw from where I grew up? Well, you can’t make that up.”

Hayes’ first team looks short, like they may not get a rebound that doesn’t hit the ground first, but Hayes insists it’s OK to look undersized. But it’s not OK to look disjointed.

Hayes wants a “good decision-making team.” Having veterans like Odom, Mann and Tucker, who have played in a combined 184 Division I games, should bring some continuity sooner rather than later.

“The culture we are trying to create is based upon making proper decisions,” Hayes says. “We worry about process and making it a daily habit to make proper decisions, which means doing the little things.

“I was able to meet UCLA’s coach John Wooden and he said, ‘When you understand the importance of the little things, you realize there’s no such thing as a little thing.’” 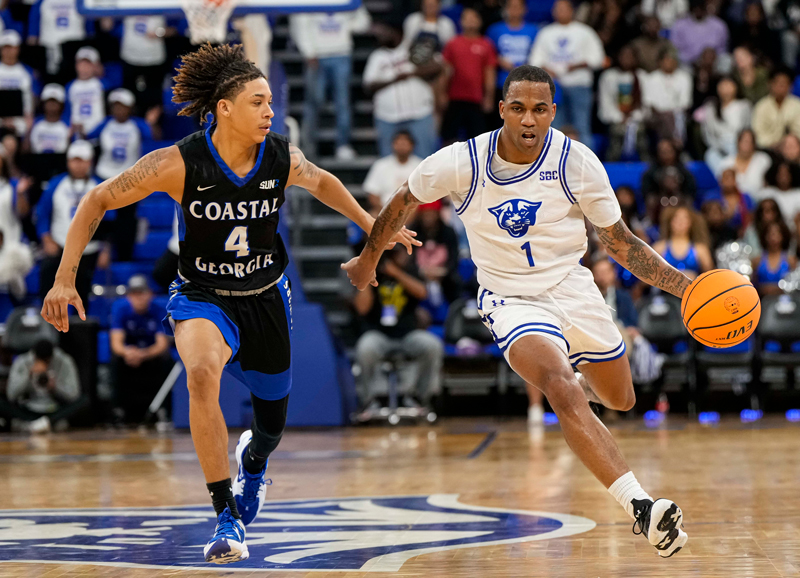 Sophomore guard Dwon Odom, a transfer from Xavier, led the Panthers with 16 points in a season-opening victory over Coastal Georgia, 76-59. Photo by Dale Zanine.

A big thing to Hayes has been establishing chemistry with each player. His hiring was announced in April, and he spent the next four months connecting one-on-one.

“We really didn’t have a typical summer,” Hayes says. “I spent all summer letting those guys be in the space they’re in. And I met them at their level. And I just wanted to connect with them and not do anything team-wise except put in a couple of concepts defensively.”

Evan Johnson, a 5-foot-11 sophomore guard, was a key reserve on the veteran 2021-22 squad and is primed to step into a starter’s spot this season.

“He’s changed my game a lot,” Johnson says. “He exposed my game a lot. It was more of a mental thing he helped me with. He gave me confidence, that confidence that starts within myself, and it took my game to another level.

“I was lacking mental awareness. He told me to stay ready. He’s going to give me an opportunity to play,” he says.

You watch Hayes conduct a practice and you see how he connects, Johnson says.

“It’s straight positive energy,” Johnson says. “He’s doesn’t let any negative energy in the room. If you’re having a bad day, he is going to pick you up. He acknowledges a bad play, but we build on it, instead of dwell on it. If you make a bad play, he’ll say, ‘That’s a bad play, get the next one.’”

Hayes takes over a Georgia State program that’s made it to four of the last seven NCAA Tournaments. “It’s time for us to achieve more,” he says.

Hayes has been building toward the moment he has the ultimate authority on the floor, and the loudest whistle, since he was a senior at Frederick Douglass High School in northwest Atlanta.

On the eve of a state playoff game, with his twin brother, Jarvis, the leading scorer, unable to play, Jonas stayed up until 2 a.m. in the family’s kitchen devising a game plan for the opponent, Chattahoochee High School. Jarvis sat with him as Jonas pored over tapes.

The next day, Hayes put the scouting report, complete with diagrams of Chattahoochee’s plays and tendencies, on the seat of each player on the bus. They were to study it, no questions asked, no talking.

Douglass won in an upset and advanced to the final four.

“Even when he was in high school, he was always a coach on the floor and saw the game through a coach’s lens,” Jarvis Hayes says. “With Jonas, you saw from the jump he was going to be a coach.”

Jonas and Jarvis starred at the University of Georgia in the early 2000s after they both transferred from Western Carolina. Jarvis was drafted by the Washington Wizards in 2003 and played seven years in the NBA. After graduating in 2004, Jonas jumped headlong into his coaching career, beginning as an assistant head coach in Atlanta at Morehouse College.

He was the assistant coach at Georgia from 2013 to 2018, and he joined the staff at Xavier thereafter. He earned a reputation there as a top-notch recruiter and player development coach. As the team’s interim head coach during the postseason, he led the Musketeers to four straight wins, defeating Florida, Vanderbilt and St. Bonaventure, and beating Texas A&M in the NIT Championship Game.

Jonas Hayes is not shy about his mission at Georgia State. It’s more than winning basketball games, he says. He wants to be a moral influence on his players, like his parents were with him and his brother, and three other siblings.

He exhorts his team “treat people right,” a demand that came from his father, a meat inspector for the state’s agriculture department.

The coach might make that one of his hashtags.

Nearly three decades after completing his M.S. in Finance, CFO Jim Tait still refers to his class notes when he needs advice.