As we welcome a new guard of senior leaders, Georgia State gains even more momentum. 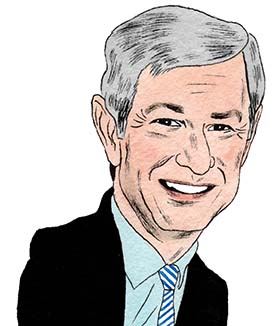 This summer was a time of transition, and we’ve had several changes in key leadership positions. We wish our departing colleagues well as they head on to the next chapters of their lives, and we’re excited to pursue Georgia State’s ambitious agenda with our outstanding new leaders.

We said farewell to Tom Lewis, who retired after a long career as an invaluable counselor who helped build relationships with leaders under the Gold Dome and in our nation’s capital. Walter Massey, our longtime vice president for development who led the most successful capital campaign in university history, has also announced his intention to retire once we complete our search for his replacement.

Jim Weyhenmeyer, vice president for research and economic development, has moved on to Auburn University, where he now holds a similar position. Michael Eriksen, former dean of the School of Public Health, is the interim vice president, and he is exceptionally well prepared to push our research agenda even higher.

Peter Lyons, inaugural dean of Perimeter College after its consolidation with Georgia State, has also returned to the faculty. Nancy Kropf, former dean of the Byrdine F. Lewis College of Nursing & Health Professions, has taken over and is building upon Peter’s good work.

Our leadership may be changing, but our unwavering commitment to our vision for Georgia State is not. We are recognized as one of the nation’s most innovative universities, and we will continue to be. We’ve pioneered student success initiatives, such as chatbots and Panther Retention Grants, that have been admired and copied by other institutions around the country. We are introducing new approaches and tools for teaching and learning and have one of the fastest-growing research enterprises in America.

The size of our graduating class and the number of applications we receive continue to set records each year. Firmly established as the major catalyst for the revitalization of downtown Atlanta, we transformed Turner Field into Georgia State Stadium, spurring new development and adaptive reuse along Georgia Avenue throughout Summerhill. Over the next few years, we’ll add a new convocation center nearby as well.

This summer, in my conversations with colleagues at Georgia State as well as with leaders in Atlanta, throughout Georgia and at institutions of higher education around the country, I’ve heard a loud and clear message: Keep pushing on the accelerator and continue building on Georgia State’s momentum. That message drives us every day.

She’d dreamt of becoming an astrophysicist since the eighth grade. But when doctoral student and single mother India Jackson (B.S. ’11, M.S. ’13) won a prized internship at NASA, she couldn’t afford the move to Houston. Then, the world came to her aid.
A law professor for most of the day, Samuel Donaldson also turns a trade as a builder of puzzles and often finds ways to cross one with the other.
Atlanta’s historic Summerhill neighborhood and its main artery, Georgia Avenue, are in the midst of a renaissance. And it all started when Georgia State bought a Major League Baseball stadium.