When the College of Law opened its doors to 200 students in fall of 1982, it merely occupied the first floor of Georgia State’s Urban Life Building with six full-time faculty members. While each professor brought unique talents to Georgia State Law, they all shared Founding Dean Ben F. Johnson Jr.’s vision of serving the community — and Linda Earley Chastang was excited to be a part of the group.

“It was exciting,” Chastang said. “Dean Johnson was committed to having not only a diverse student body, but a diverse faculty, and I certainly could help him with that. I was 27-years-old, so I was the youngest, the only woman and the only person of color.”

Chastang taught at the College of Law for five years. During her tenure, she helped create the Atlanta Bar Association’s Minority and Diversity Clerkship Program, which still exists today. “The law firms knew that they needed to become more diverse, and we could help to provide a pipeline of diverse and excellent talent,” she said.

She also spearheaded the Black Law Students Association (BLSA) chapter at the College of Law. It was particularly important to her because so many of the students had full time jobs, families and other responsibilities, and BLSA could provide a valuable support system. 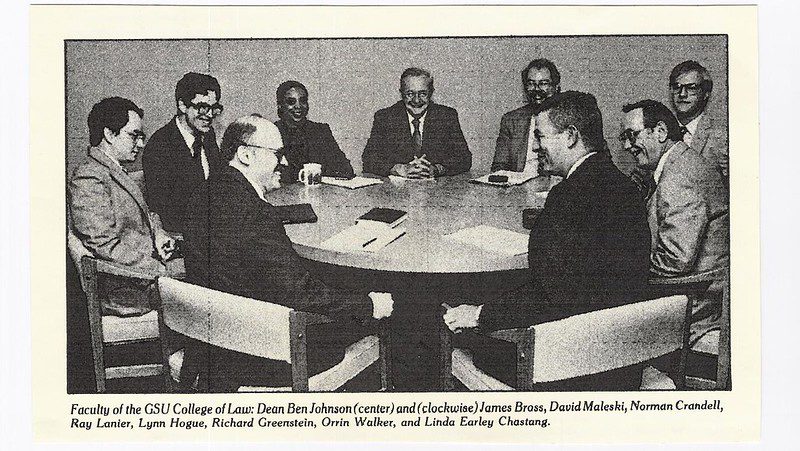 Founding Faculty at the College of Law

Chastang left the College of Law in 1987 and relocated to Washington, D.C. where her husband had accepted a position.  She first became general counsel for the NAACP’s Washington office, then the late Congressman John Lewis (D-GA) gave her a call.

“I knew John in Atlanta, and he called and asked if I would come over and be his administrative assistant and I said yes,” Chastang recalled. “I assumed that meant I would be something like a scheduler or secretary.  I told him, ‘If I can help you change the world, I will do it.’ When I got there, that’s when I discovered I was his Chief of Staff, I had no idea.”

Chastang served as Chief of Staff for Congressman Lewis three times. She also took on roles as his counsel and his Ways and Means Committee staffer.

“When John Lewis went on to the Ways and Means Committee, I didn’t know he knew I had an LL.M. degree,” she said. “He said to me, ’Linda, you have that degree in tax, so I want you to be my staffer on the Ways and Means committee.’  In a sense, I owe that to Ben Johnson who encouraged me to get my LL.M. and, although I had no interest in tax, the only LL.M [program] in Atlanta at that time was in tax at Emory.”

Looking back at her career, Chastang says she’s most proud of the moments she has been able to create something, which she feels she experienced while working for Congressman Lewis, and also during her time at Georgia State Law.

Even today, Chastang is still creating as interim president and CEO of the John and Lillian Miles Lewis Foundation.

“I thought it was an exciting thing to do, to be a part of a startup organization,” she said. “You wouldn’t believe the backgrounds of the students – physicians, police, college professors, administrators, paralegals, contract specialists who knew far more than I did about contracts, and they were all hungering for an opportunity to become lawyers. Georgia State Law was the best solution then and continues to be so now.”