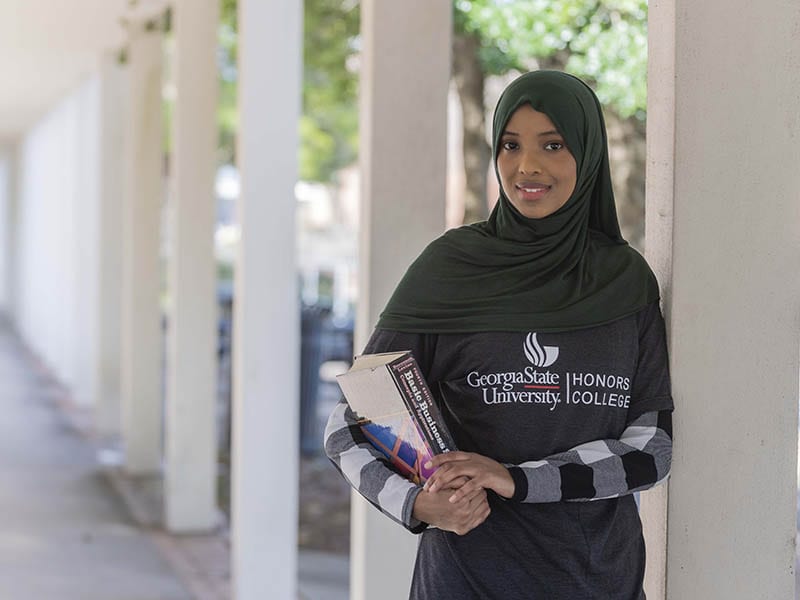 CLARKSTON, Ga.— For most of her life Fardowsa Hassan didn’t think college was an option. As one of eight children growing up in war-torn Somalia, she had never operated a computer.

Hassan’s life changed in 2017, when her family left Somalia and moved to Clarkston, Ga.

Within less than two years, she attended a new high school, learned English and applied to college.

Learning English was a struggle for Hassan, but mathematics came easily, she said.

“It was always one of my strongest points growing up,” Hassan said.

At Perimeter, Hassan found her passion for computer programming and computer engineering.

“I knew I wanted to work in engineering when I was at Clarkston High School and my adviser told me that Perimeter College had a good engineering program,” she said.

She became a tutor in MESA, the Mathematics Engineering and Science Achievement program, and an officer in WiSE, Women in STEM Experience.

An Honors College student, Hassan was accepted into the NASA Community College Aerospace Scholars program in fall 2020, after passing a rigorous online testing program. The participants usually travel to a NASA facility to work with scientists, but due to COVID-19, the program was virtual. Hassan was part of a team of students from across the Southeast working virtually to design a rocket system for the Mars Rover under the guidance of NASA scientists.

“I made 3-D designs on AutoCAD for the microprocessors and central processing unit for the rocket’s computer,” she said.

AutoCAD is a commercial, computer-aided design and drafting software application.

Hassan loved computer programming, but her parents were initially hesitant about the field.

“My parents had not gone to college, but they really value education,” she said. “They are concerned with their children getting a college degree. But they didn’t know about working with computers and the engineering profession. We literally didn’t have access to this world of engineering and technology where I grew up, and I had to convince them how much I liked the classes. They are now really supportive of my field.”

Hassan’s professors support her as well.

“My engineering professors are very involved and very helpful — they really double-down as professors and advisers,” she said.

Dr. Janna Blum, associate professor of chemistry and MESA supervisor at Perimeter, has been impressed by Hassan’s engagement and hard work.

“Even virtually, Hassan has made her mark at Perimeter College,” Blum said. “She has been an invaluable member of MESA. She became a peer tutor in all STEM subjects (science, technology, engineering and math). Her largest contribution has been her ability to clearly communicate methods and problem-solving strategies to her peers in MESA. I am very proud of Fardowsa, and she is very deserving of this recognition.”

Hassan, 20, is interested in completing her bachelor’s degree in engineering at Georgia Tech, Kennesaw State University or the University of Georgia. She says she can’t leave Georgia because her siblings and parents need her help. The Jack Kent Cooke scholarship would allow her to pursue her education without going into debt, she said.

Since 2002, the Jack Kent Cooke Foundation has awarded 21 Perimeter students the undergraduate transfer scholarship, which provides each recipient up to $40,000 per year to complete bachelor degree studies.

Hassan hopes to use her skills to develop computer software and help children in her native country get computers.

“In all my years in Somalia, I never had a computer, and when I came here, it was so fascinating to learn what they can do,” she said. “I want to help people from low-income societies learn about computers and be connected to the world.”