The Georgia State Law Center for the Comparative Study of Metropolitan Growth has published a new edition of its Journal of Comparative Urban Law and Policy, “Festschrift II in Honor of Julian Conrad Juergensmeyer on the Occasion of His Retirement: International Perspectives on Urban Law and Policy.” Juergensmeyer has taught environmental law and land use law for 55 years, 21 of which have been at Georgia State Law. He is retiring at the end of this semester.

This special edition of the journal, which he helped start at the College of Law, features tributes and articles written by his dearest friends and colleagues. Read it here.

“Editing this special edition that honored Julian’s long and impactful career was a great honor,” said Karen Johnston, associate director of the Center for the Comparative Study of Metropolitan Growth and managing editor of the Journal. “I have learned so much from him, and am incredibly thankful for the global perspective he has given me, friends he has introduced me to, and endless support through every step of my career.”

Juergensmeyer’s research has contributed greatly to the development of the academic study of environmental and land use law. He has published more than 100 books and articles, including a leading treatise on Land Use Planning Development Regulation Law, which is widely used by law and planning practitioners and frequently cited by courts, including the U.S. Supreme Court. Julian is also considered a pioneer in the development of infrastructure finance-oriented regulations, such as impact fees. 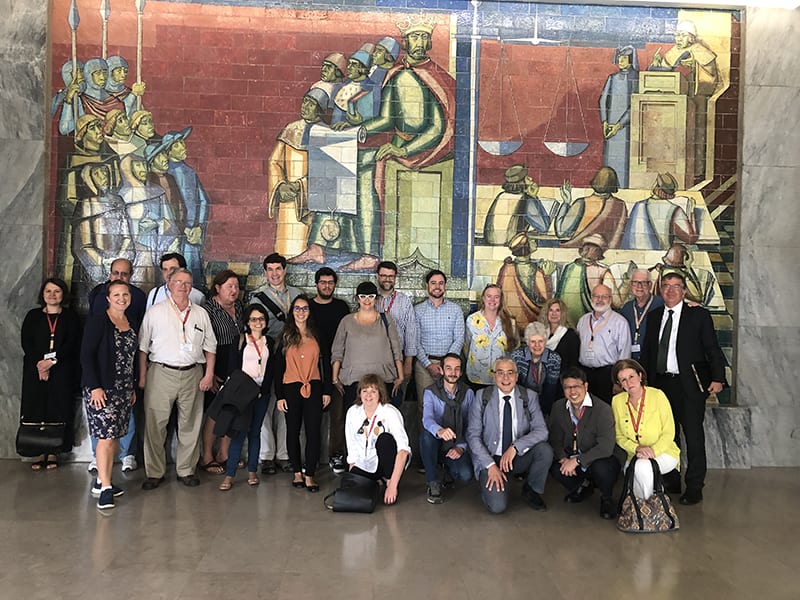 In his time at Georgia State Law, he shepherded a number of unique programs, including co-founding the Center for the Comparative Study of Metropolitan Growth; creating the masters in city & regional planning/juris doctor dual degree program; leading the Study Space Workshop, which brings together scholars from around the world to problem-solve urban development issues; and teaching in the Urban Fellows program, an interdisciplinary program that brings law students and Georgia Tech graduate students together to discuss pertinent issues.

“Julian’s impact on planning practice and policy has been immense,” said Ryan Rowberry, associate dean of academic affairs. “As just one example, he is one of the pioneers of impact fees, which has revolutionized how local governments and municipalities think about planning permissions and their relationship to developers. Julian’s work over the past 50 years has caused us all to think more deeply about how we use our resources and the trade-offs that inevitably arise from development. He has helped lay many of the foundation stones upon which much of modern planning and land use law rests.”

In addition to tributes to Juergensmeyer, the journal features 27 articles written by leading scholars from 13 countries, including an article by Dwight Merriam, an attorney and city planner, on the urgent need to include pandemic planning in city planning; a piece from James Kushner, a professor at Southwestern Law School, on how great cities have succumb to climate change; and another on regulating micromobility in urban centers by Georgia State Law students and faculty. Remaining articles cover a wide range of topics including: an urgent call to change land use law and regulation; climate change; affordable housing policies in England, U.S., Brazil and France; seniors and housing; sustainable urban development; and historic preservation.

“I am elated and touched by the articles in the Festschrift and their authors,” said Juergensmeyer, Ben F. Johnson Jr. Chair in Law and director of the Center for the Comparative Study of Metropolitan Growth. “I am especially honored by the fact that I have known and worked with so many of the contributors for most of my career. I would like to extend heartfelt thanks to all who have honored me so greatly by making Festschrift II possible – authors, editors, staff, student research assistants, and GSU Law administrators. I will be eternally grateful.

The Journal of Comparative Urban Law and Policy features research from leading scholars and practitioners in the areas of development, land use and environmental law and policy. The journal is read in more than 150 countries around the world. Scholars who want to contribute articles to the journal should email Karen Johnston.