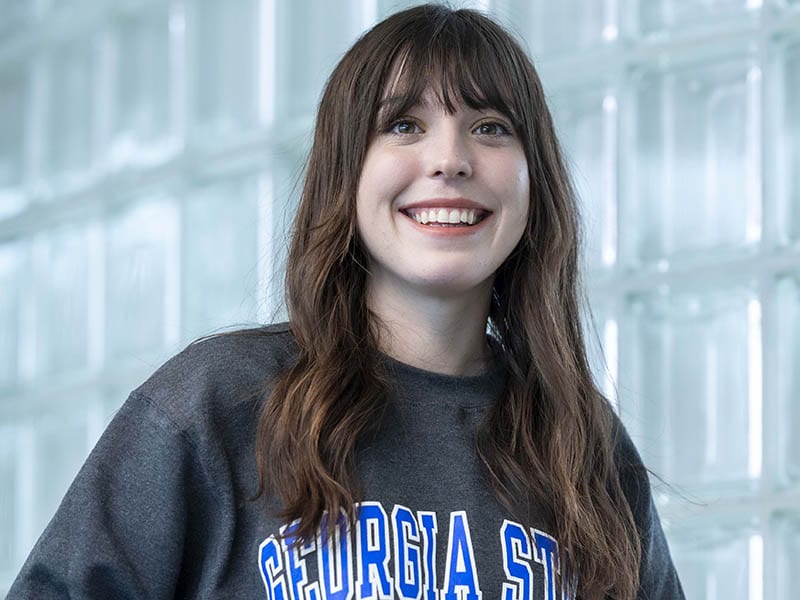 DECATUR, Ga.—Rachel Hefner is dreaming bigger than she ever imagined.

Set to graduate from Georgia State University’s Perimeter College this spring, she hopes to transfer to Cornell University, Amherst University or the University of Georgia to study horticulture.

No matter where she lands, Hefner — at 25 — feels good about the direction of her life, which includes being a semifinalist for this year’s national Jack Kent Cooke Undergraduate Transfer Scholarship, one of the country’s most generous awards for community college transfer students. The selective scholarship is reserved for top two-year college students seeking to complete their bachelor’s degrees at four-year institutions. It provides recipients up to $40,000 per year for up to three years.

Hefner said that during her high school years, she lived in an unstable home where she often dealt with not having enough to eat. During her junior year, she dropped out of high school to work full time and help out with groceries and other bills. Eventually, Hefner left home altogether.

With no clear idea about what she wanted to do, she headed to Atlanta, where she worked various low-wage jobs and slept on friends’ sofas. She also experienced homelessness and hunger before falling into what she calls “a bad hole of depression.”

“I felt really unfulfilled and wanted to do something more meaningful with my life,” Hefner said. “And, I felt the best way was through education.”

In 2018, she enrolled at Perimeter College to study social work and found her happy place  —  not only in the classroom, but also in the Decatur Campus community garden, where she cultivates crops to benefit others and herself.

Hefner received a Pell Grant to help with college expenses and – though she has attended classes full time – she typically has worked, as well. But during her early days at Perimeter, she sometimes didn’t have enough income and once again endured food insecurity.

She stretched her food supply by cutting meals in half, “eating once a day and going to sleep when … hungry,” she said.

“I see myself in 10 years hopefully having my own farm,” she said, “a plot of land in the city that would serve lower income communities or those living in food deserts.”

Hefner is also “big into politics,” noting that she has worked on the presidential campaign of democratic candidate Bernie Sanders and participated in Atlanta area demonstrations on issues such as climate change, women’s rights and immigration.

Dr. Robert Woodrum, an associate professor of history, recognized Hefner’s passion for politics in a research paper she wrote for his class a year ago.

“Rachel focused her paper on Betty Friedan, the author of ‘The Feminine Mystique,’” Woodrum said. “She did a good job of covering the topic. … She explored the ways that racial and economic disparities limited the advances for women of color and working-class women. … She raised a lot of complex questions in the paper, and the final product was really wonderful.”

In addition to her studies, political involvement and community garden volunteerism, Hefner has served as a Supplemental Instructor, which is a peer-to-peer tutor at Perimeter. She also worked 30 hours each weekend as a server at a Midtown restaurant, before it temporarily closed due to the coronavirus public health crisis.

With the announcement of this year’s Jack Kent Cooke scholarship recipients expected in only a few weeks, Hefner is excited about the possibility of winning. Since 2002, 19 Perimeter students have received the scholarship and used it to further their studies at institutions in Georgia and nationwide.

Hefner is happy about the strides she has made thus far and her prospects.

“If someone would have told me while I was homeless that in several years I was going to be applying to Cornell, I wouldn’t have believed it,” she said.