From red carpet Hollywood premieres to the Great White Way, actor and producer, Carra Patterson (B.A. ’06) has been chosen to be among the 40 Under 40 class of 2020. Through a formal nomination and selection process, the Georgia State University Alumni Association recognized Ms. Patterson as one of the most influential graduates who represent Georgia State.

In 2017, Ms. Patterson starred on Broadway in the only female role of August Wilson’ “Jitney,” which took home the Tony Award for Best Play Revival. Most recently, Ms. Patterson was cast in lead roles for two comedy television pilots, Fox’s “Patty’s Auto” and Showtime’s “How to Make Love to a Black Woman.” Perhaps her most noted on screen work includes her role as the wife of rapper Eazy-E in the critically acclaimed film “Straight Outta Compton” and her recurring role as Shaun in the “The Arrangement,” television series.

Ms. Patterson’s rise to fame is rooted in hard work, perseverance and a commitment to education. Her mother’s emphasis on the importance of education, both in word and in action, had an indelible effect on her. As a child, some of her earliest memories are of attending university with her single mother as she pursued her degree.

In an interview with Power 105.1 FM Ms. Patterson dispelled the notion that learning stops after college. “You have to really train and do your research. Follow actors you admire and the choices they’ve made in their career.”

Ms. Patterson even shared that she had more than 30 side jobs while awaiting auditions, including selling teeth whitening products at Lenox Mall. Her first role on camera was as a featured extra with no lines in Tyler Perry’s “Madea’s Family Reunion.” She also knows the pain of rejection but counts it all as valuable lessons.

“My first professional rejection prepared me for success more than any achievement ever has. I landed my first major theatre role in Atlanta when I was cast in a musical directed by a widely respected Broadway director. During rehearsals, the director asked me to sing my solo, but it was in a key too high for my voice and I crumbled under the pressure. The next day, I was stripped of my leading role while the entire company watched. In turn, I was given a background role. This left me with a decision: either quit the show, or take the smaller role and deal with the shame of working alongside a cast who had watched me fail.

I chose to stay.

What I perceived as a failure turned into one of the greatest lessons of my career. By staying and facing that major rejection, I learned a resilience and perseverance that has allowed me to endure in an industry where rejection is constant and has caused many others to quit. Years later, that same director cast me in my first Broadway show.” 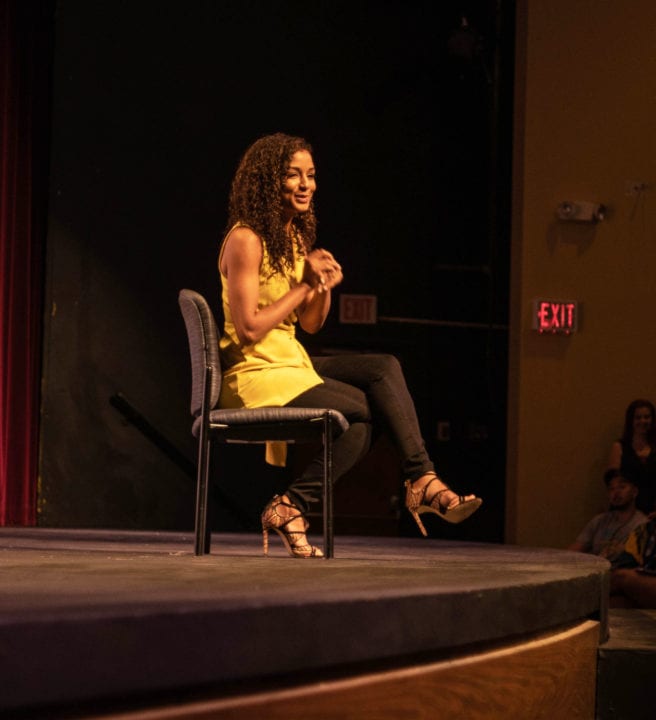 Off-screen, Ms. Patterson is just as committed to making her mark with a passion for mentorship and community outreach. She has worked with various non-profit organizations nationwide and abroad including Youth V.I.B.E Atlanta, the Epic Theatre Ensemble in New York and Covenant House Vancouver in Canada.

With numerous projects in production, this former Panther is making a name for herself in the industry, and there’s no stopping her. Her words of advice: “Get specific, and visualize what you want. Set goals.”

The 2020 class of 40 Under 40 alumni awards ceremony and reception takes place on March 26 at The Fairmont, 1429 Fairmont Ave. NW. For tickets, visit: pantheralumni.com/40under40