Welcome Home
Zack Eller turned a good deed from his childhood into a promising career.

A local holiday is named after finance major Zack Eller.

On Oct. 17, residents of Milton, a north Atlanta suburb, observe Zack and Thomas Eller Adopt a Shelter Pet Day. It all started on Zack’s sixth birthday, when his mother suggested he donate dog food to the local animal shelter in lieu of receiving gifts. He and his little brother eventually tweaked a dog treat recipe and formed Woof ‘Em Down Dog Biscuits, routing all the profits to pet rescue. Since then, they have contributed more than 1,000 pounds of dog food and raised more than $15,000 to care for homeless animals. 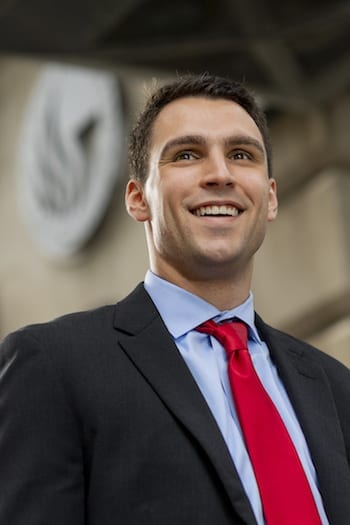 The endeavor demonstrated his natural skills with organization and cash. As for college, all he cared about at first was graduating as quickly as possible. Drifting from place to place — somewhat like the dogs he helps — he attended four institutions before coming to Georgia State.

There, a course with Omesh Kini at the Robinson College of Business changed his mindset, turning him on to the world of finance and the extracurricular activities the college offers. He felt like the school had adopted him into a new home.

“Before, I just wanted to get my piece of paper and try my hand in the real world,” Zack said. “I’m thankful I came to Georgia State because now I realize education is so much more than that.”

Eller enrolled in Robinson’s Honors Track in Finance, a two-semester sequence of rigorous classes that forces him and his classmates to think critically.

“The instructors know we’re all smart,” Zack says. “They won’t let us get away with memorizing answers and spitting them out on tests.”

Zack’s internship as a financial analyst at the Oxford Center for Entrepreneurs crystallized into a full-time gig he will start after graduating this December. He found out about the opportunity through a Panthers on Wall Street alumnus who wanted to pass the torch to a fellow program participant.

Next month, Zack will receive much more than a degree. He’ll graduate with certainty that finance is the field where he’s meant to be.