The History of Homecoming

The History of Homecoming

Even though it’s evolved quite a bit over the years, Homecoming is the longest running tradition on campus. It had its beginnings in the annual banquets going as far back as 1916 when Georgia State was the Evening School of Commerce at Georgia Tech.

By the late 1920s, the Thanksgiving week banquet and dance had become a more formalized event, with prominent speakers and well known musical entertainment. More than 300 students attended the event Nov. 21, 1930, which included the president of Coca-Cola Company, the presentation of academic awards, a roller-skating exhibition and ended with dancing to the Yellow Jacket Orchestra, which performed the “latest jazz stunts of the year.”

In 1932, the school was removed from Georgia Tech’s supervision, and the independent entity that would eventually become Georgia State moved under the new University System of Georgia. On Nov. 29, 1933 more than 400 attended the school’s fall banquet at Davison’s Tea Room at 180 Peachtree St.

The next year’s banquet (regarded in later years as the first homecoming) was held Oct. 15, 1934, at Tabernacle Baptist Church at 152 Luckie St., (now the Tabernacle concert hall). Afterward, the Evening Signal student newspaper featured an article by the student council president describing a plan to replace the “Annual Fall Banquet” with a “Homecoming” day to be celebrated Feb. 8 with a banquet and a dance. Alumni would be welcomed again, “to renew their friendship with the school.” That year the Evening Signal also announced a contest for the creation of a “Spirit Song.”

That 1935 homecoming attracted 800 students, alumni and friends of the school. The following year, on Feb.19, Homecoming was held at the Atlanta Athletic Club, beginning with a banquet at 7 p.m. and continuing with a four-hour dance from 9:30 p.m. to 1:30 a.m. “The Fourth Annual Homecoming,” as it was advertised, then returned to the more traditional fall date and was held again on Nov. 24, 1936.

Homecomings were originally organized by the student council (later the Homecoming Committee of the Student Government Association) with help from administrators. Homecoming Day became Homecoming Week in 1966 and alumni sponsored the Miss Georgia State contest. Activities were scheduled in late November during Thanksgiving week.

In 1972, Panthers basketball re-energized the event and became a focus as the Homecoming Committee changed the date back to February. By 1976, cheerleaders held regular pep rallies and the Spirit Award was given to the campus group that most actively supported Homecoming. Homecoming became a low-key fall banquet for alumni held at a local hotel between 1979-1984. By 1985, Homecoming was reinstituted with a late January and early February schedule with some events held at local hotels.

Winning basketball teams, big name entertainment and new mascots Urbie and later Pounce, revitalized activities in some years. Inclement weather disrupted events in other years, however, and with the arrival of the football program in 2010, Homecoming returned to the fall activity as we know it today.

In honor of this longstanding tradition, the University Library will be hosting a Throw Back Thursday event from 10 a.m. to 1 pm on October 19th in Hurt Plaza and complementary activities at the Perimeter Campus libraries to celebrate Georgia State’s history. 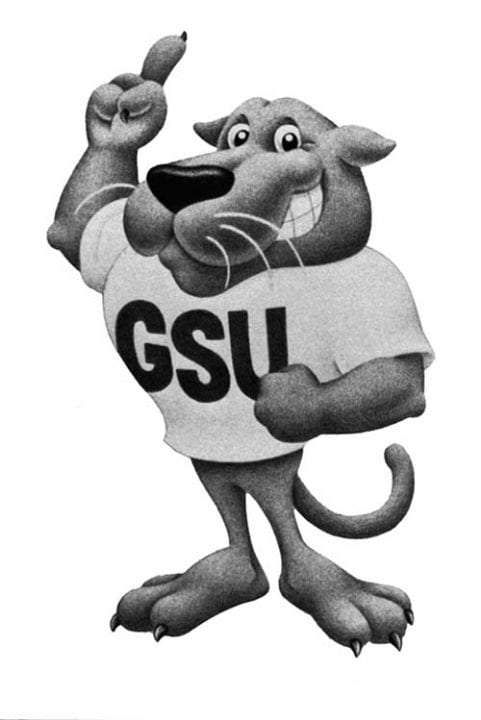 Banquet and Dance
These events were held from the 1930s until 1969 at various locations in Atlanta. In the 1930s, the Shrine Mosque and Davison’s Tea Room were popular. After an auditorium and gymnasium was erected behind Kell Hall in the 1940s, both events were held there. The banquet was held in Sparks Hall after its completion in 1955, with the dance being held in Municipal Auditorium (now Dahlberg Hall). Starting in the late 1960s, concerts during Homecoming Week began attracting more interest from students than the banquet and dance, and eventually replaced them.

Scholarships and Awards
Students and alumni were lauded at the banquets, starting with the Retail Credit Company Scholarship in the 1930s. The George Sparks Scholarship was established in 1955 and later supported by Sigma Nu’s “Ugly Man Contest” and The Sweepstakes. This was an inter-sorority event at Indian Creek Lodge, with events such as the mud-pit race, tug-of-war and raw egg toss. Beginning in the 1960s, awards were presented to alumni, including the Outstanding Alumna and Alumnus and the Distinguished Service Award. Starting in 1974, both Mr. and Ms. Georgia State received awards and were introduced, along with the Homecoming Queen, during halftime at basketball games or during the Homecoming concert.

Decorating Contests
“Flats,” large freestanding poster displays, were based on a theme to welcome alumni and submitted by Greek and other campus organizations. These became popular starting in 1958 and quickly evolved into floats. By 1966, those floats became motorized parades. Parades were held on campus streets until university status was granted in 1969, when then-Governor Lester Maddox led the festivities down Peachtree Street.

Do you have other questions about Georgia State history? Ask us! Send us your questions to archives@gsu.edu or @gsu_archives on Twitter. Visit us online at library.gsu.edu/specialcollections.