The Rise of the Pokéconomy 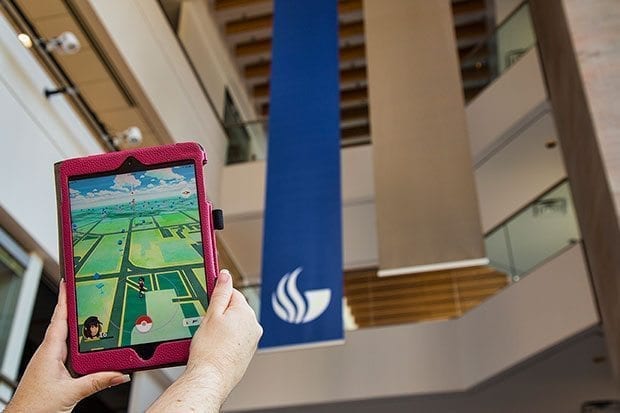 A new phenomenon has swept the globe: Pokémon Go. Released in the U.S. on July 6, 2016, the augmented reality mobile game arrived with record-shattering numbers. Robinson’s associate professor of marketing, Denish Shah, has been watching the game and its impacts in the market avidly. “This ramp up in numbers is unprecedented,” Shah says of the game’s explosive popularity. As of July 19, 2016, the game has been downloaded more than 10 million times in less than a month.

In the Pokémon Go game, players capture and battle a variety of creatures called Pokémon. To find these creatures, the players must walk around in the physical world with the game on their phone to unlock the Pokémon hidden in the digital world. The game utilizes GPS services and the phone’s camera to display the Pokémon on top of the world around the player. Augmented reality allows players to interact with digital elements that are overlaid onto the everyday. In Pokémon Go, players can visit places called Pokéstops to get free items, such as power-ups and health potions, for the game. These Pokéstops are located at local stores, museums, historical monuments, churches and notable features. To access these stops, the player must physically go to these locations. Shah already sees major effects. “Given the popularity, it’s going to have long-term impact on how augmented reality is going to play a role in businesses and day-to-day life in general.”

But why has Pokémon Go become such a phenomenon?

“Those three together create this perfect storm and that’s why it has just gone off the charts,” Shah says of the game’s incredible fame. But the game isn’t just netting downloads; it generates between $2 to $5 million daily with purchases made in the game. Nintendo, one of the creators of the game, has seen market values increase by $9 billion dollars since its launch.
The game isn’t just impacting creators Nintendo and Niantic Inc. Shah sees it as a new tool for marketers and brick and mortar stores. Augmented reality has the ability to bridge the gap between a digital ad and a physical purchase in a store. “This game has demonstrated that it is possible to use digital to bring in lots of people. It will be an effective crowd puller as far as offline businesses are concerned. It’s certainly a stronger pull than banner ads, which are increasingly becoming annoying,” Shah says. Retailers can use the game to encourage visitors into their stores, which then become part of the game and the Pokémon community.

For marketers, games like Pokémon Go can help reach the millennial generation, a group who generally shies away from network television and other more traditional advertising mediums. By interacting with consumers within a game, there is a new avenue for communication. Shah predicts, “We can expect a wave of new augmented reality games based on formerly popular characters, because they’ve figured out this seems to be a successful recipe to launch a new game using something that was successful earlier.”

For now, the future of Pokémon Go depends on how well developers can handle demand and keep creating novelty for players. The overwhelming response to the game has resulted in problems with game freezing and the servers crashing. “Right now, the novelty factor is so high you can overlook those things, but the developer needs to keep creating new reasons for people to keep playing,” Shah says.

The impact of Pokémon Go is just beginning and Shah is watching it as he catches Pokémon of his own. “My six-year old son was very intrigued by it. I’ve caught a few for him.”