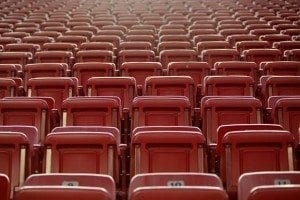 This will be the third Super Bowl to be hosted in Atlanta. The first was in 1994, in which the Dallas Cowboys defeated the Buffalo Bills 30-13, and the most recent was in 2000 when the St. Louis Rams defeated the Tennessee Titans 23-16.

“The announcement of the Super Bowl was good news for the image of Atlanta, which was dinged very badly in the last Super Bowl in 2000. Partly as a result of the bad weather and partly because of the question of whether we were prepared,” says Rajeev Dhawan, director of Robinson’s Economic Forecasting Center.

Since 2000, Atlanta has put in two bids to host the Super Bowl. Both were denied. So what has changed in the city that made the NFL owners think Atlanta can successfully host the world’s largest sporting event?

Dhawan explains, “By getting the Super Bowl, the NFL is sending a message, saying, ‘We have confidence that you can handle any curve balls that come your way, like weather or any other issues.'”

Debra Cannon, director of the Cecil B. Day School of Hospitality, says, “In 16 years we’ve become so much more sophisticated in this city about handling weather issues and also handling large crowds.”

“I can tell you that our emergency response plans will not only be refreshed, but in many cases, totally revised,” she continues. “We have better technology now. We will have supplies ready in the city if we have a drop of snow.”

The new $1.4 billion Mercedes-Benz stadium, scheduled to open in 2018, was very likely a big part of the city’s proposal. Choosing newly constructed stadiums as Super Bowl venues has been a recent trend, with next year’s game being played at the soon-to-open U.S. Bank Stadium in Minneapolis. The 2020 game will be in New Miami Stadium, which has seen significant remodeling, and the 2021 game is to be held in the Rams’ new Los Angeles stadium in Inglewood, California.

But in combination with the new stadium, the city now also can boast a slew of new developments around the Centennial Park area. Cannon goes on to say, “There’s the Georgia Aquarium, World of Coke, the Civil and Human Rights Museum, the College Football Hall of Fame, the Ferris wheel. All of those are new to that area, so we have a lot more to showcase.”

It’s going to take more than interesting attractions to keep the thousands of visitors happy during the Super Bowl, but Cannon thinks Atlanta’s hospitality industry is prepared for the influx. “From 2000-2016, we’ve grown by about 8,000 hotel rooms and that will grow even more with some new properties that are going to be opening up.”

Hotels, restaurants, transportation companies, entertainment venues, and caterers will all need to be on top of their games to satisfy the top-of-the-line clientele expected to be in the city.

Assuming everything goes smoothly and considering the improvements that the city has put into place since 2000 (and will continue to make leading up to the Super Bowl), Atlanta and its residents can bet on a nice return. Economic impact estimates of hosting large-scale events can vary widely and experts are typically divided on how much the game can benefit a local economy. “If you’re a booster then you take the highest estimate, and if you’re a critic you take the lowest one,” says Dhawan.

While putting an exact dollar amount on the Super Bowl’s economic impact can be difficult, Dhawan says that we can expect many non-pecuniary, or non-monetary benefits if the event is successfully executed. Christopher Lemley, managing director of the Professional MBA program at Robinson, agrees and says the Super Bowl can “enhance the brand of metro-Atlanta.”

An enhanced brand, more attention and more hype can translate into an increase in future events of all sizes.

“Research has shown that when a city hosts a major event like the Super Bowl, the interest level of holding conventions, conferences, even leisure travelers in that city goes up,” adds Cannon.

With an increase in corporate presence, media attention and business transactions, Robinson students will have innumerable opportunities to get involved and get major, world-class experience.

“This is an exciting time,” Cannon says. “Everyone’s resume can profit from listing that you’ve worked a Super Bowl.”