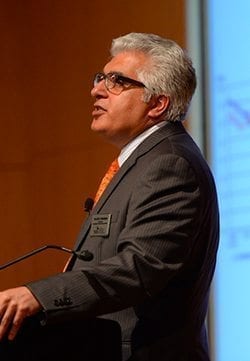 Merriam-Webster’s Collegiate Dictionary defines momentum as “strength or force gained by motion or by a series of events.” And according to Rajeev Dhawan, director of the Economic Forecasting Center at Georgia State University’s J. Mack Robinson College of Business, the series of events propelling economic momentum in 2016 aren’t pointing to a great deal of gain this year.

“Growth has been a subpar 1.0 percent in the last six months as consumption and high consumer sentiment has moderated sharply since last fall,” said Dhawan, who released his closely watched quarterly economic forecast on Thursday, May 26, with an expectation that gross domestic product (GDP) growth will be only 1.5 percent for 2016, down from 2.4 percent in 2015.

Why the drop? “The reasons are plenty,” the forecaster said, “but one of the most important is stock market performance. On paper, the market has shown gains, but the wild gyrations have led to countless sleepless nights. Add in political noise about the presidential primaries and upcoming election and the momentum indicator for consumer confidence is not up, but down.”

That’s not to say that consumers have completely slammed the brakes on spending. They’re just opening their wallets selectively. Household income gains since the end of Great Recession, which Dhawan characterizes as “solid, but half the size of those before the downturn,” combined with deep discounts from automakers, will spur consumers to buy 16.8 million vehicles in 2016.

Great news for automakers, but pretty much a momentum-killer for other sectors dependent on consumer spending.

“Auto purchases with loan-to-value ratios north of 100 percent and loan horizons of 84 months mean consumers are scrimping on discretionary spending, putting the pinch on visits to shopping malls and retail centers. Servicing the loan on that shiny new toy is the top priority, because a default or late payment could bring the repo guy’s tow truck to your driveway.”

Even more problematic momentum-wise, Dhawan said, is weak business investment over the past nine months.

Dhawan’s outlook is less dour after ballots are cast on Tuesday, November 8. He forecasts substantially more momentum in 2017, with GDP growth of 2.5 percent.