As the J. Mack Robinson College of Business prepares to graduate the class of 2016, we take a moment to highlight three of the incredible students walking across the stage on Saturday. 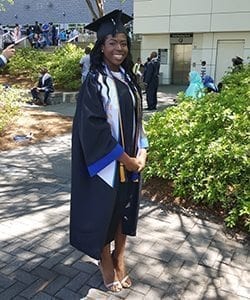 Originally from The Ivory Coast of West Africa, Ange Akproh started at Georgia State University (GSU) after finishing her associate’s degree at LaGuardia Community College in New York. When she began looking for a college to attend for her bachelor’s degree, GSU quickly became a top contender. “Robinson came up as a good business school, and I love the Georgia weather! When GSU offered me a scholarship, that was a major help in my decision,” she says.

Now two years later, she’s still enjoying the Georgia sunshine and preparing to walk across the stage on May 7 at the Georgia Dome. When Akproh began at Robinson she focused on finance, but she soon found a second calling in IT. Making the decision to double major, Akproh doubled her workload but handled it with ease, only having to add one additional semester to complete the requirements for both majors.

“I was excited to add in computer information systems to diversify my skills,” Akproh says, “And now I am interviewing at SunTrust, KPG, State Farm and a few other places. I hope to become an IT analyst.”

Her classes have prepared her for wherever her future will take her. In particular she recognizes David Beard, finance lecturer, and her finance 3300 class as helping her build the stepping-stones to prepare for a career.

Akproh realizes her success at GSU intertwines with the strong relationships she’s built here. “When I moved here it was a new dimension for me to experience. I had no friends. I knew nobody. Then I met people from the Ivory Coast like me. I met more people through them, and I found out about the Honors College and joined. My experiences in the Honors College defined my time at Robinson. I met so many people because of it.”

Akproh hopes that all students at GSU can build the strong, lasting relationships she’s had. “Be part of a community, because they will push you and motivate you. They will support you when you are feeling low. Reach out and make connections. You can learn from your group and those skills will help you excel after you graduate,” she promises.

Working full-time in the global company of UPS, Andrew Hurd knew he wanted to continue his education. Beginning in September 2014, Hurd joined the Flex MBA program with a dual concentration in international business and marketing. He’d seen several coworkers graduate from Robinson and after speaking with a coworker about her experiences in the PMBA, he applied.

“Between the national rankings and the reasonable tuition, this definitely offered the biggest return for me,” Hurd says. He took the opportunity to further his education and his career all at once with Robinson.

Managing full-time work with school is a challenge, but Hurd has handled it with support from his company. His work and school have blended together in several ways over the almost two years in his program. On a study abroad trip to Hungary and the Czech Republic, he was able to meet with UPS partners in Budapest and continues to have a working relationship with them more than a year later.

Already the program has benefited his career — Hurd stepped into a manager-level role in the global business services communications division in January 2016. “I was told in no uncertain terms that it was because I’d shown the initiative to go back for an MBA and because of how well I’ve balanced work and school,” Hurd says.

The classes and his job frequently worked together, and Hurd was able to bring his experiences to the classroom and to his employer. “We just did a big innovation challenge at work, and I was working on two related case studies in class. I could bring that experience from the case studies into work and make a direct connection,” Hurd says as just one example of how his classes have already helped him bring more experience and education into the workplace.

His negotiations class with Edward Miles, associate professor of managerial sciences, has left a lasting impression on Hurd. It’s shown him the importance of how to communicate your ideas while listening to opposing ideas. “Negotiation is learning how to talk to people who don’t agree with you and gain information from them. You want everyone to leave the table happy,” he says. When dealing with international cultures, as Hurd will be doing in his new job, this is a vital skill.

Going in to his program, Hurd knew exactly what he wanted with his degree, and he believes that is necessary for anyone considering going back for a graduate degree. “Do it because you’re passionate about it. Not to check some box off. I knew exactly what I wanted out of it and how it connected to what I was doing.” 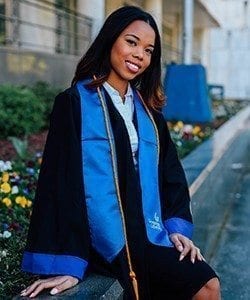 With only one class standing between her and graduation, Azhia Brown is totally focused and ready to walk across the stage to receive her B.B.A. in finance. As a first generation student, Brown has become the quintessential college student with deep roots in the Georgia State community. “Choosing to go to GSU is one of the best decisions I’ve ever made,” Brown says.

Ready for the college experience, Brown lived on campus her first year and joined University Housing as a resident assistant for the next two years. She’s also worked as a student assistant and as the PR social media director for student events (now Spotlight Events). Because of her experiences across campus, Brown has always felt truly a part of Georgia State. “The amazing events and opportunities are part of what makes GSU great, and I got to be a part of that,” she says. Helping coordinate events and managing her time and schoolwork made Brown more confident in her abilities.

She always knew she wanted to be a business student but wasn’t sure what field would be best for her. After a few false starts, she finally found a class that excited her: finance.

Becoming a finance major gave her a way to focus her studies, and while the classes challenged her, she always persevered. “I’d get frustrated sometimes but I’m still studying finance, and I’m still excited about it.” She credits Genna Brown, senior lecturer of finance, with pushing her to do and try more. “Corporate Finance always intimidated me, but Miss Brown always pushed me to try, so this semester I’ve been involved in the Chartered Financial Analyst (CFA) Global Challenge. When I got up to present I knew I knew it.” After experiences in the CFA Global Challenge, Brown is considering furthering her education in corporate finance.

As she graduates, she walks into a position as a financial analyst with Turner Broadcasting, a position she was offered after working as an intern last summer. She’s thrilled to be working in a company with so much potential for growth. She credits the job offer in part to the lessons she learned in her Business Communications class taught by Linda Willis, lecturer of marketing. “She taught us how to send a professional email, how to dress, shake hands. She taught us how to be a professional.” Those lessons helped her stand out as an intern with professionalism.

Brown shared that her most significant moment at GSU was her recognition at the Honor’s Day ceremony where she was awarded the John M. Dyer Scholarship. Her family came for the ceremony, and Brown found this moment the chance for her parents to really see her in her element at college. “I’m a Robinson College of Business student and the Honor’s Day ceremony really made it real for my family. It let them see what I have accomplished.”

She encourages students to not rush through their time in college. “There is beauty in the struggle,” Brown says. “Take your time to really learn, not just go to class.”

Congratulations to the Class of 2016! You are the future of business!