Robinson on the Rise

March is known for many things. March Madness. The first day of spring. The return of Daylight Savings Time. And, in academic circles, the “Best Graduate Schools” edition of U.S. News & World Report.

Robinson’s new rankings for its part-time MBA program came out on March 16 and were cause for celebration. The program surged in U.S. News rankings to No. 27 nationwide, a jump of 17 places from the prior year. Among public university programs, Robinson’s part-time MBA is now No. 17 (up 11 places). These numbers are all the more impressive considering that 296 business schools were evaluated. 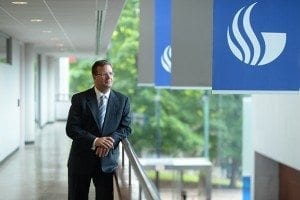 “The Robinson College’s dramatic rise in the part-time MBA rankings reflects the student-centered initiatives we have launched in the last couple of years, along with the high regard in which the college is held, the quality of our students, and our reputation for developing business leaders,” said Dean Richard Phillips.

In addition to Robinson’s part-time MBA ranking, the Department of Computer Information Systems was highly ranked by U.S. News, coming in at No. 12 among graduate-level information systems programs. The college’s Institute of Health Administration remained at No. 33 among healthcare management programs.

It’s been a great first quarter for Robinson in the rankings.

Between January and March 2016, the college also:

Heady stuff, but that’s not the half of it. Business school “rankings season” kicks off in September, and last fall brought plenty of great news in that arena.

“It is gratifying to see that Robinson’s rise in rankings cannot be credited to just one department; rather it is driven by multiple units across the college,” said Phillips.

Learn more about these and other Robinson College rankings