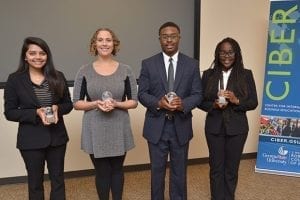 Patel and her teammates from Florida Institute of Technology, Howard University and Morehouse College were victorious with their five-year growth strategy for a fictitious rent-to-own furniture company considering international expansion to Mexico.

Marta White of the Department of Managerial Sciences served as faculty adviser for the Robinson College students who participated in the case competition. In addition to Patel, accounting major Stephen Drummond, marketing major Joana Müller, and finance and business economics major Raj Patel represented Robinson. All four are in the college’s honors program.

The Centers for International Business Education and Research (CIBERs) were created by Congress under the Omnibus Trade and Competitiveness Act of 1988 to increase and promote the nation’s capacity for international understanding and competitiveness. Seventeen CIBERs serve as regional and national resources to business people, students, and teachers at all levels. GSU-CIBER was established in 2010.

The largest business school in the South and part of a major research institution, Georgia State University’s J. Mack Robinson College of Business has 200 faculty, 8,000 students and 75,000 alumni. With programs on five continents and students from 88 countries, the college is world-class and worldwide. Its part-time MBA is ranked among the best by the Bloomberg Businessweek and U.S. News & World Report, and its Executive MBA is on the Financial Times list of the world’s premier programs. Located in Atlanta, the Robinson College and Georgia State have produced more of Georgia’s top executives with graduate degrees than any other school in the Southeast.