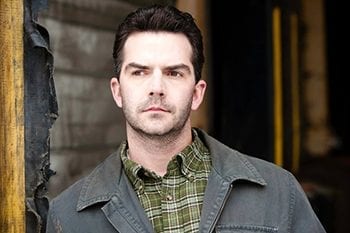 Seven years ago, Ron Bush found himself in Washington, D.C., toiling away at a job that made him miserable. Thinking about what he might do, he looked back on his first foray into acting when he was an undergraduate at Georgia Tech and Sweet Home Alabama was filming in Georgia. A friend had dragged him to an open call, and he ended up getting some background work—you can spot him as the cashier in the Deep South Glass shop—and meeting Patrick Dempsey and Rhona Mitra.

At the time, even though he was racking up some experience working on Tyler Perry movies, he wasn’t so sure about an acting career. He decided to work for a few startups before getting his MBA at the J. Mack Robinson College of Business at Georgia State. But now he was ready to take the plunge, and in 2009 he moved to Baltimore and then New York to pursue acting full time.

Since then he’s had speaking roles in more than 60 projects, including It’s Always Sunny in Philadelphia, Louie and St. Vincent.

“I woke up that day thinking I’d just be doing another day of background work,” he said of St. Vincent, “but then I wound up having lines, in a scene, with Bill freaking Murray and Naomi Watts. I was on cloud nine all day.”

Last spring, he made another big move, this time from New York back down to Atlanta.

“The entertainment industry is blowing up down here, and I wanted to be here while it expanded,” he said.

Even after his career switch, he still uses his MBA every day.

“As an actor, you are running your own sole proprietorship,” he said. “If you don’t have an understanding of marketing, accounting and contract law, you are setting yourself up for scams or not being able to market yourself properly to the entertainment industry.”

Back in New York, he ran workshops on marketing for actors, and he encourages all aspiring actors to take a marketing class somewhere. He plans to start the workshops back up in Atlanta soon, but for now, he’s focusing on his own film and TV work.

You can catch him next in a co-star role in the season 2 premiere of Netflix’s Bloodline.