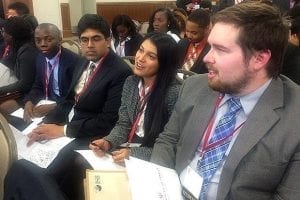 Now in its fifth year, the two-day case competition is held annually on the weekend preceding Martin Luther King Jr. Day. Teams from 35 universities are selected to participate through an application process, and all teams must include at least two underrepresented minority students. This is the first year the Robinson College has competed.

The students immediately rose to the challenge according to William Bogner, assistant dean for undergraduate programs, who served as their adviser. “Despite receiving the case as they were headed into fall finals, Dylan, Dimitri, Miriam and Arvind jumped right in, then worked over the holidays and into the evening every night in the week leading up to the competition.”

Target Corporation provided the hypothetical case. Teams were charged to deliver a strategy for the retailer to deliver on its “Expect More. Pay Less.” brand promise for LGBT (lesbian, gay, bisexual, transgender) millennials.

“We’re very proud that our team advanced from the qualifying round to the semifinals, especially since this is the first time Robinson has competed in the National Diversity Case Competition,” Bogner said.

The largest business school in the South and part of a major research institution, Georgia State University’s J. Mack Robinson College of Business has 200 faculty, 8,000 students and 75,000 alumni. With programs on five continents and students from 88 countries, the college is world-class and worldwide. Its part-time MBA is ranked among the best by the Bloomberg Businessweek and U.S. News & World Report, and its Executive MBA is on the Financial Times list of the world’s premier programs. Located in Atlanta, the Robinson College and Georgia State have produced more of Georgia’s top executives with graduate degrees than any other school in the Southeast.