Smoking is not allowed on China’s sleek high-speed trains, so the men anxiously wait for those precious moments when the train pauses at a station long enough for them to jump out and quickly inhale a cigarette before resuming their travels.
Anna Varela

SHANGHAI, China — As the bullet train approaches the station, slowing for one of its stops on the nearly six-hour journey from Wuhan to Shanghai, the men wait and seem to hold their breaths.

These passengers have drawn cigarettes from their packs. One man has even put one to his lips. But he doesn’t light it.

Smoking is not allowed on China’s sleek high-speed trains, so the men anxiously wait for those precious moments when the train pauses at a station long enough for them to jump out and quickly inhale a cigarette before resuming their travels.

It’s a scene that reflects the tension in modern China, the world’s biggest producer and consumer of tobacco, but also a country where government officials are starting to take steps to curb the high rate of smoking.

The Industry in China

Smoking is an almost exclusively male habit in China, where slightly more than 45 percent of adult males smoke, while just 2 percent of women light up. The industry generates about 8 percent of China’s gross domestic product, providing jobs at farms, factories and shops where packs of cigarettes are often the highlight of window displays.

To get a feel for the importance of the tobacco industry in the most populous nation in the world, visit the Tobacco Museum in Shanghai, the largest city in China.

The building resembles a Mayan temple, with friezes depicting key moments in tobacco history, including the arrival of Europeans in the New World, which launched international trade in tobacco, and a row of decorated columns reaching into the sky, like giant cigarettes waiting for a light. The massive Shanghai Cigarette Factory sits across the street, part of China Tobacco, the state-owned firm that churns out about 2.5 billion cigarettes a year from plants across the country, almost all of them for domestic consumption.

Inside the museum, nearly 60,000 square feet of display space offer a tribute to the history, cultivation and cultural significance of smoking in China, starting with the introduction of the crop to the country in the 16th Century. The museum includes cases filled with smoking tools used by ethnic groups across China, the Panda cigarettes favored by Deng Xiaoping, artful displays of cigarette packs and advertising posters through history, and detailed information about tobacco growing methods and the struggle to reduce foreign influence as the industry grew.

In one section, a wall marked “Great Contributions to the Society” features a chart showing the ever-rising amount of tax revenue generated by tobacco sales and flowing into the central government’s coffers.

The room devoted to tobacco control notes that legislation prohibits smoking by primary and middle school students, and says that to address “the need of adult smokers,” the industry is focused on “tar lowering and harm reducing” in its cigarettes. Photos depict researchers in white lab coats striving to produce safer cigarettes. A carton displays Super Lights, with a package that boasts in red type “low tar & low free radical.” (It’s not unlike the U.S. tobacco industry’s past efforts to claim that lower tar could make for a safer smoke. Scientists have found the opposite to be true – lower tar tends to lead users to smoke more and inhale more deeply – and tobacco marketers are no longer allowed to make low-tar health claims in the U.S.)

The Smoking and Tobacco Control Hall does not highlight the fact that nearly 1.4 million Chinese people are killed each year by tobacco-related diseases, a number that will only grow larger if smoking continues at the same pace. 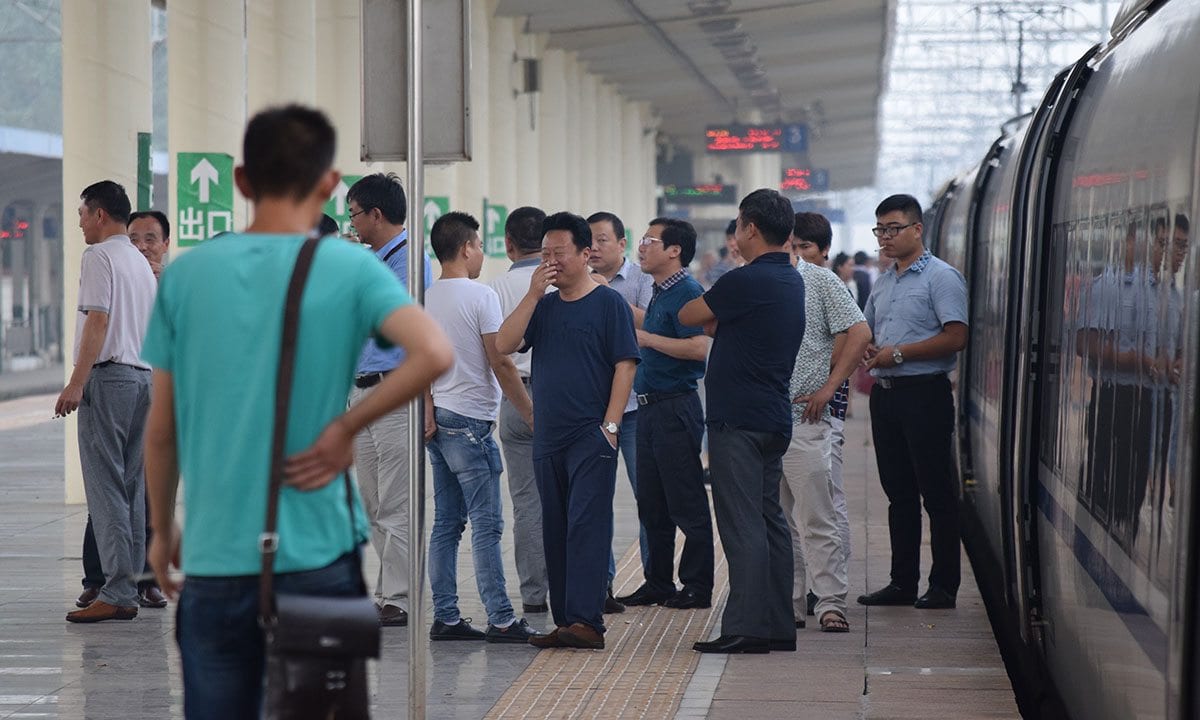 Chinese men steal a quick smoke as the bullet train stops briefly on its route from Wuhan to Shanghai.

The national government has taken some steps to limit where people can light up. Communist party leaders have been banned from smoking in public and rules have recently gone into effect to restrict tobacco ads outdoors, in mass media and in public places.

Large cities such as Shanghai had already banned smoking on public transit and in the public spaces in many hotels. Beijing, the nation’s capital, adopted a smoking ban for transit, restaurants and offices June 1.

Though many question the commitment to enforcing the new rules, Fu Hua, the former dean of the School of Public Health at Fudan University in Shanghai, calls the effort in Beijing significant.

“Top leadership wants change,” he says. “This is a very good sign that in the capital of China we have this policy.”

In recent years, China’s cities have emerged as leaders in smoking control efforts.

Michael Eriksen, dean of the School of Public Health at Georgia State, says that “bottom up” efforts to build support for smoke-free zones at the city level are showing promise.

Eriksen and Pam Redmon, executive director of the school’s China Tobacco Control Partnership, have been working for years to build partnerships with public health leaders in cities across China to advise them on how to create and enforce smoking regulations, and craft messages that encourage people to quit smoking or never start.

One of the key steps is to create smoke-free zones to protect non-smokers.

“The idea is to shift the social norms in China, to make smoking less socially acceptable,” Eriksen said. “Eventually, that will lead to more Chinese smokers wanting to quit, and fewer people taking up the habit.”

Public health and governmental leaders in several Chinese cities have shown interest in curbing smoking and the school is currently working with five cities to develop programs tailored to their populations. They are Chongqing (with a population of 33 million), Chengdu, Wuhan, Xi’an (famous for its Terracotta Army) and Xiamen.

Those five cities have a total population of more than 69 million people. As Eriksen notes, targeting cities with willing public health and governmental partners can have a huge impact.

Redmon, who has been to China three dozen times since 2008 for her tobacco control work, said surveys show that a growing percentage of smokers want to quit and people are starting to take the threat of secondhand smoke more seriously.

“Cities have an important role to play in changing the landscape of tobacco use, and may be the driving force to change the social norms of tobacco use in China,” she says.

“It’s exciting to see the work that’s being done to protect non-smokers from the dangers of secondhand smoke, to encourage smokers to quit, and to prevent young people from starting.” 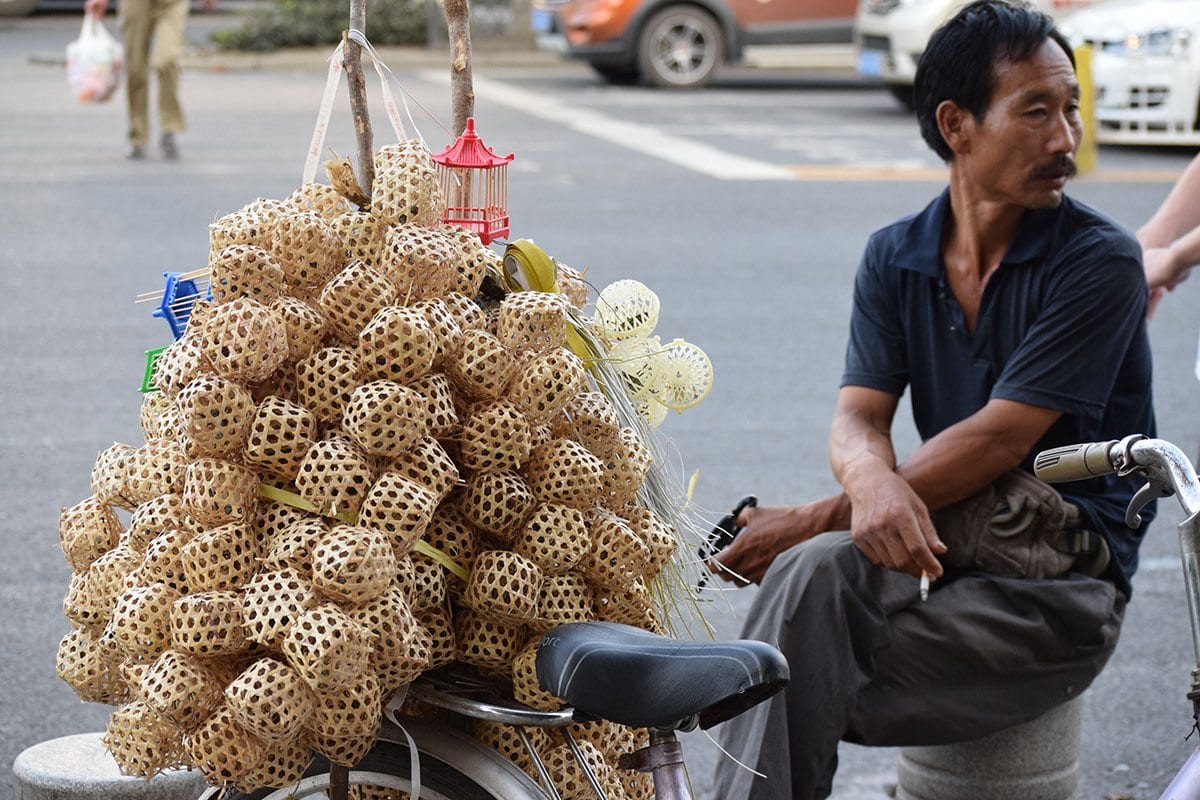 A cricket vendor smokes on a busy corner in Wuhan’s riverfront district, which is popular with tourists.

Hangzhou: A Pioneer in Smoke-Free Hospitality

Hangzhou, a provincial capital of roughly 6 million people, is a pioneer in building a smoke-free hospitality industry.

The city’s West Lake area has been celebrated for its beauty for more than a thousand years and it’s an easy 1-hour bullet train ride from Shanghai. It’s a popular destination for walking and cycling along the waterfront and drinking the locally grown Longjing, or Dragon Well, tea.

Fang Zhou, the director of quality control for the popular Grandma’s Home restaurant, is in charge of enforcing smoke-free regulations, which first went into effect at the chain’s Hangzhou locations under a voluntary program in 2011.

“Of course, at the beginning, it was very difficult,” she said through an interpreter. “Now, the whole social atmosphere has changed. It is different … In most restaurants [in Hangzhou], you cannot smoke.”

Today, things are easier because most of the staff is young, they don’t smoke, and they don’t mind asking patrons not to bother others with second-hand smoke. Fang says the restaurant’s business has not suffered from going smoke-free. In recent years, more Grandma’s Kitchen locations have gone smoke-free across China, though mostly in cities that have also shown local government support for smoking controls.

A few miles away, the managers of the Sunday Sunny Resort allow smoking only in a handful of designated outdoor areas. As part of a renovation project, the management is trying to make those gathering places more comfortable so smokers won’t be tempted to light up inside when the weather is bad.

Five years ago, the staff removed all of the ashtrays and matches from the guest rooms and put up more than 500 “no smoking” stickers around the complex, says Zhuming Zhao, the human resources manager. But really, the first step was to reduce smoking rates among its 150 staffers. The hotel offered training and special recognition for those who quit. When it was time to hire new people, Zhuming favored non-smokers. Sunday Sunny Resort has gone from having 40 percent of staff who smoke to less than 10 percent, she said through an interpreter.

Zhuming applied that enthusiasm to helping her daughter plan her own smoke-free wedding party. That’s unusual in China, where the norm is for hosts to allot a pack of cigarettes per guest and the bride is expected to light the first smoke for each male guest. (In some cities, tobacco companies even sponsor mass weddings.)

In the first two years of the Sunday Sunny Resort’s smoke-free work, event organizers would sometimes get angry when staff asked them or their guests to stop smoking. “Some would say ‘we won’t host meetings at your hotel again’ or ‘we won’t have dinner at your hotel again,’” general manager Ruiguo Huang said through an interpreter. A small handful of belligerent guests were quietly put on a hotel blacklist.

But the city began adopting smoking regulations that helped back up the message coming from hotel staff and, like Grandma’s Kitchen, managers say their business is doing well. Some day, Ruiguo hopes the hotel will become a destination for people who want smoke-free accommodations.

For now, that’s a rare request in China.

A warning label on a carton of cigarettes on display at the Tobacco Museum in Shanghai.

Wuhan, a city of nearly 10 million people along the Yangtze and Han rivers in central China, is in the early stages of its efforts to carve out smoke-free zones in 5-10 cybercafes, where air quality monitors will be installed and volunteers will help with enforcement, and to persuade up to three university campuses to go smoke-free.

The work includes surveys of local residents to get better data on smoking rates, socioeconomic factors tied to smoking in the city, and attitudes about smoking and exposure to second-hand smoke.

According to officials leading the work at Wuhan’s Centers for Disease Prevention and Control (WHCDC), the most recent data show that about 20 percent of middle school boys smoke as do 29 percent of staff at hospitals, clinics and other public health facilities, putting the city in the middle of the pack in China. Their data show that middle school smokers aren’t merely experimenting because many are consuming 10-15 cigarettes a day.

On the positive side, the campaign has drawn interest from local media, and the city’s deputy mayor signed a letter of commitment pledging support. The city has already banned cigarette advertising on billboards and in mass media as part of a “Civilized City” campaign.

Wang Zhou, Director of WHCDC, said public health workers in his city are slowly making progress. And they know they have a long road ahead.

It may be useful to remember that the norm in the U.S., where the vast majority of people do not smoke, has arrived after decades of public health advocacy, government regulation, restrictions imposed by employers and the determined efforts of individuals to kick the habit.

“This is a big issue, a big problem in public health in Wuhan, and also in China,” Wang said.