They Love What They Do

It's not monkey business at MailChimp. The tech company with the hip corporate culture is home to these successful Georgia State alumni.
By Doug Gillett

Go about a mile and a half up Marietta Street from Georgia State’s campus, hang a left on Means Street into an industrial corridor of 19th century warehouses and you’ll find yourself at the offices of MailChimp. Inside, skateboard decks and graffiti decorate exposed brick walls, and dozens of plush primates dressed like a mail carrier — Freddie, the company mascot — are perched pell mell. You might not realize you’ve ended up at one of the fastest-growing tech companies in the country, but that’s exactly what MailChimp is.

It started in 2001 as an offshoot of Rocket Science Group, a Web design firm founded by entrepreneurs Ben Chestnut and Dan Kurzius. It soon became so popular they devoted themselves fully to MailChimp and the wide range of Web and mobile applications it’s built. Today, more than seven million people, representing everything from small businesses to Fortune 500 companies, use MailChimp to create electronic newsletters and marketing campaigns.

The company, whose tagline is “Love What You Do,” prides itself on its creative culture, employee empowerment and irreverent approach to making email marketing, well, not boring. It’s working: Last year, MailChimp sent more than 70 billion emails. That staggering number will increase this year. The company announced in June it has more than 10,000 new users signing up each day and is now sending more than 11 billion emails per month. In December, the company announced it’s moving to larger space in the redeveloped Ponce City Market, the former Sears distribution center just east of downtown.

Given the innovative environment and short distance between MailChimp and Georgia State, it’s no surprise more than a few Panthers have landed there. These alumni came from different starting points on Georgia State’s campus, however, and some aren’t the kind you’d expect to work for a tech company.

Says Mark Surber (B.A. ’05), a legal assistant who graduated from Georgia State with a degree in art history: “There is a trust that allows us to really be creative and pursue things that wouldn’t be allowed if we were told, ‘Here’s a list of things you have to get done, here’s the way it has to be done, your deadline is this.’ We can find our own way to an answer.” 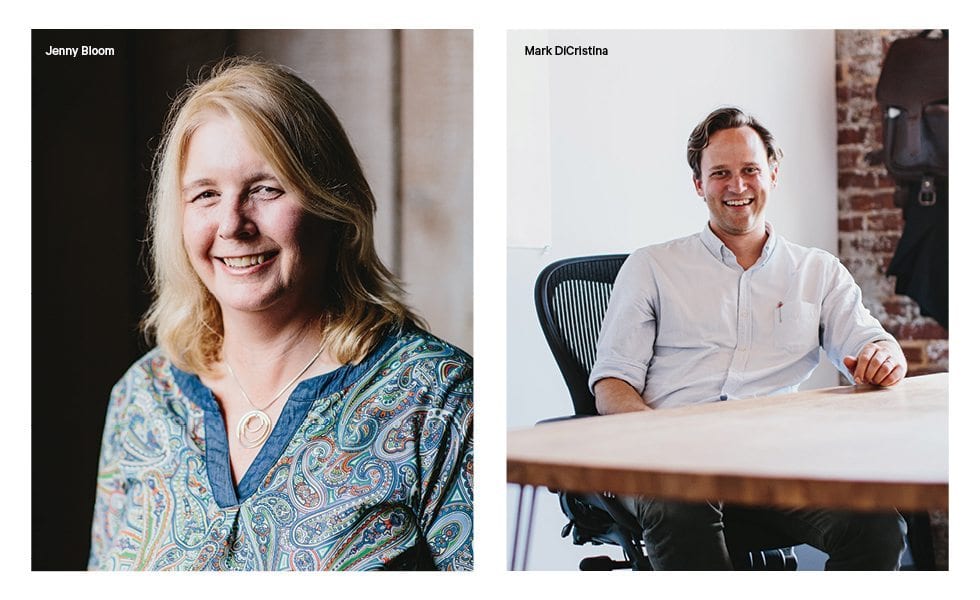 Of all the Georgia State alums working at MailChimp, Jenny Bloom (MBA ’94) and Mark DiCristina (MBA ’13) probably followed the most conventional route — MBA at the Robinson College of Business, management position at MailChimp. Bloom is the chief financial officer and DiChristina is marketing director. But that hardly means their route was a direct one. Nor was it an easy one for either of them.

“I think I took the maximum amount of time to finish [my MBA],” laughs Bloom, who took one class a quarter for four years and change. During that time she moved from an accounting position at Days Inn to one at Saab. She went on to work for a series of tech companies, including MP3radio. com, where she met the MailChimp founders before the “tech bubble” burst in 2000. Bloom started her own accounting practice after MP3radio shut down and Chestnut and Kurzius’ Rocket Science Group was one of her first clients.

DiCristina, likewise, describes his four-year pursuit of an MBA as “slow going,” though he, too, was working the entire time in addition to raising two small children. He came to MailChimp in 2009 after leaving Decatur-based Paste Magazine, which was struggling in the wake of falling ad revenues.

“I really needed a job,” he remembers. “We were pregnant with our second child at the time, so I was looking for anything I could find where I could tolerate coming to work every day. Initially I just thought, ‘This looks like it’s going to be OK for a while, and we’ll see how it goes.’”

Looking back, though, DiCristina says he “hit the jackpot” with MailChimp.

In this age of innovation, Georgia State educators are turning the traditional classroom model on its end
By H.M. Cauley
A Georgia State scientist and his protégé are part of a team that puts pre-programmed tablets into the hands of children in remote international villages and in the rural South. Amazingly, the outcomes are the same. With little or no instruction, they're teaching themselves to read.
By Tony Rehagen

“The general atmosphere is very fastpaced, which is great,” he says. “It’s highly collaborative, there’s not a lot of friction around getting things done, and with the collaboration comes this attitude of helpfulness. I think everyone really has a mindset of doing what’s best for our customers and what’s best for everyone at MailChimp, not just for themselves.”

Bloom agrees. “I’ve never worked with such smart, talented people, and it’s great to be able to do that,” she says. Her one caveat? MailChimp has grown so fast since she joined in 2010 there are almost too many smart, talented people to keep track of. “Up until about 150 employees, I knew everybody here,” she says. “Now I see somebody and I have to double-check that they’re an employee.”

Kiel Hughes (B.S. ’13) didn’t have to worry about finding a job when the tech bubble burst. He had to worry about going to war. Just five months after enlisting in the Air Force, then 18-year-old Hughes watched on TV as United 175 hit the World Trade Center. A few months after that, his boots were on the ground in Afghanistan. After a tour of duty in Afghanistan and two more in Iraq, readjusting to civilian life was a struggle.

“It was near impossible at first,” Hughes remembers. “I separated off of active duty in 2005, and I didn’t actually make the decision to go back to school until 2007 because I was having such a hard time dealing with it. In those two years I probably had about 10 different jobs, and I realized that really wasn’t the way to live my life.”

With some help from the GI Bill, Hughes enrolled in engineering classes at Georgia Perimeter College. He had problems with the lab sciences, but he excelled in his math classes, and upon transferring to Georgia State in 2011, he found math professors who were “nothing short of amazing.” In May 2013 he earned a degree in mathematics and became the first member of his family to graduate from college. Just three weeks later MailChimp offered him a job. As a delivery engineer, Hughes helps  make sure all those e-mails MailChimp processes each month go where they’re supposed to.

Hughes is confident he’s found his niche at MailChimp, so much so that if he could go back and tell his 18-year-old self where life was going to take him “it would probably be a complete surprise,” he says. “Honestly, when I was that age, I had no idea I would even go to school.” 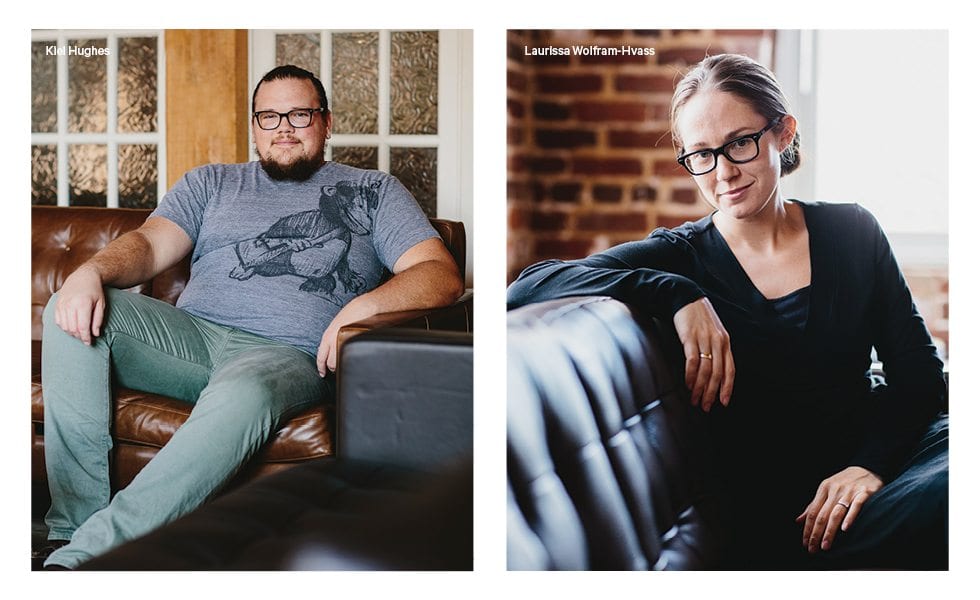 “I didn’t like programming,” she says, “so I ended up switching from computer science to a discipline with a language that I thought I was a little bit better at — English.”

After earning her bachelor’s degree at Clayton, Wolfram-Hvass came to Georgia State for her master’s and continued straight into her pursuit of a Ph.D. At the same time, she was doing a fair bit of technical writing, which spawned an interest in user experience and consumers’ interaction with technology.

“It was a good fit for me,” she says. “I left computer science and went to English, and then found my place at the intersection of the two.” For her doctoral dissertation on rhetoric in the user-experience (or “UX”) design process, Wolfram-Hvass drew upon her Georgia State network to get connected with designers and researchers. One of them pointed her to MailChimp.

“The more I learned about the company, the more I thought, wow, they’re doing new things and this would be a really cool place to do my research,” she recalls. “So I told them, ‘I want to work with the UX team for six months, 32 hours a week. Can I come in, observe, listen, watch as you work and conduct interviews? In return, I’ll work for you. I’m a writer, I have a degree in English, I’ll do whatever you need me to do in exchange for being able to watch your team do what it does.’ And they said yes.”

So Wolfram-Hvass spent six months as “a researcher doing research about researchers conducting research,” and by the end of it, she had more than a dissertation. She had a job offer.

“I wasn’t in it for a job,” she says. “I didn’t really know where I would be or what I would end up doing after it was done, but they asked me at one point, ‘So with your dissertation finished, what do you plan to do? Would you consider staying?’”

Now, as a UX design researcher, she helps MailChimp’s designers and developers figure out how to make the system easier to use. She admits some people find it strange she landed at a tech company after switching from computer science to English, “but in reality, it couldn’t be a more perfect fit.” 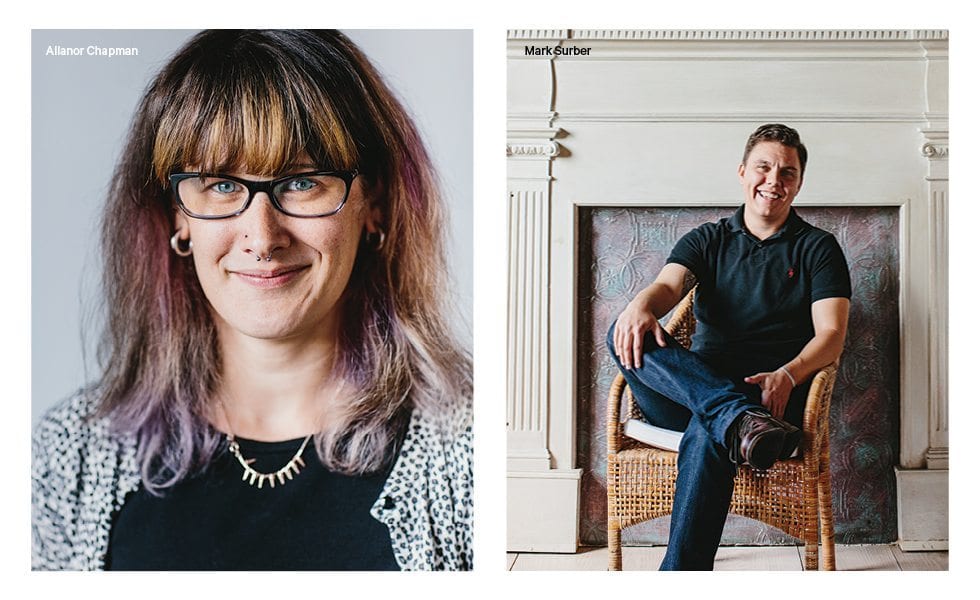 If an English degree sounds like an odd way to get one’s foot in the door of a tech firm, an art degree might be even stranger. But Ailanor Chapman (B.F.A. ’06) and Surber say it’s not as weird as it sounds.

After earning her photography degree, Chapman’s first stop was at KEH, a used camera dealer in Smyrna, Ga. She soon found she enjoyed working on the company’s website almost as much as she liked working with cameras. She began teaching herself some basic programming skills and by December 2009 she was moving up through the ranks of MailChimp’s techsupport department. Surber originally had plans to pursue a photography degree before finding he liked the historical side of art better. His first job out of college was working in the slide library at Spelman College, doing research and helping to build a digital platform the professors there could access. As he kept tabs on jobs around Atlanta that involved similar responsibilities, he came across an opening in the compliance department at MailChimp.

“That position required a lot of reading, research, stuff like that,” Surber says. “So I applied for it, and because of how much work I’d done with research and writing in that regard, they said, ‘We think you’d be a really great fit,’ and gave me a position.”

Today Chapman is in quality assurance, while Surber researches and advises on potential legal issues with the content MailChimp’s users might be sending. And they don’t sound like they have many regrets.

“I didn’t know where my path was at first,” Surber says, “but I knew that the skills I had developed at Georgia State were going to give me tools that I could transfer anywhere. Because anywhere you go, you’re going to need to acquire really good writing and research skills, and being able to decipher what’s art, what’s fiction and what’s somewhere in between.”

Getting to solve people’s problems and “find order in chaos,” Chapman says, makes her job immensely satisfying. The people she works with do, too.

“It’s a great company to work for,” she says. “You feel valued as an individual contributor and as a contributor to a larger product. I’m lucky to be here.”