Since 1963, the Georgia State Alumni Association has recognized outstanding alumni with its Distinguished Alumni Awards. Meet the 2014 winners.

Georgia State celebrated the achievements and educational experiences that helped inspire its 2014 Distinguished Alumni Award Winners at a ceremony in October.

“It’s exciting to be able to honor four alumni who are not only leaders but leaders in such a wide variety of fields,” said Christina Million (MBA ’10), associate vice president for alumni relations at Georgia State and associate vice president of the school’s alumni association. “This group represents government, education, business and health care — all of which impact our lives on a daily basis. We hope that they serve as examples both to the rest of our alumni community and to the current Georgia State students following in their footsteps.” 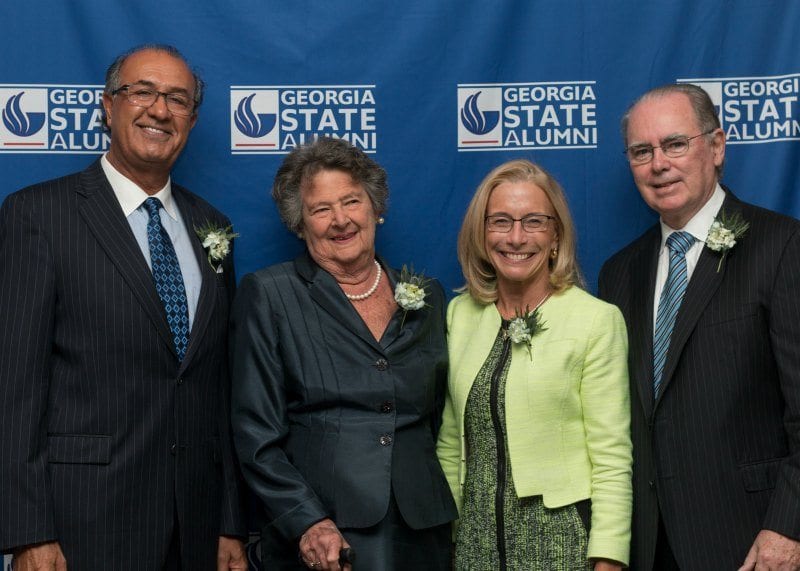 This year’s award recipients are:

Eva Galambos (Ph.D.’69) — As a member of the first class of women to receive Ph.D.s at Georgia State, Galambos was a pioneer as a student. She went on to become a pioneer in local government as well — she was elected the first mayor of Sandy Springs in 2005 after leading a three-decade quest to incorporate the north Atlanta suburb as an independent city.

Sue Henderson (B.S. ’75, M.Ed.’78) — In August 2012, Henderson, then the chief operating officer and vice president of institutional advancement at Queens College in New York, was named the first female president of New Jersey City University. There, she is working to engineer a transformation similar to the one happening at her alma mater: raising graduation rates at an urban public university with a high percentage of lower-income and first-generation students.

Eric Joiner (B.B.A.‘66, MBA ’69) — Joiner wasted little time in putting his Georgia State business degrees to use in the real world. Just three years after completing his MBA, Joiner and Gerald Allison founded AJC International, which has since grown into one of the world’s largest frozen-food marketers and distributors. He currently serves as chair of the Robinson College of Business’ Board of Visitors, and is a longtime supporter of programs both at the Robinson College and university-wide.

Iqbal Paroo (B.B.A. ’72; M.H.A. ’75) — As he recovered from a traffic accident that cost him his left leg as a teenager, Paroo got an up-close look at how health care is administered — and decided it could be done better. As managing partner of Paroo and Associates, he has provided expertise and guidance for health care systems, startup companies and academic health institutions around the world — as well as U.S. presidents — with a particular emphasis on emerging countries and markets. He has served on the Georgia State University Foundation’s Board of Trustees and received an Alumni Leadership Award for lifetime achievement from the Robinson College of Business in 2013.

Henderson said the award comes as a complete surprise. “I was pretty blown away, because all I was going to do when I graduated from Georgia State was be a math teacher,” she said. “I never would’ve dreamed I’d be doing what I’m doing today.”

Henderson’s ties to her alma mater have enabled New Jersey City University to emulate many of the methods implemented by President Mark Becker to increase student retention rates at Georgia State. Joiner, too, has maintained a close connection with Georgia State, due in no small part to the fact that his professors cared enough to stay connected with him.

“One of the great things about Georgia State is they have a great faculty,” said Joiner, who went straight from earning his bachelor’s degree to beginning his master’s, taking night classes the entire time. “There was a professor down there, Dr. David Schwartz, who became a good friend of mine. And he was very supportive of what I was doing in the business world, and he helped me with getting the right attitude and the right frame of mind — he really made you feel like anything was possible. It was more than just coursework, it was that mentoring and caring by the faculty that was of tremendous value to me.”