The Force is Strong with this One

The Force is Strong with this One

So, can this be true? You’re an attorney, a teacher and working on dual masters degrees?

Well, I have a B.S. in biology from Virginia Tech — I have thought about medical school on more than one occasion — and a juris doctorate from The Appalachian School of Law with a ton of mediation and alternative dispute resolution and negotiation training. I was a public defender here in Fulton County for about three and a half years in the juvenile, felony fast-track, then the trial division, which really changed how I see the world. I wanted to try to “save the children,” or at least the ones in the greater Atlanta area, so I taught Law and Justice at Centennial High School in Roswell, Ga. 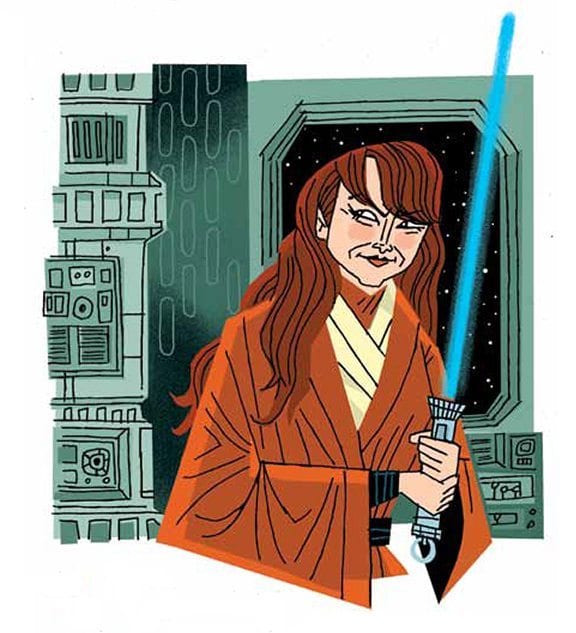 I thought if kids were taught about the laws and the consequences of some bad decisions that maybe I could keep them out of the system. Unfortunately, kids don’t listen to their teachers, of course, so I think I’ll try that approach again later, but as a guest speaker. I’d love to start a non-profit that would send attorneys into the schools to teach kids what some of the laws mean, and what they could mean to them on a personal level. Currently, I’m going back to my roots, heading back toward medicine — my entire family is in the medical field — and pursuing my MBA and Master of Health Administration (M.H.A.) here at Georgia State. When people ask me what I want to do, really, the only answer I have is, “Everything.”

I’d love to be able to work for Dragon Con or Lucasfilm full time, or something similar, but I’m also interested in healthcare, politics, public relations, marketing and making the world a better place. Being raised in hospitals, I love the atmosphere and the people there truly saving the world. The MHA program is really changing how I view the world and I can’t help but think about how to make things work more efficiently. Maybe I’ll take my knowledge and help some of the hospitals back home work on their wait times. I don’t know where I’ll end up, but I want to do it all.

What exactly does the director of Dragon Con’s Star Wars programming do?

My primary job is to coordinate the programming and events relevant to Star Wars and Star Wars fans for the world’s largest pop-culture convention, Dragon Con, held every Labor Day weekend here in Atlanta. What does that really mean? It means my list of things to work on for 2015 started in the spring of 2014. My team and I plan year-round to try to give fans the best experience possible in the form of fun immersive room décor, massive parties, meaningful and thought-provoking discussion panels, costume and trivia contests, and even kid-friendly events such as a foam Lightsaber School and a fun “pod race” where kids decorate boxes that they then wear for a race across the 10th floor of the Marriott Marquis. We try to make sure there really is something for everyone and are always trying to one-up ourselves.

What is the environment like behind the scenes at Dragon Con?

Behind the scenes, everyone has a purpose, function and “job.” It takes a lot of work and many volunteers to keep the party going 24 hours a day for four or five days. The majority of us don’t have professions that lead you to directly believe we’re qualified to be running over 3,000 hours of programming, but the show always goes on. Every celebrity panel you see has had at least eight volunteers working on some aspect to make it happen, whether it’s the director, the people coordinating travel arrangements, the guest transportation people, the handlers or the people running the video, lights and sound. The “for the fans, by the fans” is part of the charm and a big reason why it’s unlike any of the other big conventions. Sometimes it’s frantic, sometimes it’s calm, all of the time it’s fun. It’s family, both with the team of volunteers and with the fan family you only get to see once a year.

How did you get into this role, and how long have you been doing it?

I just completed my sixth Dragon Con as the director for Star Wars programming and I feel as lucky today as I did the day I “got the job.” It’s a labor of love, but I wouldn’t trade it. I started off in signage, designing and running signs and schedules between the hotels. Then I was the assistant director for information services, helping run all of the info booths, answering questions, and doing a lot of PR and customer service. While I love Dragon Con, and can appreciate so many of the pop-culture elements to it, Star Wars was my fandom. Seeing the Stormtroopers and Jedi running around, feeling like I was in the movies was what sold me on it to start with. So I really just got lucky when I was given the opportunity to be the director for all of the Star Wars programming. I feel even luckier now that we have new shows and movies coming out! 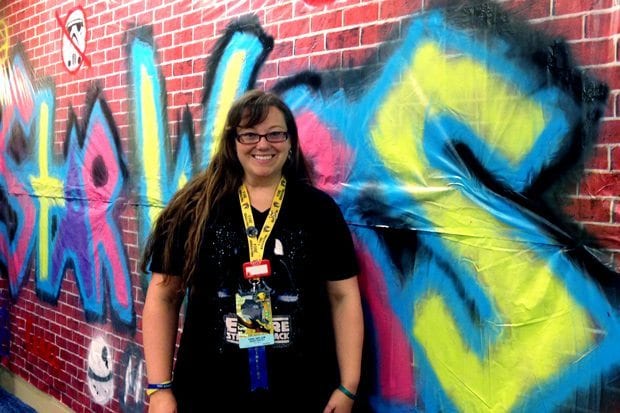 Just how big of a Star Wars fan are you? And who’s your favorite Star Wars character?

I’m a pretty big fan. Star Wars was a family affair — whether we were watching them as they came on television, or making it a fun night out when they were re-released in the theaters. We even lined up, as a family, to see the prequels. Even now, my mom knows to grab Star Wars stuff that’s on sale so we can give it away as prizes after our panels. I was never the person who could memorize the serial numbers or the droid names like the guys I knew throughout school, but I always loved it. I had a Darth Vader costume in junior high school that I wore backwards so I could look like I had Princess Leia buns from the front and Darth Vader from the back. Don’t ask me why I’ve always been Team Darkside, but he has always been my favorite. Of course, I also love the scoundrel Han Solo and think the Han and Leia Empire Strikes Back kiss is one of the best movie kisses of all time!

What are some of your favorite memories from Dragon Con?

My favorite memories are some of the behind the scenes things. How many people can say they got Carrie Fisher a Coke Zero or got to hang out with Billy Dee Williams? Or that well known, best-selling authors stop by just to say “Hi?” I’m very spoiled. Beyond the personal friendships I’ve made, really, my favorite moments are when the room pauses to think about something that was brought up in the discussion, or the kids running around in boxes they hastily decorated with their families or the young fan who has found his courage and will stand up and ask a question in front of a couple thousand people. Making people laugh, or smile or sometimes cry because something was heart-warming … that’s what makes it wonderful. Showing a couple thousand of my closest friends a good time and spreading the love of “Star Wars,” that’s what keeps me coming back.

As a fan, though, nothing compares to Carrie Fisher standing on a table 10-20 feet above the floor with her arms outstretched drinking in the standing ovation she received. She is Hollywood royalty — a perfect blend of old Hollywood glamour and new Hollywood grit. She is beyond entertaining and will have you laughing so hard your sides hurt. Because of Dragon Con, my fandom has grown to encompass so many things now — I love the pop-culture aspect of it, and the fact that you can find at least one other person who’s into what you’re into. I’ve met many of the Harry Potter actors, though Matthew Lewis, who played Neville Longbottom, is my favorite because we shared a love for Amy Winehouse. One of the few cosplays I’ve ever done at Dragon Con was dressing up as Amy Winehouse, back in probably 2008 before she died. Most people hadn’t caught on to how talented she was at that point, so no one seemed to get that I was dressed up — even with a white tank top that said “They tried to make me go to rehab and I said no, no, no.” Matt Lewis saw me lined up in the Walk of Fame, where the celebrities sit and sign autographs, called me over, and knew exactly who I was. He’d seen her in concert the week before, and we just chatted about her like we were old friends.

My other favorite Walk of Fame moment will always belong to TV’s Batman, Adam West. Beyond having such an iconic voice — he’s on Family Guy too — and being one of the best parts of my childhood — my brother and I loved the Batman reruns … BAM! — Adam West was the most charismatic gentleman I’ve ever had the pleasure of meeting. Even if he hadn’t have sung “Brandy, You’re a Fine Girl” to me, I’d probably still have been swooning over him.

What do you do in your free time, if you ever have any?

Free time in grad school equals studying and writing papers! Just like everyone else, I try to visit my family as much as possible — they live in Virginia and my grandmother is in Florida. I love Netflix and Amazon Prime, and I love to sneak away to Jekyll Island as much as possible. I am a massive football fan so I love the Falcons and try to not to miss watching my Hokies play. I ran my 5th Peachtree Road Race this summer which I hope will be something I can do for the rest of my life, even if I’ve been bad about continuing to train, catching up on sleep has been more of the priority lately.

I’m always looking to increase my volunteering activities with different charities in Atlanta, and most recently had a great time coordinating a Star Wars day at Children’s Healthcare of Atlanta’s Scottish Rite. I can’t wait to go back with the help of some wonderful Stormtroopers I’ve met thanks to Dragon Con. Of course, I try to stay up to date on all of the awesome Star Wars news as it keeps rolling in. Thanks J.J. Abrams … you keep distracting me from my homework with your clever tweets. It is arguably one of the best times to be a Star Wars fan. Maybe we’ll never eclipse the late 70s or early 80s, but we’re definitely up there. It’s an exciting time, made even more exciting because we have so many different mediums to connect through, to share stories, and to share our love of Star Wars.

A foam Lightsaber School for kids is one of the events Roatsey organizes as director of Star Wars programming at Dragon Con.